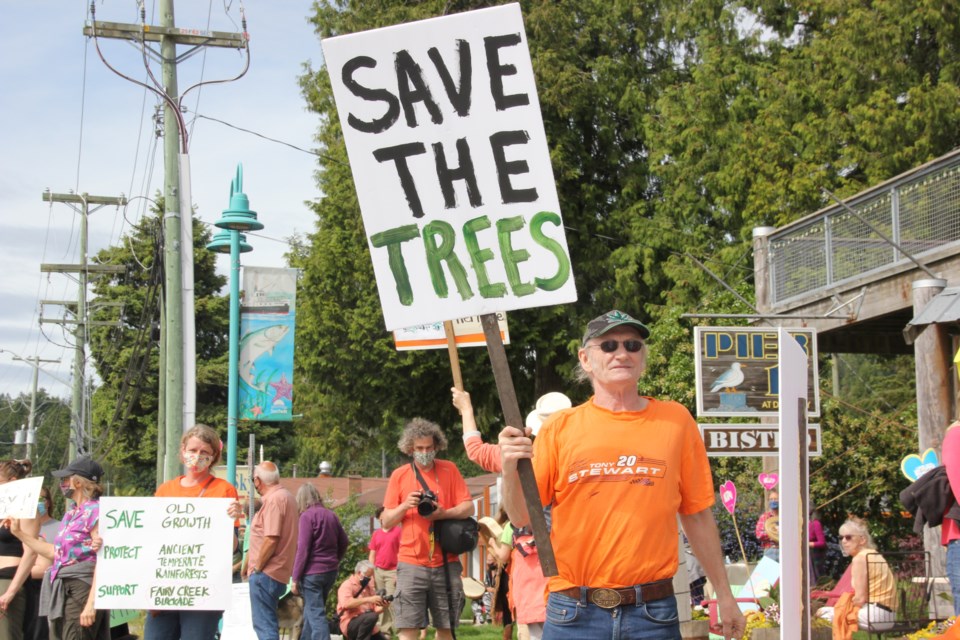 Around 100 people waved signs in front of MLA Nicholas Simons’ Davis Bay office on May 31, calling on the government to protect old growth forests. Keili Bartlett

More than 100 people gathered in front of MLA Nicholas Simons’ office in Davis Bay on May 31 to stand in solidarity with protesters at Fairy Creek on Vancouver Island.

Amidst noise from protesters and honking cars, organizers Shirley Samples and Heather Conn told Coast Reporter they are calling on the provincial government to follow the Old Growth Strategic Review, published last September.

“I think it's really important to acknowledge that the BC NDP is going against its own policies. Like, it had an old growth plan asking for a moratorium on logging on old growth,” Conn said, adding their concerns are not only for the trees, but the ecosystem and wildlife they support.

Samples said she wanted to show support to those taking a stand at Fairy Creek, even though travel to Vancouver Island is prohibited by provincial travel restrictions due to the pandemic.

The blockading at Fairy Creek rainforest near Port Renfrew has gone on for months, in an effort to protect what protesters say is home to the last un-logged watershed in the San Juan River system.

“I feel really strongly about how we need to stand up for the last two and a half per cent of our old growth forests. You think about that. That's 97.5 per cent [that’s] gone and they still want to pillage the rest,” Samples said. “Once they’re cut down and they’re gone, they’re gone forever.”

After the protest, Samples and Conn will send Simons a letter signed by protesters condemning the inaction of the provincial government and calling on the BC NDP “to protect British Columbia’s precious old-growth forests and to acknowledge these rare, ancient stands of trees as a vital source of biodiversity in the health of our region and future.”

The letter asks that the government revisit its environmental policies “to ensure future protection of not only Fairy Creek but all of the province’s few remaining old-growth forests.”

This isn’t the first time Sunshine Coast residents have protested in solidarity with Fairy Creek. Two youth-led protests were held earlier this spring, one in March and one in April for Earth Day.