A powerful message will be shared right on the sidewalks of one of Vancouver's major streets with the hopes of initiating more dialogue about B.C.'s ongoing overdose crisis.

The group Moms Stop the Harm (MSTH) has plans to leave chalk body outlines in highly visible places in and around Vancouver to mark International Overdose Awareness Day on Aug. 31.

Among the locations where the activists will leave their thought-provoking marks is on the Burrard Bridge pedestrian walkway and up Burrard St into Downtown Vancouver.

Additionally, MSTH plans to draw chalk body outlines on the pavement outside politicians’ offices in North and West Vancouver, as well as outside the office of the Minister of Health offices. MSTH will also do the same in select locations in New Westminster, Maple Ridge, White Rock, and Langley in the Lower Mainland, and elsewhere in B.C. in Kamloops, Port Alberni, and Nanaimo.

The chalk body outlines will also have purple ribbons; purple is the colour of International Overdose Awareness Day. 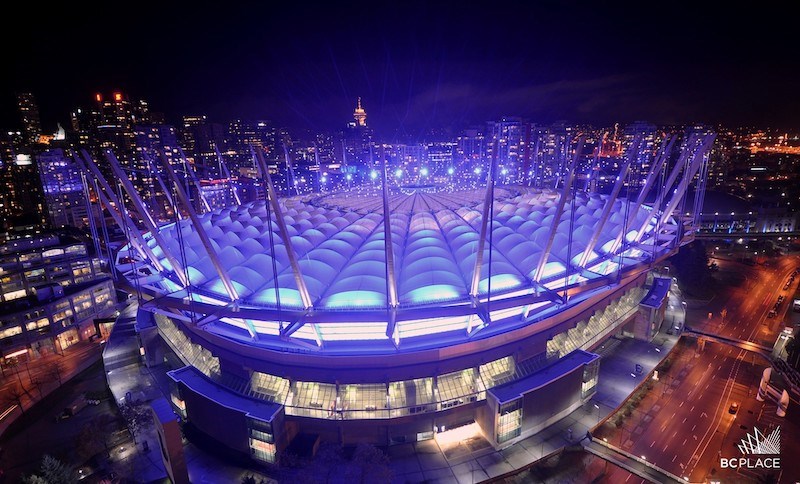 BC Place is among the Vancouver landmarks that will be illuminated in purple on Aug. 31 to mark International Overdose Awareness Day. By BC Place / Facebook

Last year's MSTH campaign for International Overdose Awareness Day was called "Lost Soles" and featured pairs of shoes tied to the Burrard Bridge to mark the "souls" lost to the overdose crisis with "soles." Protesters also blocked an intersection in the city.

"2021 is on track to be the worst year yet for overdose deaths in British Columbia and Canada. As B.C. enters the sixth year of this ongoing public health emergency, the slaughter continues," notes MSTH in a media release.

“We just want to bring more visibility to the opioid epidemic,” said bereaved North Shore father Matthew Witt, who will be one of the MSTH members drawing chalk body images in the area.

Felicella advocates for a regulated supply with low barriers for access, along the lines of the "compassion clubs" that operated before cannabis was legalized.

The B.C. government announced in July it will provide drug users with pharmaceutical alternatives to highly toxic illicit drugs without expecting people to enter treatment in order to reduce drug overdose deaths.

The program uses a pharmacy model.

When fully implemented, drug users who are at high risk of dying from toxic supply will be able to access alternatives including a range of opioids and stimulants as determined by programs and prescribers.

International Overdose Awareness Day was initiated in 2001 by Sally J Finn at The Salvation Army in St. Kilda, Melbourne, Australia. It has become the world’s largest annual campaign to end overdose and to remember without stigma those who have died and to acknowledge the grief of the family and friends left behind.

MSTH will also be holding a livestream Facebook Candlelight Vigil on Tuesday, Aug. 31 at 6:30 p.m. The event will be an evening of music and words of remembrance featuring guest speakers Lisa Lapointe, B.C. coroner, Dr. Jennifer Charlesworth, B.C. representative for children and youth, and Leslie McBain, co-founder of MSTH.