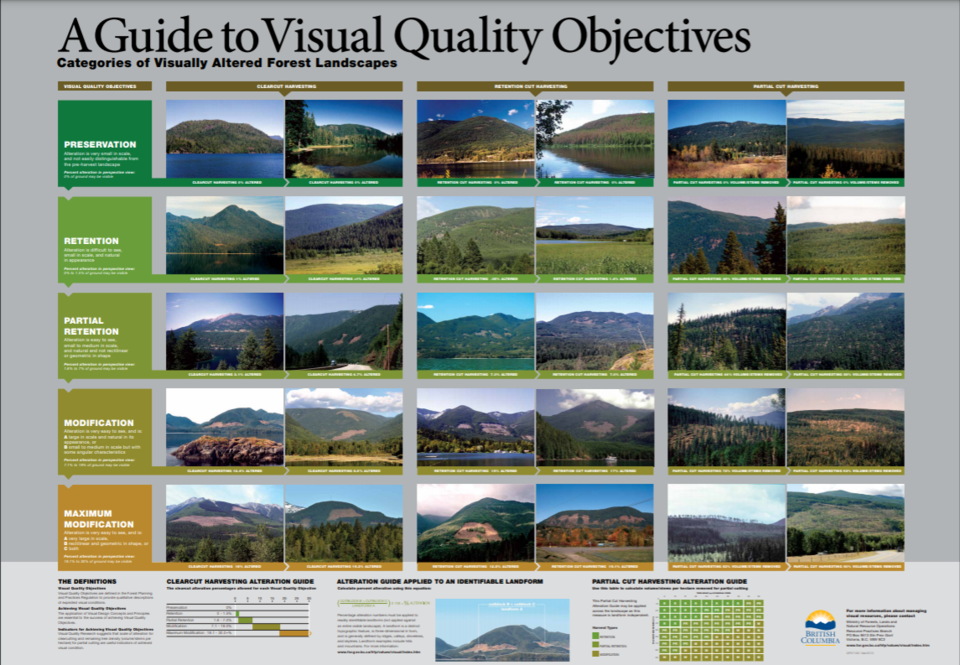 A guide of visual quality objectives shows the different views according to category.Ministry of Forests Lands and Natural Resource Operations image

The Ministry of Forests Lands and Natural Resource Operations and Rural Development (FLNRORD) is seeking to update the visual quality objectives (VQOs) in the Sunshine Coast Natural Resource District for the first time in decades.

While a public comment period was open from Jan. 15 to March 16 and then extended until April 30, some groups called on the ministry to extend the deadline once again, saying not enough of the public was aware of the draft order.

At an April 15 Sunshine Coast Regional District (SCRD) meeting, the Sunshine Coast Conservation Association (SCCA) asked directors to support an extension on the public input period, their letter to the board stating that “VQOs are established under the Government Action Regulation. Before deciding on VQOs, the FLNRO District Manager must consult with First Nations, industry, stakeholders, and the public. Unfortunately, FLNRO has neglected to consult conservation, recreation and tourism Stakeholders and Local Governments on this draft Order.”

The SCRD agreed to support an extension, and at the April 22 board meeting, Elphinstone director Donna McMahon suggested that FLNRORD expand their definition of local stakeholders to include local government, and the board carried the amendment. On April 28, the SCRD received notice from the ministry that the public input period would not be extended.

“This is a major revision of forestry practice on the Sunshine Coast, and it needs a full public consultation, especially with tourism,” McMahon said at the April 15 meeting.

Gibsons director Bill Beamish agreed, and asked for a letter to be sent to the ministry with the Town of Gibsons and the District of Sechelt as co-signers.

“I think this is important, I don’t think there has been sufficient awareness to this issue,” he said.

The last time the visual quality objectives were set for the Sunshine Coast Natural Resource District was in 1991 and they were updated through 1999, following a “robust stakeholder engagement” period, the SCCA’s executive director Suzanne Senger wrote to the SCRD.

“Twenty years later FLNRO has chosen not to refer this Order to local governments and posted the draft Order for public comment mid-winter amid a global pandemic with nothing more than a small ad in the local newspaper,” Senger wrote.

“Visual quality objectives are meant to protect the scenic landscape and our experience of the natural environment around us,” Senger told Coast Reporter on May 3.

On April 30, a ministry spokesperson told Coast Reporter via email that the public review and comment period lasted 105 days this year, and was advertised in “a number of newspapers.” The information and draft order regarding the VQOs for the region will remain available for public viewing until a final decision is made.

“The formal public review and comment period that closes on April 30 will not be extended, however a second round of targeted engagement with local governments and stakeholder groups will begin soon,” a ministry spokesperson said. “An additional information package will be sent along with the invitation to a virtual presentation/discussion with FLNRORD visual quality experts, likely targeting the audience by geographic area.”

Senger said the world has changed a lot since the 1990s both with different technology available for public engagement and land use in the area. The time period allowed, she said, is too short to get up to speed on a “hugely complex” area. In her letter to the SCRD, Senger pointed out that “the proposed VQOs are based on a 24-year-old policy and 8-10-year-old VLIs which don’t account for current conditions, climate change and cumulative effects.”

“We've got [an] over two million hectare forest district with polygons across the entire place,” she told Coast Reporter. “I can’t really be specific about where we think that the designation should change. That’s a way bigger conversation than we felt we could really address adequately in this really short time period. So our issue upfront has been process, and the real lack of engagement with local government and stakeholders.”

Senger said she believes the public does not have enough awareness about VQOs, and appreciates that stakeholders and local governments will be engaged in further consultation. She noted that several groups including the SCCA, Sunshine Coast Tourism, Howe Sound Biosphere Region Initiative Society and My Sea to Sky have been providing feedback and facilitating comments from the public.

“We can still engage our proponents, our constituents and members, and then include their feedback in our submissions,” Senger said. “So this is a really good step. We feel like FLNRO has heard that we have concerns about process and they're responding.”

Indian residential schools were designed with cemeteries
Jun 21, 2021 6:00 AM
Comments