A Vancouver home builder working to provide a solution to homelessness in the city got tired of waiting around for laws to accommodate the project and built a prototype.

Bryn Davidson is the co-owner of Lanefab Design/Build, a company that builds custom homes and infill mini-homes or ‘laneway houses’. A few years ago Davidson heard about the Partners on Dwelling (POD) program based in Portland, Oregon which is now the Kenton Women’s Village. The POD program facilitated the building of small sleeping pods that could be grouped closely together, it was this idea that got Davidson thinking his company could do something similar.

What are tiny houses/tiny townhouses?

His vision was a house with a footprint of less than 10 square meters and less than 4.5 meters tall, dimensions small enough their construction would not require a building permit. These tiny homes could then be butted up against each other and be kept on empty lots throughout the city. The smallest version of these homes would be just for sleeping in but Davidson’s design allows for the addition of kitchen and bathroom modules. 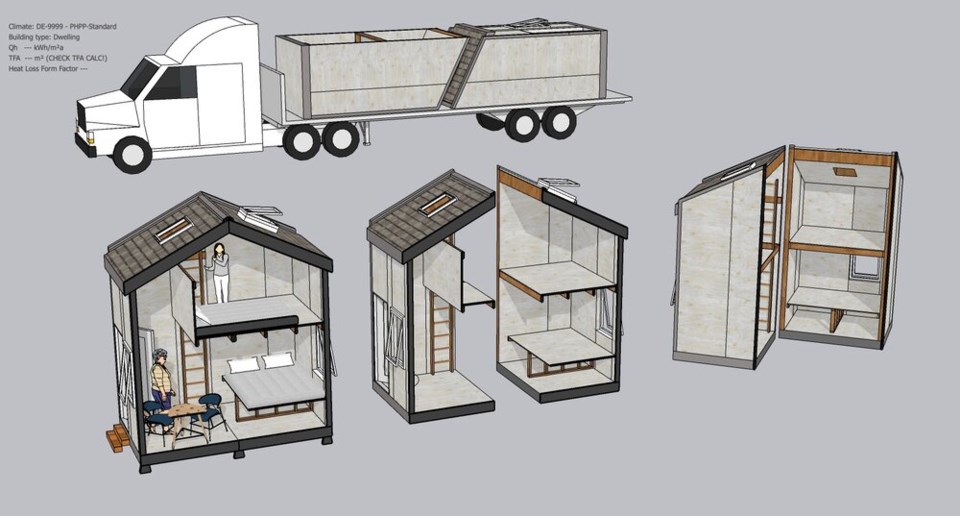 Bryn Davidson's tiny home renderings featuring different modules that could be added on to the initial bedroom space. By Bryn Davidson

In an interview with Vancouver Is Awesome, Davidson said although he had been working on the project for a few years, things really started to heat up in September when residents near Strathcona Park protested what they viewed as government inaction on the homeless population staying in the park.

"That's when I really just started working on it, doing more drawings and started putting out drawings for concepts of tiny house villages on the sites of these community gardens,” Davidson said. “People are talking about all these different things but there wasn't a whole lot that was actually happening.”

Davidson shared his design process extensively on his Twitter account. Renderings of the homes placed on the front lawn of Vancouver City Hall eventually garnered the attention of city counsellors Jean Swanson and Pete Fry, who pushed for the tiny home concept to be considered as an option for emergency housing.

In October he took his renderings to city council but the results of this attention were somewhat lacklustre for Davidson. When his idea came back to council after being studied for the project’s feasibility, staff ranked down the idea. Davidson says this was in part to building code and zoning hurdles the project would have to go through.

Lots of impassioned discussions about housing options at council today. It sounds like the substantial efforts around hotels etc. will take many months to enact.

In the meantime, we'll keep chipping away at the tiny townhouse concept with the idea. pic.twitter.com/6OkhmaJF15

Aside from the Strathcona Park protests, 2020 highlighted the need for additional sheltering for Vancouver’s homeless population in a big way.

"The COVID situation exacerbated everything because the shelter capacities were reduced,” Davidson said. “We saw the Balmoral and other buildings were basically closed and emptied so we had this kind of perfect storm of things that were pushing people onto the street."

Davidson added it is not just a Downtown Eastside problem, that just happens to be where it is most visible but the pandemic has exacerbated these already dangerous issues.

‘If you build it, they will come’

On Nov. 5, Davidson started construction on the first prototype of a tiny home in a parking lot on Annacis Island. On Dec. 10, Davidson started a GoFundMe campaign to help finance the project. Thirteen days later the campaign has reached $2,740 raised of its $8,000 goal. 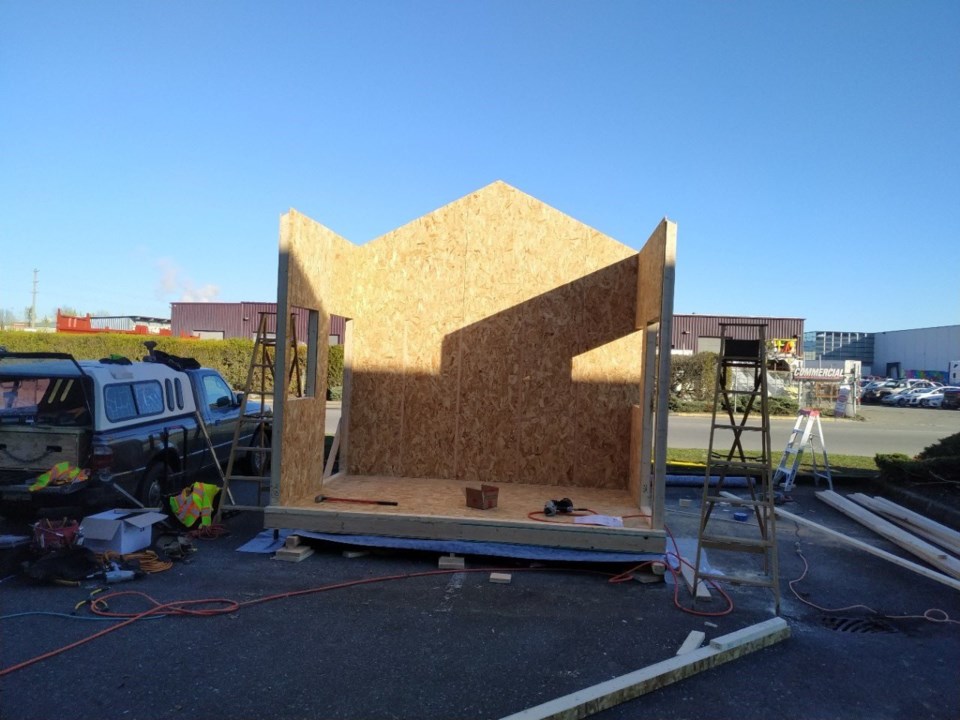 The early stages of Bryn Davidson's tiny house prototype in an Annacis Island parking lot. By Bryn Davidson
Ten days after creating the GoFundMe campaign, Davidson along with his girlfriend and son spent the night in the home.

“Without any heat hooked up it was still warmer than the almost freezing temps outside,” Davidson wrote of the experience on Twitter. “We didn’t need to zip up the sleeping bags”

Even with the prototype nearing completion, Davidson’s mission is far from over. The next steps include forming a partnership with a registered charity and getting the home in front of city officials so they can see a real-life example of what he proposed at council months earlier.

Davidson plans to accomplish this with the help of the Overdose Prevention Society.

When the prototype is completed, the tiny home will be moved to the OPS location on 58 and 62 East Hastings where it will serve as a support building for an Indigenous artist in residence at the society.

Sarah Blyth, a founding member of the OPS, says she is more than willing to showcase the tiny home, saying she is in support of showcasing all sorts of housing solutions.

"If you didn't have a place to sleep and you had to sleep in terribly cold and rough conditions, any human being needs a place to sleep that is warm and comfortable,” Blyth said. “When you don't have that life can be pretty difficult." 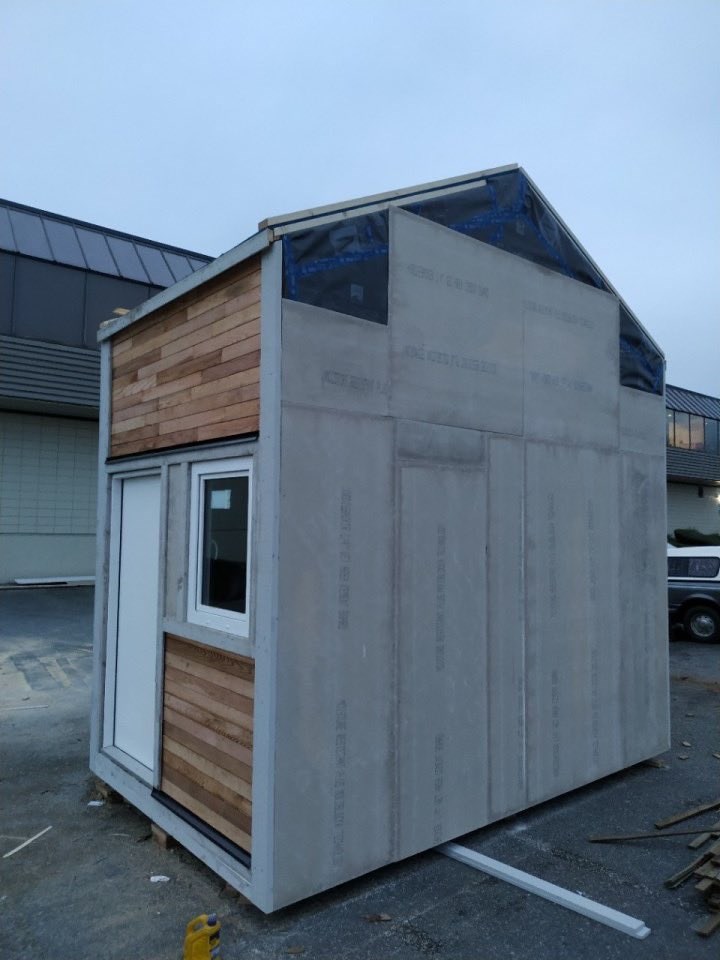 Blyth also hopes the tiny house will draw the attention of city officials and bureaucrats so they can get their eyes on it and have a real conversation about the possibilities.

Blyth added that she has asked unhoused people in the DTES about what they think of the tiny homes idea and the response has been purely positive.

The current version of one tiny house Bryn Davidson says comes with a $20,000 price tag. A number that could be significantly reduced by partnerships with charities and assistance from the City of Vancouver.

Park board GM given authority to seek injunction to clear Strathcona homeless camp
Dec 14, 2020 10:17 AM