The hateful messages are intended to make people of Asian descent feel unwelcome and have been turning up on walls and bus shelters in Lower Lonsdale.
Apr 7, 2021 3:33 PM By: Brent Richter 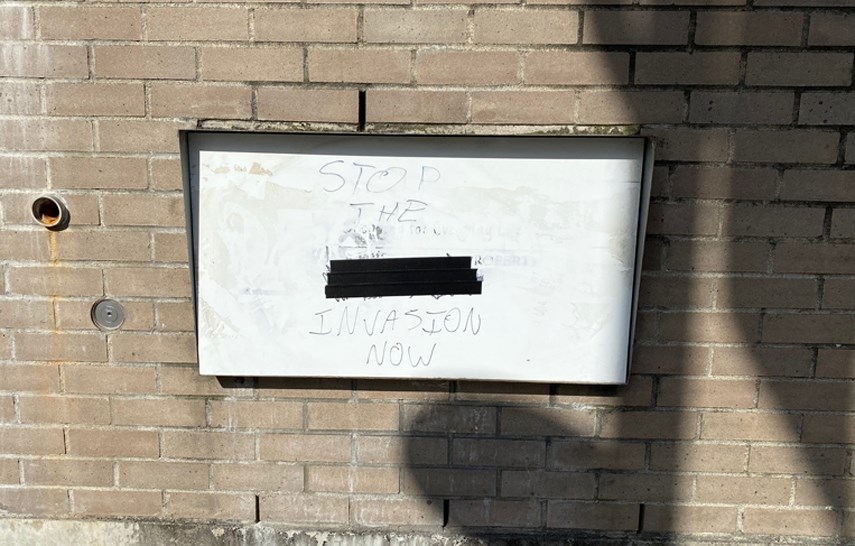 Anti-Asian graffiti on a wall in Lower Lonsdale on Monday, April 5, 2021 has been partially blacked out. North Vancouver RCMP are investigating.supplied

Anti-Asian graffiti scrawled around Lower Lonsdale is being roundly condemned.

The messages intended to make people of Asian descent feel unwelcome have been turning up on walls and bus shelters in Lower Lonsdale. It comes at a time of spiking reports of anti-Asian racism and hate crimes.

“Let's be clear that it's hurtful,” Ma said. “I worry about the message it sends to young people who are trying to find themselves and discover who they are. And I worry about the tone that sets for people in our community who are already feeling scared in the climate that's been set by the pandemic.”

The Vancouver Police Department has reported a 700 per cent increase in hate crimes targeting people of Asian descent, Ma noted.

Although high-profile public acts of racism are “unacceptable,” they are underscored by ignorance that is far more common in everyone’s daily lives, Ma said.

“Because we all have biases and blind spots in our experience and we can jump to conclusions on things that we aren't familiar,” she said.

It’s why individuals must actively challenge themselves to recognize and counteract their own discriminatory thought patterns. But, Ma added, people too often reject the notion that they may have racist tendencies themselves.

“People become immediately defensive instead of engaging in self-reflection,” she said. “We all have a lot of work to do with ourselves and in our communities, to be able to have real conversations about the sentiments that underlie some of these terrible acts.”

Just last weekend, Ma said she was on the receiving end of belittling comments by a constituent who wrongly assumed she was a newcomer to Canada.

North Vancouver resident Tessa Danelesko and her partner spotted the noxious graffiti on Sunday evening and reported it to the North Vancouver RCMP’s non-emergency number. She also took it upon herself to tape over part of it to obscure its overtly racist message. But when she came back the next day, she saw the tape had been removed and someone had added to the screed. This time, Danelesko used a black marker to blot out the word and covered it over again with stronger tape.

“I think it's important that folks on the North Shore know that racism can happen anywhere. It's all around us and, no matter who you are, we all need to be allies and supporting our neighbours, and community members who identify as Asian,” she said. “We're seeing a huge increase in violence against Asian folks right now as a result of really harmful rhetoric that's increased because of the pandemic. If you see something, intervene. There are many, many resources that can teach you how to be an ally.”

Specifically, Danelesko recommended Elimin8Hate, which she volunteers for, and Project 1907.

Ma said tackling racism wasn’t what prompted her to enter politics, but she’s been struck by how frequently she has been called on to speak to it.

“Sadly, it's an issue that has found its way to me time and time again via anti-Asian racism, anti-Indigenous racism, or other forms of discrimination for reasons that no one can control about themselves,” she said.

The rising incidences of hate are among the reasons Ma said her government appointed MLA Rachna Singh as the province’s first parliamentary secretary for anti-racism. Singh will soon be announcing grants for organizations that lead anti-racism initiatives.

The North Vancouver RCMP is investigating the graffiti.

“We strongly condemn all forms and expressions of hate, racism and racial discrimination,” said Sgt. Peter DeVries, North Vancouver RCMP spokesman. “We take these incidents very seriously and ask that anyone who witnesses an act of hate speech or racist graffiti, or who has any information, to contact us and report it immediately.”

The North Shore Multicultural Society, which offers support to members of the community who have been impacted by acts of racism, is also responding.

“NSMS strongly condemns all acts of hate which impact and threaten our community safety and infringe on human rights,” a statement from the group read.

The Multicultural Society recently conducted a survey, which found 19 per cent of North Shore immigrants from countries in East Asia have experienced an attack, harassment, or discrimination based on race. Beyond that, Canada has an established history of racism that must be addressed, the group says.

“Everyone in our community has a role to play to stop anti-Asian racism,” the statement read. “Addressing anti-Asian racism also means working to dismantle structural racism and the disproportionate exclusion of Indigenous, Black, and other racialized communities. We need to stand together and take action against racism in all its forms and assert that acts of hate are not acceptable in our community.”

City of North Vancouver Mayor Linda Buchanan has added her voice to those denouncing the graffiti.

We all want to feel welcomed and included in our community, but the rise in anti-Asian hate in our community and beyond is proof there is more to do to combat racism. Hate has no place in our community, and yet we are not a community free-of or immune-from hate. I am deeply upset by the reports of anti-Asian graffiti in the Lower Lonsdale area. The City of North Vancouver is a proud multicultural community and hateful rhetoric will not be tolerated. My thoughts are with everyone in the community who will be impacted on a personal level by this act of racism," she said in a statement.