The Skeetchestn First Nation, which lies about 60 km west of Kamloops, was put on an evacuation order Friday night as the Sparks Lake fire exploded along a nearby ridgeline.

A B.C. First Nation driven from their reserve by wildfire says the BC Wildfire Service (BCWS) failed to respond to requests for help as an out-of-control inferno bore down on their community.

Every morning last week Skeetchestn Indian Band Chief Darrel Draney jumped on a pre-operations call to assess the advance of the Sparks Lake wildfire. Also on the call were leaders from other First Nations communities, Emergency Management BC, the BC Wildfire Service and the City of Kamloops, among others.

For two days, Draney says he requested follow-up calls to get help protecting his community. No calls were returned, he says.

By Wednesday, June 30 — two days after the fire was discovered — 56 firefighters, 10 helicopters and two pieces of heavy machinery were battling the blaze northwest of Kamloops. But for the First Nation community on the Thompson River, nothing was in sight, says Draney.

“We had no response to anything,” Draney tells Glacier Media, adding the band wasn't getting resources along its borders. “No red shirts anywhere. No aircraft. Not even a visit.”

By noon Thursday, the BC Wildfire Service cordoned off a massive area around the fire for anyone not living or working in the area.

Cliff Chapman, director of provincial operations for the BC Wildfire Service, says evacuation orders and alerts were in place for the ranches and the residents north of the reserve.

“When those are threatened, our resources are going to be sent into those areas and prevent damage to the structures and the homes,” he says.

Desperate to be heard, that's when Draney says he called up Rick Manwaring, the deputy minister of Forests, Lands, Natural Resources and Rural Development. Hours later, Draney says firefighters started trickling on the scene and he says he got assurances the Sparks Lake fire would be treated as the number one priority fire in the province.

“At that point, we were two days behind the fire,” says Draney.

Chapman acknowledged the Skeetchestn chief may have called the deputy minister, but denied the BC Wildfire Service had received political pressure to send in more resources to the reserve.

“There was no pressure from above to send resources into Skeetchestn. It was just... the dynamics of the fire,” says Chapman, noting the wind started blowing from the north on Friday.

“I’m not defending the delay. All I’m saying [is] it was tactical decision-making, not pressure from any direction.”

THE MOUNTAIN BLEW UP'

Friday night, the Sparks Lake wildfire slammed into the frontier of the Skeetchestn reserve. Former Skeetchestn Chief Ron Ignace says he was sitting on his front lawn watching the nearby ridgeline when the sky turned orange.

“All of a sudden, the mountain blew up,” he says.

That’s when the evacuation alert turned into an order, at around 9 p.m. But before the RCMP came knocking on everyone’s doors, Ignace says there was a “mad rush” to leave.

“Everybody woke up and blew out of the reserve,” he says.

With hotel rooms in Kamloops overwhelmed due to evacuations from Lytton — a village burned to the ground last week in a separate fire — the community had to look further afield. Leadership says it chartered a coach to bus some members to an evacuation centre set up at a Salvation Army Church in Kelowna.

But not everyone left, says Ignace.

Again on Saturday, Draney says he called deputy minister Manwaring to receive additional resources to track the Durand Lake wildfire as it burned to the south. 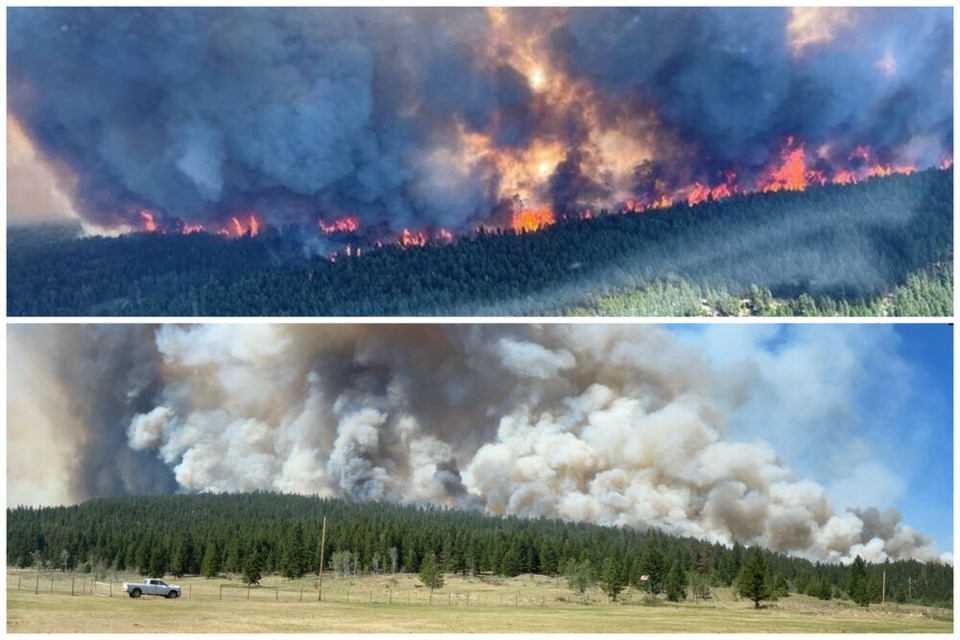 The Sparks Lake wildfire had burned over 39,000 hectares as of July 5, roughly three and a half times the area of the City of Vancouver. Photo by: BC Wildfire Service

SKEETCHESTN 'THE BRAINS OF THIS FIRE'

Over the weekend, winds picked up at night intensifying the blaze, says a spokesperson for the BC Wildfire Service.

“A great wall of fire” hung over the community, burning homes north of the reserve, says Ignace.

Of the 250 band members on reserve, Draney says 75 stayed behind as fire watchers, mappers, community organizers and heavy equipment operators. Others set up irrigation systems to water down the 86 properties and 94 structures on reserve.

Once on the fire line, First Nations members and BCWS firefighters quickly started working together, with local experts leading tactical back burns to halt the fire's advance.

As Draney put it: “Skeetchestn is the brains of this fire. The ministry is the brawn.”

Chapman says partnering with First Nations on firefighting is a priority for the BC Wildfire Service, and that since last week, the relationship has improved both on the ground and at the leadership level.

“Where I believe there was a small gap, a miss, was that leadership level,” he says. “The delay for us to connect with chief and council is something we’d like to see improve and we’re working to improve on other fires.” 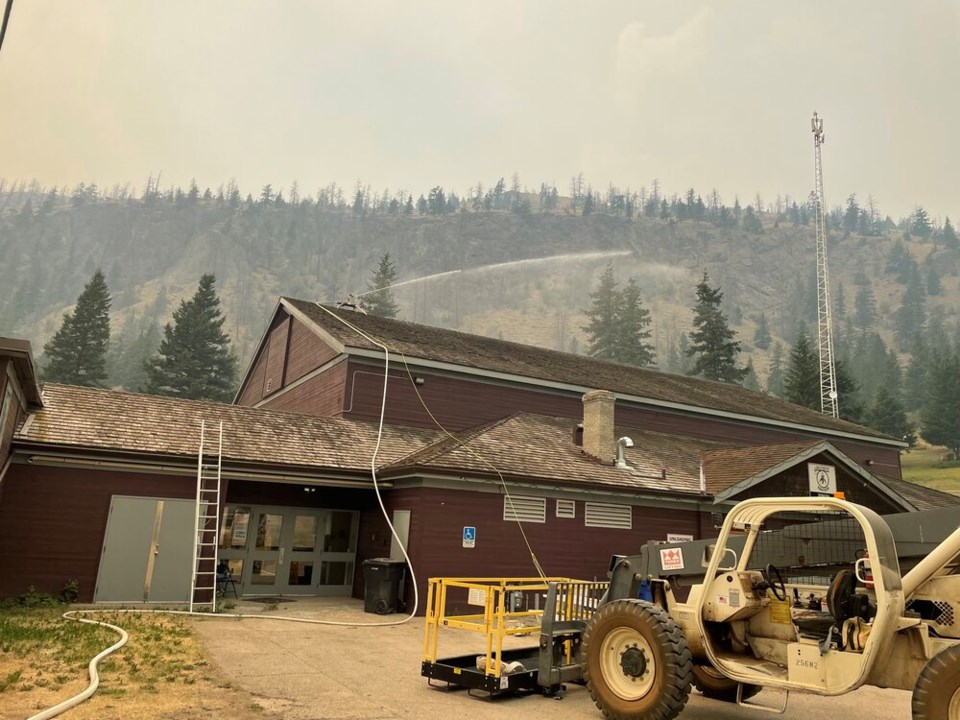 A building on the Skeetchestn reserve is watered down as firefighters and community members work together to battle the Sparks Lake wildfire northwest of Kamloops, B.C. Photo by: BC Wildfire Service

By Monday morning, the BC Wildfire Service said the Sparks Lake blaze had burned over 39,000 hectares, though high cloud and cooler temperatures had slowed its advance.

Marg Drysdale, a fire information officer with the service, says the 144 firefighters on the scene have been “very very lucky.” By Wednesday, firefighters were working with 15 helicopters, 42 pieces of heavy equipment and Skeetchestn band members on the ground to build fire breaks — overturned soil, scorched earth of wet lines — on the east side of the reserve.

“Our crews are working 24 hours a day,” says Drysdale, noting there is an “ongoing risk.”

“These are conditions that we would normally see three weeks from now. This is very unusual for this time of year.”

THE BURNING EDGE OF CLIMATE CHANGE

The Sparks Lake fire is one of 14 “wildfires of note” across B.C., meaning they are either highly visible or pose a potential threat to public safety.

Wildfires have exploded across the province in the last week following a record-breaking heat wave that is thought to have taken the lives of hundreds of people.

Days later, the tinder-dry conditions in the B.C. village allowed fire to sweep through its downtown, killing at least two people.

Indigenous communities have long suffered a disproportionate fallout from wildfires in Canada: between 1980 and 2020, 49.1 per cent of wildfire evacuations occurred in communities where over half the population was Indigenous, according to the Canadian Wildland Fire Evacuation Database.

Climate change is only expected to make those inequities worse.

Draney points to that kind of environmental injustice when he says it's time for Indigenous people to start calling the shots on protecting their own communities.

“This should not be an isolated incident,” he says. “This should be a precedent that’s set. Traditional knowledge and western knowledge should work together. Walking on two legs is the way to go.”