B.C. nightclubs, casinos and concert halls have faced 15 months of sitting either partially closed or outright shuttered amid the pandemic. And frequently shifting restrictions have plagued efforts from gyms and restaurants to maintain steady business during the health crisis.

But a path forward is emerging for businesses across the West Coast, with the province on Tuesday unveiling a reopening plan that will lean on reaching specific thresholds rather than specific dates.

B.C. is presently in the first step of its plan, where 60% of the adult population has received at least one vaccine dose and COVID-19 cases are declining. Indoor dining at restaurants with up to six people is currently permitted as of Tuesday with the lifting of circuit-breaker restrictions introduced in March amid surging case numbers.

“We'll be monitoring the data and we’ll be giving dates. But this will be based on the data, not the dates, and we'll be learning as we go,” B.C. provincial health officer Dr. Bonnie Henry said.

The province’s four-step plan will see as many as 50 people permitted to gather for seated indoor events at banquet halls, cinemas and live theatres as early as June 15. That date is dependent on the province reaching at least 65% of adults getting their first COVID-19 vaccine dose while the number of cases and hospitalizations continue to decline.

Restaurants will be able to extend liquor service from the present 10 p.m. cut-off time to midnight when step No. 2 potentially arrives in mid-June.

Meanwhile, provincial officials will be engaging in a consultation process to prepare for larger indoor and outdoor gatherings with safety protocols.

Intra-provincial tourism would also presumably increase during this period with restrictions on recreational travel being lifted (British Columbians are currently only permitted to travel for recreational purposes within specific zones in which they live).

Henry encouraged British Columbians to take a weekend to explore the province in June, adding she expects Canadians from other provinces will begin visiting the West Coast in earnest again in July.

But Premier John Horgan said international travel, which would bring in throngs of foreign tourists, will have to wait for federal direction.

Reaching step No. 3 will depend on at least 70% of the adult population receiving at least one vaccine dose, while COVID-19 case counts remain low and hospitalizations continue to decline.

The earliest date that could arrive, July 1, would usher in no group limits for indoor or outdoor dining as well as the reopening of casinos, nightclubs and bingo halls — albeit at limited capacity — after those businesses were sent into stasis over the past year.

Even the directional arrows lining the aisles of grocery stores and retail shops will be lifted as the province implements new safety plans that are currently under development with sector associations.

Offices will also be given the go-ahead to hold larger seminars and meetings within their walls during step No. 3, while summer fairs and street festivals will be able to resume.

Gyms will also be able to hold indoor fitness classes at increased capacity by this period.

Step No. 4 could come as early as September 7 but it will depend on more than 70% of the adult population receiving at least one dose, while COVID-19 case numbers and hospitalizations remain low.

By then, large concerts will be permitted for the first time since the onset of the pandemic, while teams like the Vancouver Canucks could also see the opportunity to welcome in more fans into the stands when the NHL season resumes in the fall.

Horgan said he and Henry have been talking to the Vancouver Whitecaps and BC Lions about bringing fans back into BC Place this summer.

But the premier did not comment on the likelihood the stadium would be filled with spectators during what would be step No. 3 in the reopening plan.

“We’re confident that we’re a positive place to prep [a reopening] in a measured way based on data,” Horgan said, in response to concerns the province might be opening up once again too quickly.

“If we find that there are parties of 50 or more that are taking place before we get to the next step, you can expect law enforcement will be there to give you a bit of a presence to start on your second step.”

Jeff Guignard, executive director of the Alliance of Beverage Licensees BC (ABLE BC), said the reopening plan delivers a “massive sigh of relief” for liquor-serving establishments across the province.

“What’s been frustrating about this is we've never known what we're working towards,” said Guignard, whose industry group advocates on behalf of bars, clubs, private liquor stores and cannabis retailers.

“It doesn't really matter what the timing is, what the protocols are, [as long as] we know what they are. Then we can plan and we can become partners in this.”
He said the extension of liquor-serving hours beyond 10 p.m. is significant for the industry, owing to the fact 30-60% of liquor sales come after that hour, depending on the establishment.

“Little things like that it can be a massive difference for industry,” Guignard said, adding the long-ailing nightclub sector likely wouldn’t be doing much business anyway if alcohol sales ceased at 10 p.m. 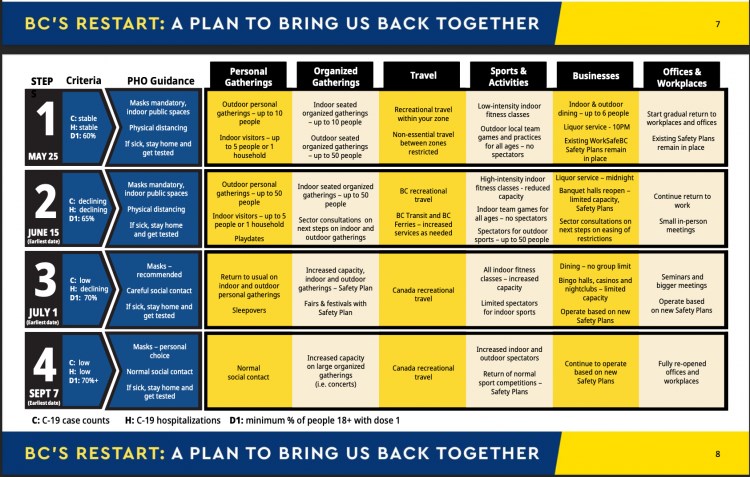 While moving up from step No. 1 to step No. 4 will depend on the province hitting minimal immunization thresholds, British Columbians will not be required to show proof of vaccination when entering businesses that are reopening at capacities not seen since prior to the pandemic.

“There is no way that we will recommend inequities be increased by use of things like vaccine passports for services like public access here in British Columbia,” Henry said.

“I do think it will be necessary to support international travel.”

Surrey Board of Trade CEO Anita Huberman said her members are “keenly interested” in what’s ahead for border and international travel restrictions.

“The key moving forward is to have consistent and timely communication to businesses and organizations so that they can update their health and safety plans and prepare for the staff and supplies that they need. Every step should have an announcement with significant lead time,” she said in a statement.

The Greater Vancouver Board of Trade said it welcomed the province’s reopening plan.

“Now that we understand the targets, metrics and the path forward, we can begin to plan in earnest for a strong economic recovery in both B.C. and the country more broadly. We are all eager to gather with friends and family, and for businesses to rebuild after an extremely challenging 15 months,” CEO Bridgitte Anderson said in a statement.

“[The Cinematheque’] looking forward to re-opening the cinema at a reduced capacity when the PHO [provincial health officer] confirms the transition to Phase 2 of B.C.'s Restart Plan. We cannot wait to welcome audiences safely back to the theatre,” she said in an email to BIV.