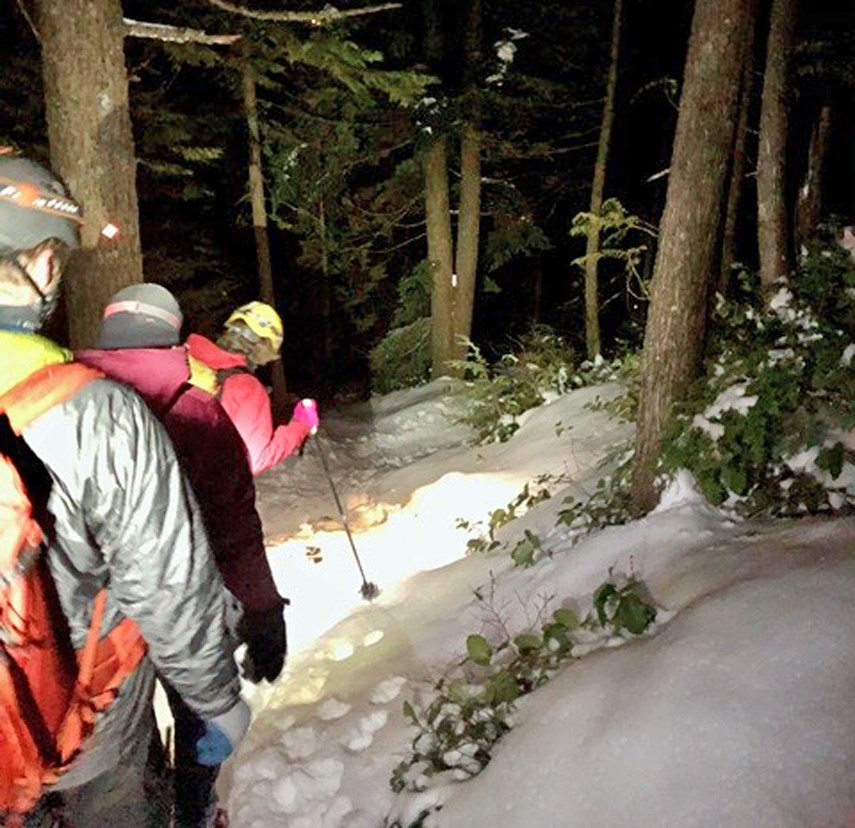 North Shore Rescue members navigate the hard ice crust on the Grouse Grind during a rescue early Saturday.@NorthShoreRescue via Facebook
If you happen to find yourself lost or in need of assistance while exploring the backcountry, it at least helps to have a general idea of where you are in the first place.

It was a late night for North Shore Rescue after receiving a callout – that likely should have arrived sooner – at 12:45 a.m. early Saturday for a report that a hiker was lost somewhere along the Grouse Grind.

The hiker, a Surrey man in his 30s, had started his ascent up the Grind at 5 p.m. Friday.

When he called 911 to report he was lost hours later however, the call was initially taken by Squamish RCMP and Squamish Search and Rescue – because the man incorrectly stated he was lost near the Sea to Sky Gondola instead of the Grind near the Grouse gondola.

“It took quite a while for the call to get flipped over to North Shore Rescue,” said Mike Danks, NSR team leader.

The man, described as an inexperienced hiker who started his climb in jeans and had no light source besides his cellphone, got lost and wandered off the Grind path before NSR members found him and led him back to the base of Grouse by 4:30 a.m. this morning.

The Grind is currently closed by Metro Vancouver due to wintery conditions. NSR members had to wear mountaineering crampons and use ice axes as they navigated the steep terrain and hard ice crust on the Grind during the rescue.

“He had a couple little falls and just got stuck. He was essentially 30 metres off the trail, but with no light he didn’t know where he is. He was halfway up the Grind underneath the gondola,” said Danks.

When starting a hike or exploring the outdoors it’s important to have some familiarity with the area where you’re hiking, especially if the person is attempting a solo hike or there’s not much daylight left, said Danks.

“If they’re going to call for help, it’s really helpful to be able to say, ‘I’m on Grouse Mountain.’ Just give a general area,” he said.

NSR was also called out to Coliseum Mountain Friday afternoon after a woman accidently got turned around while hiking Norvan Falls and ended up on the challenging – and currently closed – Coliseum hike. She called 911 at 2:50 p.m. and NSR was dispatched shortly after.

“She got into unfamiliar terrain and she started to get worried because it was getting dark soon,” said Danks.

NSR flew its Talon helicopter to the Norvan landing pad, made contact with the woman, and escorted her off the trail just before nightfall, said Danks.