To restore Sidney Island’s ecology, a push to kill hundreds of fallow deer

Parks Canada say the eradication of fallow deer is essential to restore the natural ecology on the small island
May 16, 2021 3:34 PM By: Darron Kloster / Times Colonist 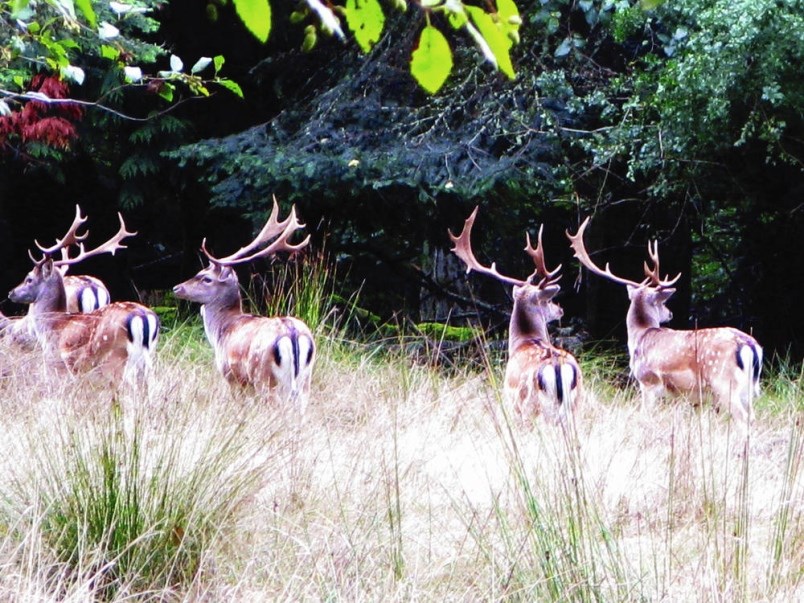 Fallow deer were introduced on neighbouring James Island in 1902 by the owner at the time as prey for hunting parties, and moved to Sidney Island in the early 1960s, when ponds were dug and the first standing fresh water became available to sustain them.Parks Canada

The days may be numbered for the European fallow deer that have grazed the landscape bare and destroyed traditional ecosystems on Sidney Island for more than a half-century.

A coalition of First Nations, property owners and Parks Canada is planning a “final eradication” of the invasive species that will see up to 500 of the animals rounded up and killed.

The fallow deer were introduced on neighbouring James Island in 1902 by the owner at the time as prey for hunting parties. The spotted deer with impressive antlers invaded Sidney Island in the early 1960s, when ponds were dug and the first standing fresh water became available to sustain them.

Their numbers grew to the thousands in the 1980s, causing Sidney Island’s Garry oak meadows, Douglas firs and dozens of native plant species to suffer or disappear.

Although controlled hunting and periodic culls over the years have reduced their numbers to an estimated 400 to 500, serious steps are now in the works for a final roundup to destroy all remaining stock. It would likely happen in the fall of 2022, after details of the method of killing have been determined and a consensus with stakeholders reached.

Parks Canada, which controls about 440 hectares on the north end of the island — including Sidney Spit — as part of Gulf Islands National Park Reserve, is leading the initiative, along with the First Nations of the W̱SÁNEĆ Leadership Council, Islands Trust Conservancy and the 50-plus residents of the island, 1,500 hectares of which is owned in 111 bare-land strata lots.

Sidney Island is about 2,400 hectares and is unceded territory of the Coast Salish First Nations.

Any decision to move ahead on a complete cull will need a majority vote from the strata owners, said Triana Newton, spokeswoman for the Sallas Forest Strata Corp., made up of island property owners.

It isn’t clear when that will happen, she said.

“There’s a range of voices,” said Newton. “There are those deeply rooted in ecological prevention, others in food security [that hunts provide.]

“I think we all just want as much information as we can get so that when it comes time for a vote, owners can make an informed decision.”

Parks Canada said the eradication of fallow deer is essential to restore the natural ecology on Sidney Island and aid native plant recovery that will support insects, butterflies, songbirds, rodents and black-tailed deer. Sidney Island is considered one of the least ecologically diverse islands in the Gulf Islands because of the deer, said the federal agency.

Eric Pelkey, hereditary chief of the Tsawout Nation and representative of the W̱SÁNEĆ Leadership Council, said that First Nations want to see the island return to the natural state it was in when his ancestors had an active village and burial grounds there, edible and medicinal plants such as camas and ferns were plentiful and native black-tailed deer caused far less damage.

“These fallow deer eat anything and everything and they multiply like rabbits,” Pelkey said. “Everyone with an interest is now at the table. Hopefully we can get to the point now where we can implement the plan.”

If the idea is approved, Parks Canada would find an internationally accredited firm to carry out the mass kill in the most humane manner, though all the parties admit it would still be a gruesome task.

As Pelkey understands it, the process would involve netting and penning the deer to be killed quickly. He said hunting dogs and possibly helicopters would be used to round up or hunt remnants of herds.

“When we first discussed this with our elders, they said eradication was never part of our culture or hunting practices,” said Pelkey. “But we made our case that fallow deer are not native and they have destroyed the island so nothing can survive there.”

Sara Dubois, chief scientific officer for the BCSPCA, said the organization recognizes the project as an ecological measure to restore native plant and animal species. The BCSPCA will neither support nor oppose the proposal until there’s a full review of the cull plan, she said.

Dubois said one mass kill could be preferable to continued hunting that would bring the deaths of many more animals over the ensuing years.

She confirmed netting, dogs and night-scope hunting could be used in a roundup. If the cull is approved, Parks Canada would issue requests for contracts and work with a professional company on the methods and final outcomes, such as meat distribution.

He said Parks Canada has a camera system on Saturna Island to keep an eye on fallow deer swimming from Mayne Island, where the population is exploding. “We can rapidly detect and respond there,” he said.

The deer were introduced to Mayne Island after a small number escaped from a farm in the early 1990s. After years of breeding, the deer population has been estimated at 500 to 1,000 on an island that is home to just over 1,000 people.