Why does COVID-19 kill so many seniors in long-term care?

A massive study seeks to answer that question. Nearly two-thirds of all COVID-19 deaths in B.C. have occurred in long-term care homes.
Feb 11, 2021 2:38 PM By: Stefan Labbé 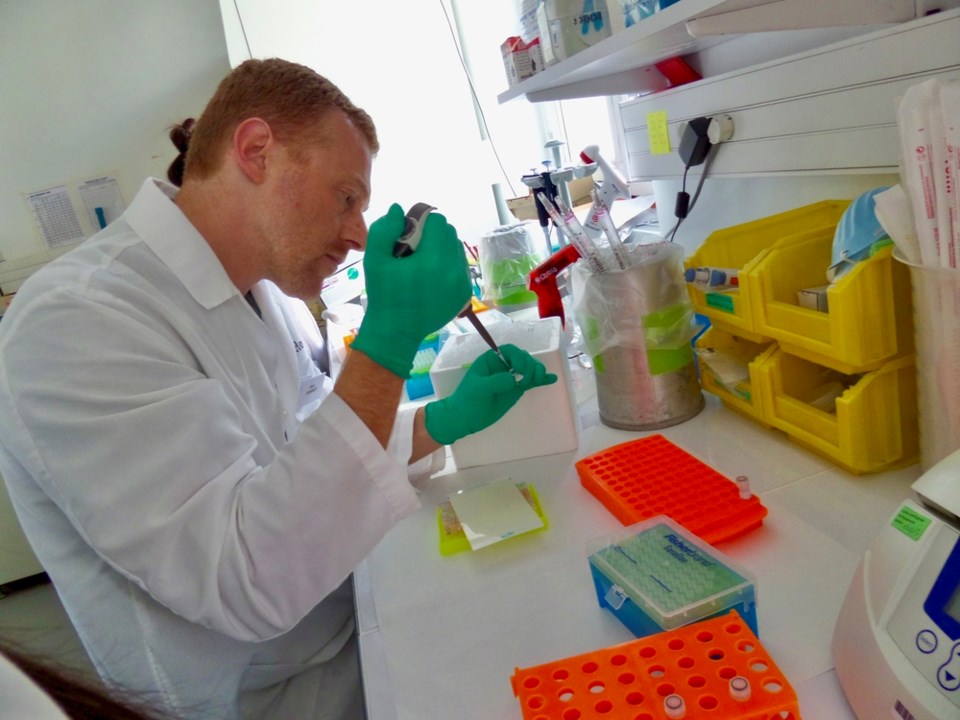 Dr. Marc Romney working in a lab. Having long chased the next emerging pathogen, Romney is now leading a sweeping study to determine why COVID-19 has killed so many in long-term care and how long vaccines will protect them into the future.Submitted

COVID-19 has killed more people in long-term care homes than anywhere else in British Columbia. Now, a sweeping new study is setting out to answer the question: Why them?

The study, which involves over a dozen of B.C.’s leading virologists, immunologists and lab researchers, hinges its investigation on how elderly immune systems respond to a coronavirus infection. From there, researchers will look at elderly immune responses to vaccines — both in those who never tested positive for the virus and those who recovered from a previous infection.

“We still don't know why COVID is having such a devastating impact on long-term care, especially the residents,” said lead researcher Dr. Marc Romney, a clinical associate professor in UBC’s faculty of medicine and the medical leader for medical microbiology and virology at St. Paul’s Hospital.

A POST-MORTEM IN A DEADLY OUTBREAK

Romney has spent his career tracking emerging pathogens, from SARS in California in the early 2000s to the global response to Ebola and outbreaks of C. difficile in B.C. hospitals — a bacteria causing a form of infectious diarrhea, especially deadly among seniors.

“Most of my career has been about emerging pathogens, viruses and bacteria — diagnosing them, controlling them,” he said. “I'm in it for the long game.”

Then came reports of a novel coronavirus in Wuhan, and like so many researchers, his work pivoted to the soon-to-be COVID-19 pandemic. As the current head of St. Paul’s diagnostic laboratories, Romney was part of a team that went into the Holy Family Hospital long-term care facility in Vancouver after an outbreak erupted there in June.

Over the next couple of months, it would become one of the hardest hit facilities in B.C., suffering 21 deaths and a total of 88 confirmed COVID-19 cases. (Later outbreaks in other areas of the facility would add to that toll, including five cases before the end of 2020 and another five in an ongoing outbreak at the facility’s second-floor rehab unit).

“I’d helped to manage outbreaks of influenza and norovirus. But this was completely different,” said Romney. “That really opened my eyes to how people living in long-term care are suffering because of COVID.”

Early on in the outbreak, Romney said he asked himself why the virus was transmitting so quickly and why residents were suffering from such severe complications due to COVID-19.

“People have different hypotheses, but there aren't a huge amount of data explaining that particular phenomenon,” he said.

That’s when Romney and his team started drawing blood samples, not just from sick and healthy residents of Holy Family Hospital but from the facility’s staff as well. When the Pfizer-BioNTech vaccine was given the green light in December, they rushed to draw a second set of pre-vaccinated blood samples. A third round of blood samples is being collected from these patients after they have received the vaccine.

“Our study is unique,” he said. “We were one of the few places in Canada to get that done before the vaccine arrived in December.”

Those samples will form the building blocks of their investigation, though the group is looking to enrol another two to three hundred long-term care workers in cohorts spanning several age groups. In that way, the researchers can understand how immune responses (and viral behaviour) change with age.

“Their ages range from 20 to 60 and even above, so we will be including people of different age groups and we're going to be looking at vaccine effectiveness in those individuals as well,” said Romney.

A PORTRAIT OF RISK

Not all the work will be done in the lab. Health officials, medical staff and management in at least one of the deadliest outbreaks in B.C. have reported that wandering dementia patients present a serious challenge to containing the transmission of COVID-19 in long-term care.

But whether these wandering residents have a higher risk of infection is an open question, and one of many Romney and his team are looking to measure.

By combining clinical data, epidemiological data and social data within the facility, they hope to paint both a portrait of risk among some of the province’s most vulnerable and shed light on why despite making up only 0.0005% of the population, nearly two-thirds of all COVID-19 deaths in B.C. — including at least 48 deaths in the Tri-Cities — occurred in long-term care homes.

Throughout the two- to three-year study, Romney said the group will be feeding their findings back to public health doctors, epidemiologists and practicing clinicians so they can quickly put what they’ve discovered into action.

HOW LONG WILL THE VACCINE LAST?

Seniors in long-term care were some of the first to get vaccinated in B.C. But just how effective those doses are in stimulating an immune response could mean life or death in any future outbreaks.

Romney said some members of his team will deploy tandem mass spectrometry to reveal the identity of antibody proteins in patients. By shattering the molecular building blocks of a blood sample into readable fragments, the technique is often used in hospitals to detect lifelong illness and disability in newborns.

The team will compare the antibodies in vaccinated and unvaccinated blood samples, with those who have recovered from a natural infection. That way, they hope to reveal whether natural or vaccine immunity is more durable and what parts of the immune system put up the biggest fight.

“Because right now,” said Romney, “we don't know: is it months, is it years?”

WHAT ABOUT THE VARIANTS?

Dozens of ‘variants of concern’ have already been identified across B.C., from the highly contagious U.K. variant, B.1.1.7, to the South African variant, B.1.351, which has shown resistance to several vaccines.

As part of the “massive” study, Romney said researchers are leaving the door open to probe how the new variants impact seniors in long-term care.

And while, to date, he said there have been no cases of a ‘variant of concern’ in a B.C. long-term care facility, reports from colleagues in the U.K. and Ontario show its dangerous potential.

“They have informed me that when the variant does arrive in a long-term care facility, it spreads like wildfire,” added Romney, pointing to an outbreak in a Barrie, Ont., facility.

“So we just want to be prepared for this and understand why is that the case? Why is it so much more transmissible?”

Positive coronavirus tests are already being screened at St. Paul’s Hospital using whole-genome sequencing, and if cases pop up in a B.C. long-term care facility, Romney said they will find them.

The researchers also have the ability to simulate mutated variant spike proteins in the lab, and by introducing the mutated variant to both vaccinated and unvaccinated elderly blood samples, they hope to understand just how much of a risk they present to long-term care residents.

“We're hoping it doesn't happen, of course, because we saw what happened in Barrie.”

With over $2 million from Canada’s COVID-19 Immunity Task Force, the researchers from UBC, SFU, Providence Health Care and the Centre for Excellence for HIV and AIDS at St. Paul's are part of a massive effort to understand the extent of natural immunity in this country and how vaccines will protect Canadians.

In a second stage of the study, Alberta-based researchers are looking to monitor sewage wastewater to develop an early warning system to detect and monitor outbreaks in long-term care facilities.

And in a separate study funded by the task force, another group of B.C. researchers is looking to enrol over 5,000 paramedics to understand how their workplace makes them more vulnerable, and how better to protect them.

The compressed timelines and scale of such research have flipped the once plodding pace of science. But putting their results into action and finding a way out of this pandemic can obscure wider applications, and Romney said he always has his eye on the next emerging pathogen.

“What we've learned is this particular population is prone to viral outbreaks, be it influenza, norovirus or SARS-CoV-2. So this could be used as a model for other viral infections in long-term care.”

"And," he added, "from other viruses that have this pandemic potential."