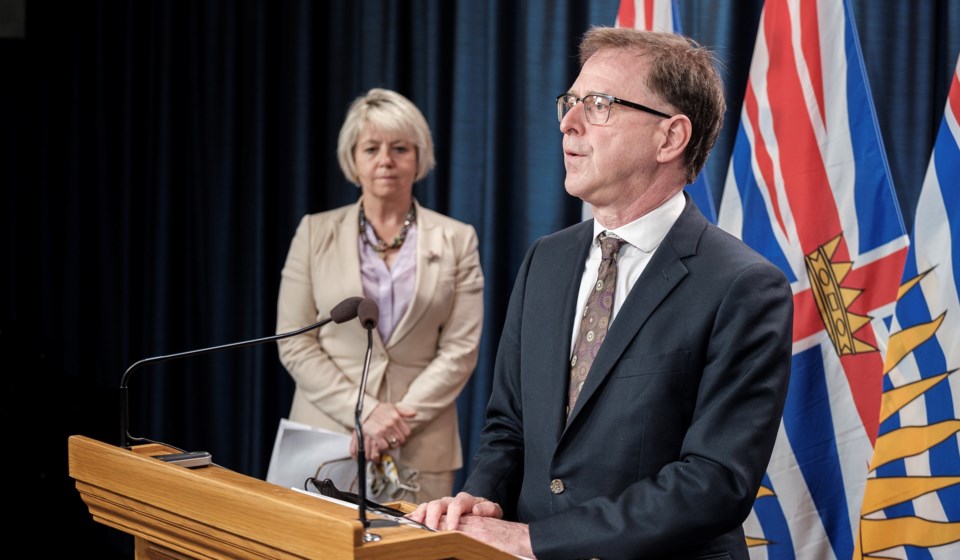 “There's evidence emerging that you get a stronger, and longer lasting, protection if the interval is greater than eight weeks,” provincial health officer Bonnie Henry said yesterday (June 10.)

Some pharmacies have been restocked with AstraZeneca supplies, and BIV has learned that some of them are allowing recipients to get second-dose shots even if they have not yet gone a full eight weeks after their first doses.

The vaccinations translate into 75.1% of B.C. adults having had at least one vaccine shot, while 73.1% of all those 12 years and older have had at least one shot, Henry and Health Minister Adrian Dix said in a joint statement.

New infections continue, albeit at a lower rate than in recent weeks.

Health officials detected another 180 infections overnight, for a total of 146,176 since the first case was discovered in January, 2020. Of those, the province has deemed that more than 97.5%, or 142,526 people, have recovered because they have gone at least 10 days following initial symptoms and are not thought to still be infectious.

Serious bouts of COVID-19 are at a seven-month low.

The 162 people now fighting for their lives in B.C. hospitals is a number lower than at any time since November 12, when there were 155 such people. Of the 162 people hospitalized, 45 have bouts of the disease serious enough to be in intensive care units (ICU). The last time there were so few people in ICUs was also on November 12, when 44 individuals were in those critical care spaces.

One additional death from COVID-19 happened overnight, according to Henry and Dix. That raises the province's death toll from the disease to 1,730.

The number of those actively fighting infections has dropped for the 35th consecutive provincial data update, to 1,880 – the lowest number since October 21.

One new outbreak has been detected at Rotary Manor Dawson Creek in Northern Health.

That means that there are now six active outbreaks at seniors' homes. They are:
• Cherington Place in Surrey;
• Glenwood Seniors' Community in Agassiz;
• Heritage Manor in Fort St. John;
• Richmond Lions Manor-Bridgeport in Richmond;
• Rotary Manor in Dawson Creek; and
• Spring Valley Care Centre in Kelowna.