From a list of 11 possible spring break activities, the survey finds that a firm majority (63%) of Canadians are at least considering doing at least some of the activities on the list.

With spring break only a few weeks away, numerous Canadians are making plans on how to spend the time off.

That said, a recent survey finds that not all Canadians are following coronavirus (COVID-19) rules. Further, many of them plan to enjoy some activities during spring break that run counter to the restrictions and guidelines set by their province.

Insights West conducted its survey from Feb. 3 - 7 among a sample of 1,614 English-speaking Canadians. It determined that B.C. residents "appear to be the worst in the country when it comes to the proportion of residents who are not following all of the rules all of the time."

Across Canada, the survey finds that only about one-half (48%) of Canadians claim to be following COVID-19 restrictions all of the time, and the remainder are breaking the rules to some degree or another.

In B.C., report authors note that it was "surprising" to find that B.C. residents are least likely to say they follow the rules. Only 34 per cent of them claim to follow all of the rules all of the time, which is 14 points to 22 points lower than in other regions. "Instead, British Columbians have more people (48% compared to between 24% and 36% in other regions) following the restrictions only ‘nearly all the time’." 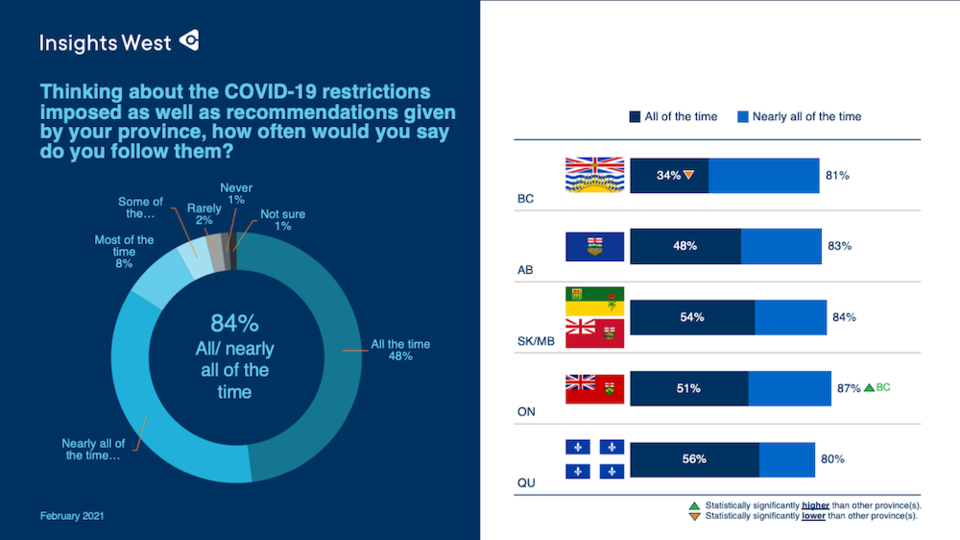 “Early indications are that a significant number of Canadians are planning to bend the rules during spring break and beliefs around it being OK to bend those rules are likely the reason for the slow decline in the COVID-19 numbers," says Steve Mossop, President of Insights West.

“What is interesting is the wide number of reasons Canadians give in justifying their rule-breaking behaviour. When it comes down to it, less than half of us are serious about following all of the rules, and that is problematic if we want to see a faster decline of the numbers”

When it comes to specific spring break activities, Insights West says "there’s a wide range of actions that many Canadians are contemplating" that would constitute bending or breaking the current COVID-19 rules in place.

From a list of 11 possible spring break activities, the survey finds that a firm majority (63%) of Canadians are at least considering doing at least some of the activities on the list. In contrast, only 37 per cent say they will ‘definitely not’ or ‘probably not’ do any of them.

Topping the list is the finding that about one-half of Canadians are considering having an indoor visit with family members (50% ‘definitely will’, ‘probably will’ or ‘might or might not’) or friends (49%) outside of their immediate household during the spring break period.

The survey also finds that B.C. residents are the least likely among any in Canada to take a flight of any kind, particularly compared to Ontarians and English Quebecers. 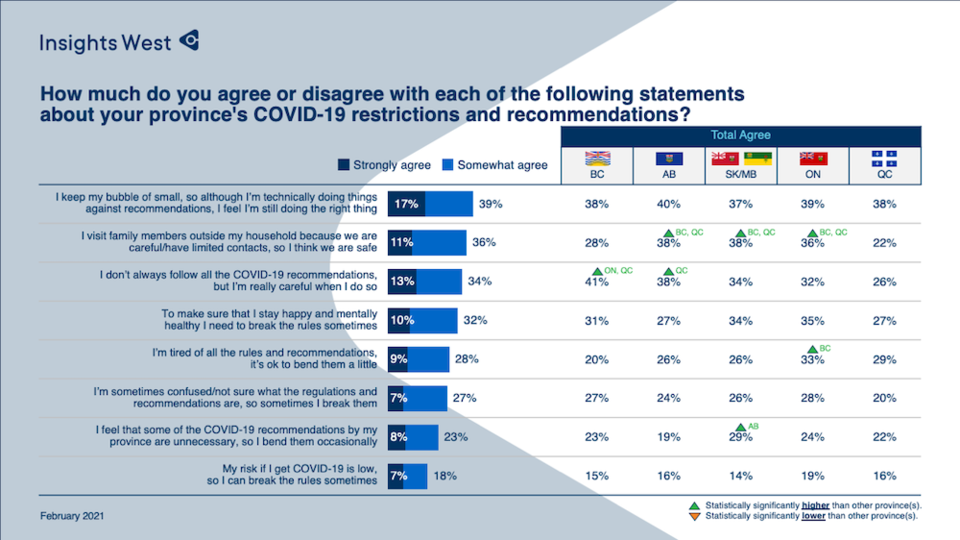 Insights West compiled a list of eight possible reasons that some Canadians are not following the rules and regulations all of the time and found ranging levels of agreement that it says help us "understand some of the underlying motivators for breaking the rules."

"The largest proportion (39%) they feel they can break the rules occasionally because they keep their bubble small and still feel like they are doing the right thing—a sentiment that is pretty consistent across the country," report authors explain. "A similarly high percentage feel that they can occasionally visit members outside their household because they keep their bubble small (36%). Some that don’t always follow all of the rules indicate they are careful when they break them (34%)."

Pandemic fatigue is also a factor in some of the rule-breaking and bending that is occurring across the country. One-third (32%) believe that in order to stay happy and mentally healthy, they are breaking the rules occasionally. "Taking it a step further, 28% say they are tired of all the rules and recommendations, so they feel it is OK to bend them."

Government releases list of approved hotels for travellers to quarantine in Canada
Feb 19, 2021 11:56 AM