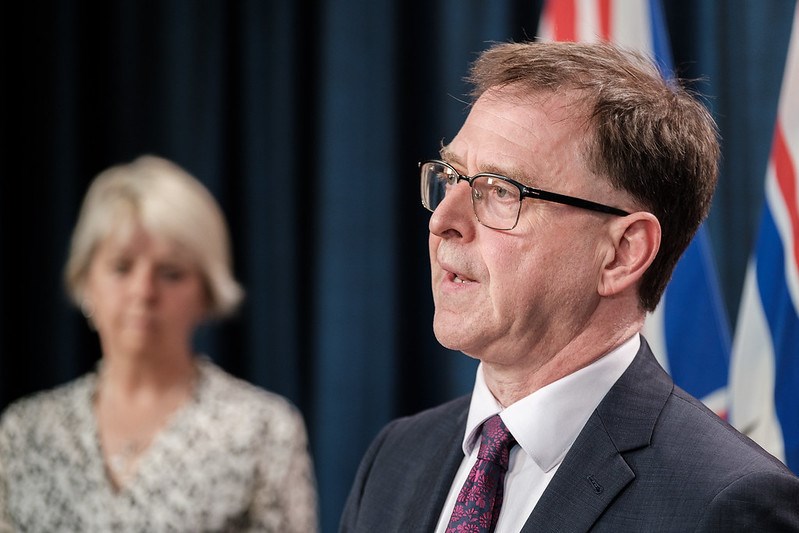 As new COVID-19 infections continue to rack up in B.C., and as the province's death toll from the disease rises, health officials are promising that the province's vaccination campaign is slated to ramp up.

Originally, provincial health officer Bonnie Henry said that there were 874 new cases of COVID-19 identified in the province in the past day. That number was later revised downward, to 853.

There are 503 COVID-19 patients in B.C. hospitals, with a record 178 having illnesses severe enough to be in intensive care units.

"The vast majority of people in hospital right now are not related to COVID-19," Health Minister Adrian Dix said. "In fact, the numbers in acute care province-wide are fairly stable."

One person in B.C. died from the disease in the past day, in the Interior region. That raises the province's death toll from COVID-19 to 1,577.

The number of those known to be actively fighting infections – 7,996 – has been declining, and is lower than it has been at any time since April 1. The vast majority of these people are self-isolating at home. Health officials are closely monitoring 11,628 people for symptoms because they have been exposed to the virus. That number is also the lowest that it has been since April 1.

No new data was provided on the spread of mutant variants of the SARS-CoV-2 virus, which causes COVID-19, but Henry estimated that "around 75% of cases" are variants.

Dix and Henry addressed how the province's vaccination campaign is set to accelerate thanks to increased supply of doses.

The province has not set a record for the number of doses administered in a 24-hour period since April 16, when officials provided 46,227 jabs in arms.

Henry said B.C. will get its first doses of Johnson & Johnson's Janssen vaccine next week.

B.C. received 138,000 doses of the Pfizer vaccine this week. The size of next week's shipment, however, is set to double, and be 276,000 doses each week through the end of May. The province is expected to get more than one million doses of this vaccine in May, according to Henry.

The province also expects to get another shipment of Moderna vaccine in mid-May.

Henry was asked at the afternoon news conference if she would apologize for what some consider a botched roll-out of pop-up clinics that were supposed to be exclusively for people aged 30 years old and older, who live in COVID-19 hot spots. People lined up for hours at a pop-up clinic in Coquitlam, which is not a hot spot, with many getting doses of vaccine even if they did not reside in a hot spot.

"I absolutely apologize to people for for the miscommunications and for the confusion," Henry said.

Earlier today, Fraser Health CEO Victoria Lee also said she "sincerely apologizes" for the confusion over the clinics for those in hot spots, and said that no more are planned at this time.

Henry said the "vast majority" of B.C.'s vaccine doses are steered toward the province's age-based vaccination program, for which people aged 58 years old and older are eligible to book appointments via the province's registration website.

A separate vaccine roll-out stream is done through participating pharmacies.

Pop-up clinics is a third way vaccines are being provided. Those clinics are intended to provide vaccines to people who live in areas with a high level of transmission, and to those in specific occupations.

Thre virus has not stopped entering seniors' homes, as one new outbreak has been reported at Spring Valley Care Centre in Kelowna.

The outbreaks at UBC Hospital in Vancouver, and Vancouver General Hospital are now listed as being over.