The biggest impact has been felt by facilities that primarily offer group fitness classes, like yoga studios.
Apr 1, 2021 9:23 PM By: Steven Chua 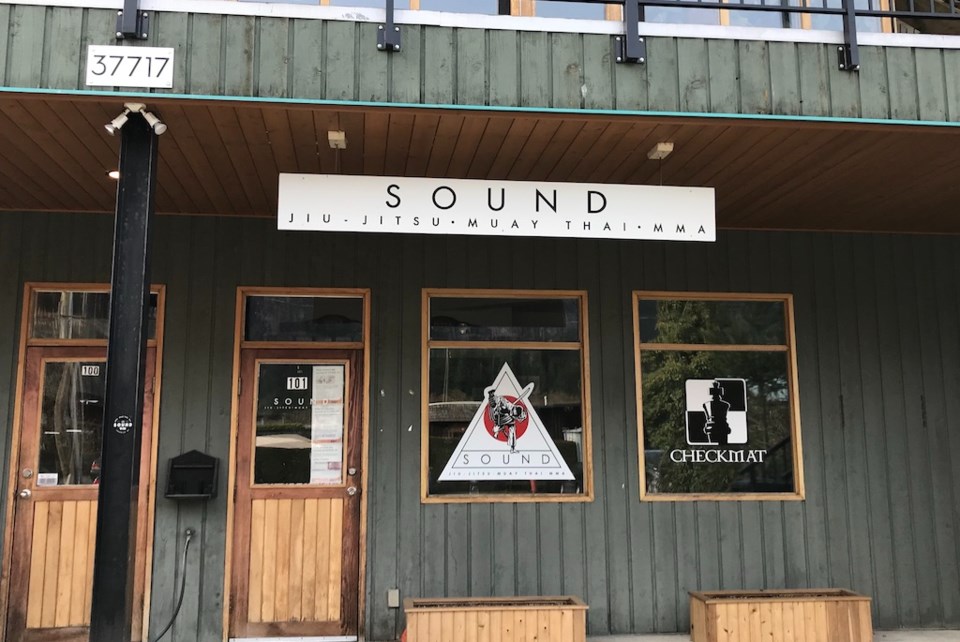 The Sound Martial Arts in Squamish. Local gyms are struggling under the weight of yet more COVID-19 restrictions. Jennifer Thuncher

A provincewide ban on indoor group activities has set its crosshairs on Squamish gyms, creating great difficulty for owners of local fitness facilities in at least some cases.

On March 29, Provincial Health Officer Dr. Bonnie Henry issued an order directing all fitness facilities to shut down adult group activities until April 19. The directive arrived as officials throughout the country expressed worries about a third wave's potential to sweep the nation.

As of April 1, it seems like the numbers will not be decreasing to a comfortable level in the near future.

Henry reported 832 more people tested positive for the virus in the past day, raising the total number of people infected in B.C. since January 2020 to 100,880.

There are 296 people in the hospital with the virus, and 79 of those are in intensive care units.

Facilities that cater mainly to group fitness activities are suffering the most.

Annalize Hazel, the owner of Breathe Fitness, says the order has had a devastating effect on her business.

She's been forced to shut down her studio for — by her count — the fifth time as a result of various restrictions imposed by the province.

It hurts more because her type of business — which is based on group hot yoga and fitness sessions — is the only type of activity that's had to shut down completely. Restaurants can still do take-out, she noted.

Hot fitness sessions are impossible to do under the restrictions. Things are looking grim.

"We have no memberships. All our members from last year before COVID, we've lost them. We don't really know if we have a business right now," she said.

"It's money out of our own pockets right now."

With multiple closures happening, her instructors have either had to get other part-time jobs or just stop teaching yoga completely. They've lost their jobs five times.

Hazel said the business has tried to be creative with online solutions, including internet classes and an app, but this isn't cutting it.

"Everyone's now doing online and it's all free," she said. "It's saturated. It's like there's only so much free action you can do. I am kind of at the end now. Is it worth me reopening even if we are allowed to on [April 19]?"

Her business also has an online retail shop, but that can't be counted on to turn things around.

"Any sales right now isn't really going to make a difference to be honest," she said.

Hazel added she was frustrated because the classes are low-intensity, meaning there is reduced respiratory activity, reduced class sizes, and physical distancing and masking requirements are all being followed.

"We're doing everything we can, but the trust in the community is gone," she said. "People are not spending money. They're not going to come back to the studio and spend money until the restrictions lift."

Once the next lockdown is done, people need to show up in person and obey safety protocols.

"We need the support. We need the bodies in the space, and the only way we can do that is by getting vaccinated and so that we can get back to some normality," Hazel said.

Other gyms are reporting difficulties as well.

Lauren Watson, owner of Ground Up Climbing, said her gym is able to continue operating, but the pandemic as a whole has created many financial challenges.

Group classes for adults have been cancelled, but much of the regular climbing fare the gym provides is still available.

Regardless, things haven't been easy.

"They're rough. We're heavily subsidized. We feel very well supported by the community, but, financially, in purgatory," said Watson.

"Our revenue's way down and we can't do anything about that."

The Canada Emergency Wage Subsidy has been the main factor keeping her staff on the job, she said.

However, Watson pointed out that Ground Up has been relatively lucky compared with other businesses that have been hit much harder.

"Support how it's comfortable for you," said Watson, noting that not everyone may feel safe working out inside.

There is swag on sale at the gym, she noted. However, while it's a financially hard time, there doesn't seem to be any immediate danger of the business going under.

"When we need help or when we're struggling in a really big way, we will reach out and we'll innovate and we'll come up with things," Watson said.

The owner of the Squamish Athletic Club said she's noticed that attendance numbers have gone down significantly since the order was instituted on Monday.

"Regulars are still coming in, but last night it was empty — I couldn't believe it," said Thomasina Pidgeon.

"For about half an hour, there was nobody in there at peak hours, which was really strange."

Pidgeon said that programming-wise, however, there hasn't been a change, as the club had already cancelled its group classes months ago.

She said people shouldn't be afraid to come work out individually, as it's still safe, and exercise is key to maintaining mental health.

"It's more beneficial to go work out than to stay at home and stress out about stuff. I think exercise is really beneficial mentally and physically," she said.

Pidgeon also had some words regarding the notion that younger people are disobeying health orders.

"The young folks need to remember that they have parents, and that the people around them...might be [immuno]compromised and not look like it even though they are at a gym," she said.

The Ninja Gym, however, seems to be relatively unaffected by the recent order.

Owner Gary McFarlane said that his facility is considered recreational rather than aerobic. The order applies to the latter, but not the former.

He said the gym is keeping occupancy low and people separated.

The order hasn't changed much, he said.

"We've just been instructed to follow our protocols, and, as long as we do that, there are no concerns and they can keep coming in and bringing their kids," McFarlane said.

There are also some outdoor classes for adults whenever the weather's good, he said.

However, kids' classes are in less of a bind.

"The kids' stuff is OK just because of the fewer restrictions with the kids — the fact that they're actually allowed to come and do group classes still," O'Connor said.

While there haven't been immediate financial effects from the Monday order, he said he's concerned fewer class options means there will inevitably be cancellations.

It's a tough spot to be in.

"We're scraping by already just to begin with. Even at the best of times [with] zero restrictions, we're more or less just covering cost," said O'Connor.

He said The Sound's members have been supportive, though he had some words about the future of Squamish gyms.

"If you want us to be here when all this is over, you got to help us," O'Connor said.