How to adapt your pet to climate change

New research out of the University of British Columbia is looking to shine a light how pet owners can best prepare their animals for what's to come, while at the same time lowering their carbon footprint.

"Unequivocal" is the word leading scientists now use to describe humanity's devastating impacts on the planet’s climate system.

But as communities around the world look to adapt to increased heat waves, wildfires and flooding, how the world’s cats and dogs will cope with climate change is less clear.

Now, new research out of the University of British Columbia is looking to shine a light on how pet owners can best prepare their animals for what’s to come, while at the same time lowering their carbon footprint.

Understanding where pets fit into a warming world was made all the more urgent in late June, when a heat wave smashed dozens of B.C. temperature records.

Just how many domestic animals died in the recent heat wave is still being investigated. But according to a study Protopopova and her colleagues published in a recent issue of Integrative and Comparative Biology, owners are not helpless to mitigate the worst effects of climate change on their pets — nor the worst effects of pets on climate change.

A changing climate is expected to increase the spread of infectious diseases, especially zoonotic ones that jump from animal to animal and animal to human.

Along Canada’s southern border, for example, warmer temperatures have been linked to a northward expansion of ticks and associated incidents of Lyme disease.

The same goes for heartworm infections, a mosquito-borne contagion that in the past was typically only found in the southern U.S. Climate-driven ecological changes are expanding that range.

“Even dog bites do go up with higher temperatures,” says Protopopova. “This is a huge human health worry.”

What can a pet owner do? In an extreme heat event, offering your animals water, shade and a place to swim are all important aspects of being a responsible guardian.

“One thing that a lot of dog owners forget is the pavement is very hot, much hotter than the air temperature,” says Protopopova.

She recommends avoiding dog walks during the hottest times of year, leaving windows open at home and never leaving your animal in a car alone on a hot day.

And while this might all seem like common sense, studies have shown pets regularly impact how humans respond in the face of an emergency.

The researchers note a reduction in dog walking due to increased wildfire smoke or extreme heat could lead to problem behaviour and more dogs ending up in shelters.

Owning a pet during a heat wave can lead humans to make unfortunate choices for themselves as well.

Past research has found eight per cent of elderly, low-income Americans would stay home with their pets during an evacuation; another 16 per cent said they wouldn’t leave without them.

Another 2020 study found more than 10 per cent of respondents would avoid or delay COVID-19 treatment over concerns for their pet's welfare.

Finding a way to balance human and pet welfare in the face of an emergency is one thing. Trying to make sure your dog or cat doesn’t contribute to climate change is where things get complicated. 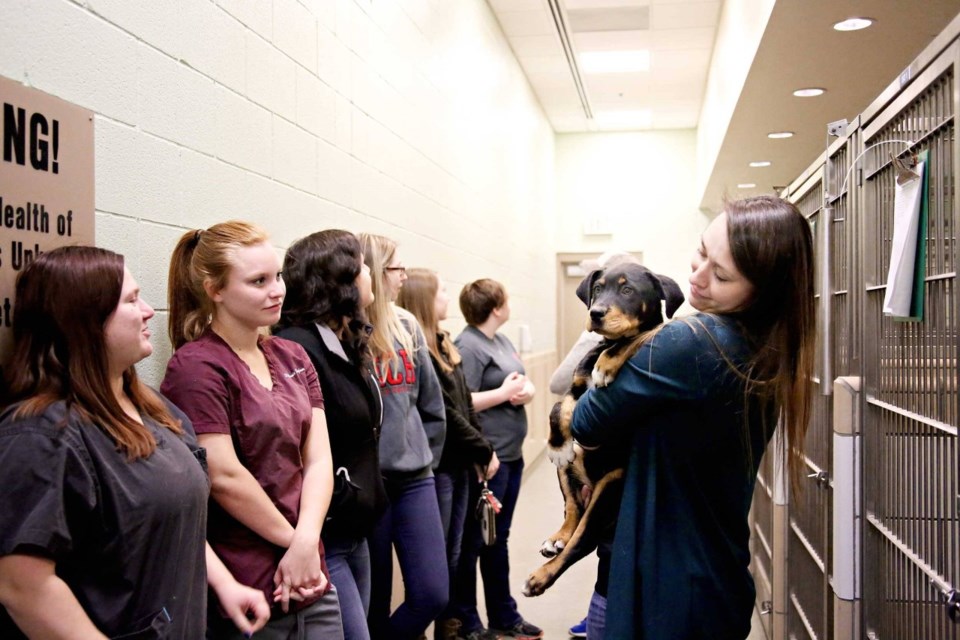 Past studies indicate that in 2018, there were roughly 373 million cats and 471 million dogs kept as pets worldwide.

Protopopova and her co-authors say this is likely a huge underestimate and does nothing to account for unregistered animals and other companion animals like birds, reptiles and small mammals. Feral dogs alone are thought to number up to one billion globally. Cats living on their own, meanwhile, are believed to be around the 480-million mark.

That’s a lot of mouths to feed and even more money to make.

The global pet care and supplies market is worth roughly US$225 billion and is expected to expand to $359 billion by 2027.

What does that mean for global emissions?

In a widely cited 2017 study, UCLA’s Gregory Okin estimated U.S. cat and dog food accounted for up to 30 per cent of the environmental impacts from animal food production, including an estimated 64 million tones of CO2-equivalent methane and nitrous oxide that is released into the atmosphere every year.

Globally, these impacts may be lower. Protopopova says the latest modelling estimates pet food accounts for up to three per cent of greenhouse gas emissions and one per cent of all agricultural land use. Still, pet ownership is rapidly rising in many countries.

“A lot of us discount the effect of pet food, simply because we assume pet food comes from human food by-products,” says Protopopova. “But a lot of pet guardians are choosing human-grade ingredients. All of this does increase greenhouse gas emissions.”

Like Okin, Protopopova suggests that pet owners avoid the “humanization” of pet food so as not to compete with human food systems.

In a world where human food scarcity is expected to increase, reducing this competition will ease pressure on hungry populations, estimated to have risen by 161 million in 2020.

At the same time, Protopopova is careful not to suggest one kind of pet food over another. There’s just not enough research out there that says raw food produces more emissions than heavily processed foods, for example.

Many owners, she says, rightfully look to balance animal welfare with doing what benefits the rest of the planet.

FOR A CLIMATE-FRIENDLY PET, PLAN AHEAD, DEMAND TRANSPARENCY

Thinking sustainably could also mean falling in love with another species. Instead of taking on a cat or dog, consider a less energy-intensive pet like a bird, rat or hamster, says Protopopova.

If you are set on a dog, adopting from an animal shelter, fostering, or sharing ownership across several families are all better options than going to a breeder.

One reason for that is sheer numbers — driving the industry to breed more animals puts more environmental pressure on the planet. Another reason comes down to avoiding the breeding of purebred species that are often more vulnerable to extreme weather.

Protopopova says it’s time to put pressure on breeders to stop selecting physical qualities that will challenge an animal during an extreme heat event. Think pugs and bulldogs, short-faced dogs that tend to suffer in extreme conditions.

More robust breeds, often mixed, will mean fewer car trips to the beach and less time with the air conditioner on — all practices that collectively drive up emissions.

Owners are very committed to providing welfare to their pets, says Protopopova. Avoid choosing between your pet and climate change by choosing a smaller dog that will consume less food. Don’t adopt a Husky in Arizona. Strike up a relationship with a rat or hen. In short, match your companion animal to a changing climate, she says.

In the end, many owners are prepared to be more mindful. But making the right decision for your pet and the planet can be nearly impossible without adequate transparency.

Protopopova tells Glacier Media more pressure needs to be put on pet food manufacturers to disclose the impact that food has on emissions and global hunger.

“As consumers, we really need the industry to show us what goes into the food and what are the resulting emissions,” she says.

Stefan Labbé is a solutions journalist. That means he covers how people are responding to problems linked to climate change — from housing to energy and everything in between. Have a story idea? Get in touch. Email slabbe@glaciermedia.ca.