Seniors still in 'limbo' six months after homes swept away in B.C. storm

Othello Road homeowners had to watch their homes get swept into the Coquihalla River during last November's storms. Six months later, they're still homeless and in 'limbo' waiting for support.

Graham Zillwood's house was the first to be swept away into the Coquihalla River during a series of storms last November.

His entire property on Othello Road was swallowed by the river, leaving just an aluminum boat behind.

"I used to think the golden years would be great, things would be almost paid and I had a nice place,” says Zillwood. "It’s just gone and I don’t have anywhere to live.”

Zillwood, 67, cannot return to the property and has been notified it is not livable. It’s been assessed and valued at $1. He says his mortgage company is demanding he still pay the mortgage.

"They’re just burying me here and they don’t care,” he tells Glacier Media.

Zillwood purchased the property 18 years ago and says he’s been paying the mortgage on time ever since. He says there are about six years left on the mortgage, roughly $36,000.

"I am only on old-age pension and I’ve been making this payment of almost $900 a month and I haven’t been able to afford to go anywhere,” he says.

For the last six months, he’s been staying with his daughter and sleeping in his granddaughter's room.

"I need a home, but I don’t make enough to even rent anything and now with this possible lawsuit... it’s just ridiculous.”

Two days after his home was swept away, Zillwood contacted his mortgage company. He did receive about $30,000 from his insurance, money he says he put on his mortgage.

"Mother Nature did this. It was nothing I did or other homeowners did. We were lucky to get our lives out,” he says.

Glacier Media reached out to First National for a response to Zillwood’s situation and was told “for privacy purposes, we cannot speak publicly about our borrowers or individual mortgage files in any detail.”

In a written statement, chief financial officer Robert Inglis stated “we can assure you that First National cares about this customer and the hundreds of thousands of other Canadians who choose us as their lender” and "we continue to work with the borrower and insurers toward a solution satisfactory to all stakeholders in this unfortunate situation.”

Zillwood is at a loss and says he’s losing sleep.

"How six months can change your life... and at my age, it’s just too late to recover,” he says.

Since the storm, Zillwood says he has not received any funding from disaster financial assistance (DFA) but has recently been estimated to receive about $100,000. In 2022, Zillwood’s property was assessed at $445,000.

"I don’t know what I am going to do. I can’t afford to rent. I am not going to get enough to buy anything. I always try to be optimistic, but it is getting really hard to do that now,” he says.

Emergency Management BC says they know this has been a challenging time for people and communities impacted by flooding and landslides.

In a written statement, a spokesperson says DFA payments are a provincial program and it provides or reinstates the necessities of life, including help to repair and restore damaged homes. Land damage is not eligible.

“In situations where the home is lost or completely destroyed, a DFA applicant is likely to receive the assessed value of the eligible improvements (structures) on the property — up to a maximum of $300,000,” says the spokesperson.

DFA payments typically arrive within “a month” of the payment letter, depending on the postal service.

To date, 954 DFA applications have been processed and the province has received more than 2,200 applications from individuals, small businesses, farms, charitable organizations, and local governments impacted by the November 2021 flooding.

"Typically, Emergency Management BC receives an average 450 applications a year. To support this surge in applications we’ve implemented a number of operational improvements, including increased administrative and field staff and additional management staff to approve and process payments,” says the spokesperson.

Zillwood isn’t the only homeowner waiting in limbo. His neighbours are waiting too.

Jenelle Staetter wishes there was more she could do to help her parents, who also lost their home on Othello Road.

"It’s a feeling of helplessness. There’s literally nothing I can do and that’s the worst feeling ever,” she says.

Their property was a few acres in size, had an orchard garden and it was a place Staetter looks back on with fond family memories.

"It used to be this feeling of excitement as we would get off the freeway into Hope and [now] it is just this pit in my stomach,” she says.

Her parents, Katrina and Don Page, chose to leave their home on Nov. 14 — with all of their animals in tow— after the first storm caused the area to flood.

"Their neighbour's house had washed away [during that first flood], the street pretty much ended right near there. We thought that was devastating,” she says.

The pair returned home shortly after, she adds, and tried to access help by calling both the City of Hope and the Fraser Valley Regional District (FVRD).

“They were trying to just reach anyone to do something.”

A few days later, her parents watched the water rise and take their home with it.

Both Zillwood and Staetter’s parents say they weren’t given enough warning or support.

"We had no warning about this. The regional district did nothing to tell us this was going to happen. I almost lost my life. Some responsibility has to be taken instead of us carrying it all,” says Zillwood.

In November, the FVRD said its emergency operations centre sent an urgent request to Emergency Management BC on Nov. 24, but their pleas went unanswered until five days later.

“We finally received verbal approval to save Othello Road late last night, but by then the road was gone, so were the houses,” FVRD chair Jason Lum said at the time. “During an emergency, we need our partners in government to react quickly, and when a response comes not hours but days after the fact, it's clear the provincial system is failing us and the residents of our elected areas.”

Katrina and Don have spent the last six months living out of their trailer with their three dogs and cat.

"They were retired, they had no mortgage, they don’t qualify for another mortgage at this point because they’re retired. So everything they had built up is just gone. What do you even do when you’re in that situation?” questions Staetter.

All they were able to salvage from the storm was a photograph from their fridge showing Don on vacation. Its new home is on their trailer fridge.

"You’re retired, you built this all up for yourself, you paid off all your mortgage and now you have nothing,” says Staetter.

The couple spent the past seven years fixing up their dream home. The lush property with trees and grass has now been built back up with gravel, leaving no sign that the property even used to be there.

"You just hope one day you'll wake up and it didn’t really happen,” says Staetter.

Katrina and Don have not received their DFA estimate or any indication of when they could receive financial support.

"There’s nothing final, nothing coming,” she says. “So they sit in limbo." 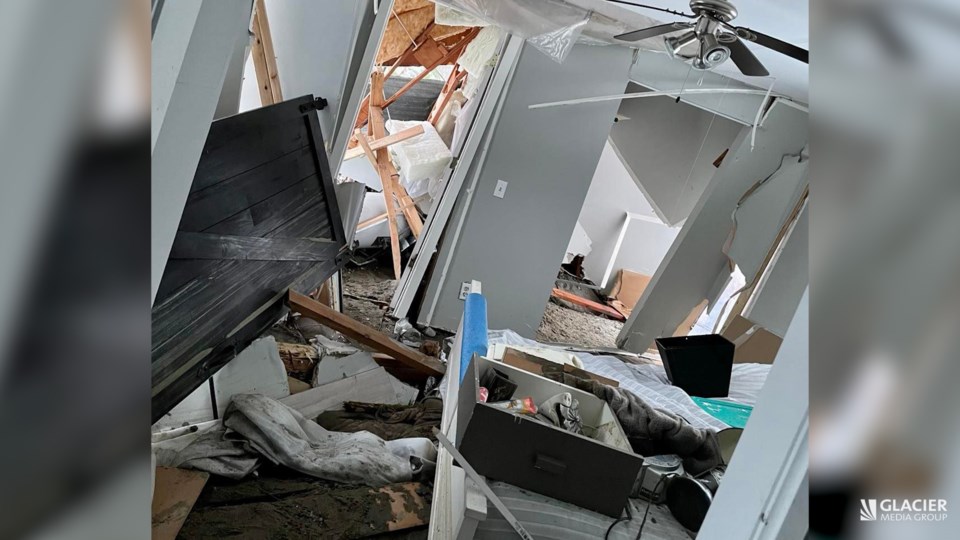