About a local: Capturing remarkable images 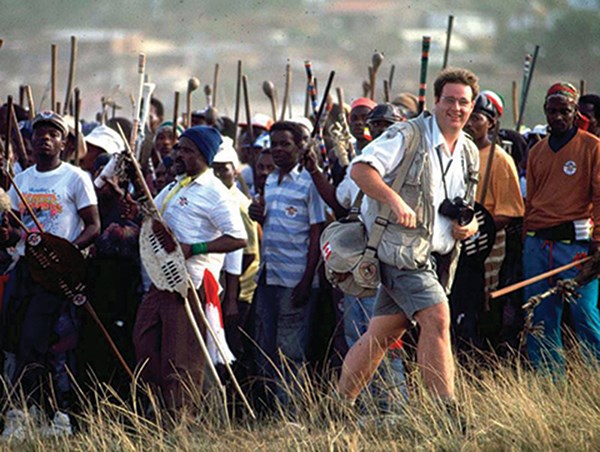 Whether you know it or not, you have likely seen David Buzzard’s work.

His photography often graces the pages of The Squamish Chief and its sister papers in Whistler.

If you somehow haven’t caught his newspaper images you may have seen some of the hundreds of wedding photos he’s taken over the years. Glossy pages of several B.C. magazines also feature his commercial work.

The Chief sat down with 48-year-old Buzzard to chat about life and capturing images.

This is an edited version of that conversation.

Q: Where were you born and where did you live growing up?

A: I was born in South Africa and then when my parents split up when my brother and I were quite young, my mom went to Kenya for two years and took us with her. In the early 1970s she worked for a company that produced stock movie footage of animals in the national parks.

Later when I was in my teens, in 1986, we moved to Vancouver and then to Whistler where my family owned the old KOA campground.

Q: When you were a kid, did you know you wanted to be a photographer?

A: Totally. My mother gave me all of her equipment when I was 10 or 12 and I have been shooting ever since.

Q: What was your first camera?

A: It was a Nikon Nikkormat, which was a camera Nikon built for combat photography in Vietnam. I used to drag it off to school and take all kinds of pictures there. All through high school I was freelancing for anybody who would pay me to take a photo.

Q: What cameras do you use now?

A: My main two go-to cameras are Nikon D3s. I also have a Nikon D800, which is a specialized camera that shoots 36-megapixel images, for my commercial work. (Check out Buzzard’s commercial work at www.media-centre.ca)

Q: You went to photography school?

A: I went off and did a year of photo school in Victoria at a place that isn’t there anymore called the Western Pacific Academy of Photography, which basically produced all of the news photographers in the Lower Mainland for a generation.

Q: You then worked at newspapers in Whistler and then for Blackcomb for a time as a ski photographer and then you ended up in Surrey at a newspaper there, correct?

A: Yeah, I worked for a Surrey paper and I hated it. It was nothing but shootings and killings and maiming for the whole time I was there, in about 1993. We had somebody who got cooked in a pizza oven there – it is a long story.

Six months later I was off to Durban, South Africa and worked as a photojournalist there before coming back to the Sea to Sky Corridor in 1997.

Q: You have acknowledged you suffered from post-traumatic stress disorder from your time in Africa, correct?

A: Yes. Toward the latter half of the time I was there, the election was over and there was a lot of fighting between the different political factions. They would go and shoot up one little village and kill all the women and children and in retaliation the other side would go and kill all the women and children in some other village and it was really getting to me. And nobody really cared about it, which didn’t help. It took two years for my hands to stop shaking.

Then, in about 2010, one photojournalist I worked with in South Africa got both his legs blown off working in Iraq and another guy was killed in Libya and I had a serious, delayed PTSD reaction; It smoked me for a while. A little later they asked me to come work for the newspaper the Whistler Question. All the symptoms disappeared when I went back to being a photojournalist, it was weird.

PTSD, of course, doesn’t just happen to photojournalists, it happens to journalists and first responders. You have got to be aware of the stress that comes with the job.

Q: Did you ever seek help for your PTSD?

A: Oh, God no. Today, I would say yes, you should. I mean if you tore a ligament in your knee you would go see somebody. But it doesn’t seem to be a problem for me now.

Q: How have you dealt with it?

A: I fight being cynical. I try to look and think there is something good everywhere you go and you can change things with the work. People can get away with anything if you stop telling the story.

Q: Thinking specifically of your newspaper photography in Squamish, what was one of your more memorable shoots?

A: In the early 1990s I photographed Dr. Hook. He played at the nightclub at the Chieftain Hotel, which is now the Knotty Burl. Back then it was the nastiest place you have ever been to. I guess poor old Dr. Hook was none too happy about playing in Squamish and having someone take his photo. He took his cigarette and flicked it right at me and it hit my chest and went under my shirt (Buzzard laughs heartily).

Q: Who are the hardest people to photograph? Politicians?

A: Politicians are easy because they are very photo conscious. The hardest is when someone has had a tragedy. A couple of summers ago there was a fire in Pemberton and I went up and some guys’ mobile home was on fire. I took a quick photo and was getting out of there and these guys who lived there cornered me and they were not happy. That is tough, when you are trying not to be intrusive, but you are. But you don’t get to pick and choose the things that you have to cover. And everybody deserves to have their story told.