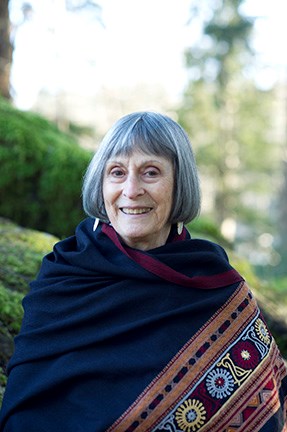 Author, Emmy-nominated screenwriter and activist Pauline Le Bel has turned her attention to Howe Sound in her book, Whale in the Door: A Community Unites to Protect B.C.’s Howe Sound. The book is part history of the sound, part activist opposition to industrialization of the sound and part homage to the Squamish Nation.

Le Bel will be at the Squamish Public Library on Tuesday, Nov. 7 at 6 p.m. to discuss the book and issues that impact the sound.

In advance of her presentation, The Chief sat down with Le Bel for a wide-ranging chat about her book and her love of Howe Sound.

What follows is an edited version of that conversation.

Q: How did it come about that MP and leader of the Green Party of Canada, Elizabeth May, wrote the forward to your book?

A: The publishers at Caitlin Press asked her. I had met her a couple of times, not that she would remember me at all or anything.

Q: You have done so many different things over the years, why this book about Howe Sound and why now?

A: I wanted to write on nature. I was covering as a columnist the Skwomesh Action anti-Woodfibre LNG rally [in March 2015]. I was really impressed; there were about 500 people there in the pouring rain. I wrote a column about it and then another and finally the editor at the Bowen Island Undercurrent said, “Why don’t you write a book?” So I did. That was almost three years ago.

Q: You bring up something in the book that all of us who are non-native writers struggle with and that is speaking about Aboriginal issues and telling Indigenous stories, when you are not First Nations. How did you come to terms with that?

A: I had been writing about the environment and the more research you do, you realize there’s no pristine environment that hasn’t had people in it. First Nations have been here for thousands of years so to tell the story of Howe Sound, I have to include them — they have been invisible on their own land for far too long. I went through some moments thinking, “Who am I to be writing this?” I got permissions from everyone in the book. I interviewed them and I would ask if what I wrote was OK.

First Nations are still very much here and so they had to be very included in the book.

Q: One thing about your book is that you talk a lot about the nation and some members opposed to Woodfibre LNG, but the Nation’s chiefs and council did support the Woodfibre LNG application. You can’t negate  hat was their choice in the end, right?

A: Yes, they supported it with those 25 conditions… but Squamish Nation [members] didn’t approve it. It was 16 people who decided. And we [settlers] imposed that system on First Nations. That is never the way a decision would have been made 150 years ago. None of this is ever simple.

Q: It is a somewhat unfair question, perhaps, because you are writing a book and not a news story, but I’m thinking as a journalist, did you approach Woodfibre LNG for their side of things in terms of the environment and Howe Sound?

A: I did not approach them. I thought about it, and I didn’t think I could. I talk to the Squamish Terminals in it, so I wasn’t all pro one side, because they have a very different view of things.

Q: Everything you say in the book about Howe Sound, how it has recovered and the importance of it is true, but the LNG plant isn’t the only thing impacting it. Especially in Squamish, development is booming and that could have a huge impact on the environment too. Did you get that feedback as well?

A: Maybe I didn’t stress it enough in the book, but yes I did.

We need better transportation, rapid regional transportation. I don’t drive and I can’t take a bus from Horseshoe Bay to Squamish! I have to go all the way into Vancouver. That has to be changed.

I also learned Squamish doesn’t have tertiary treatment of sewage/wastewater that enters Howe Sound. This could be just as bad as anything.

[The Chief reached out to the District of Squamish about this issue and received the following reply: “This is accurate. The District of Squamish utilizes both a primary and secondary treatment process for wastewater. UV disinfection is then used to treat effluent before it enters Howe Sound…. A detailed environmental impact study of effluent discharge to the Squamish River concluded that tertiary treatment was not needed to meet provincial/federal wastewater discharge requirements. The need for disinfection was identified as a means of improving water quality, which led to the introduction of UV disinfection in 2017.”]

A: I hope the people who make decisions read this. I hope they fall in love with Howe Sound. It is such a special place and it has been treated so badly in the past.

Le Bel will be at the Squamish Public Library on Tuesday, from 6 to 8 p.m.