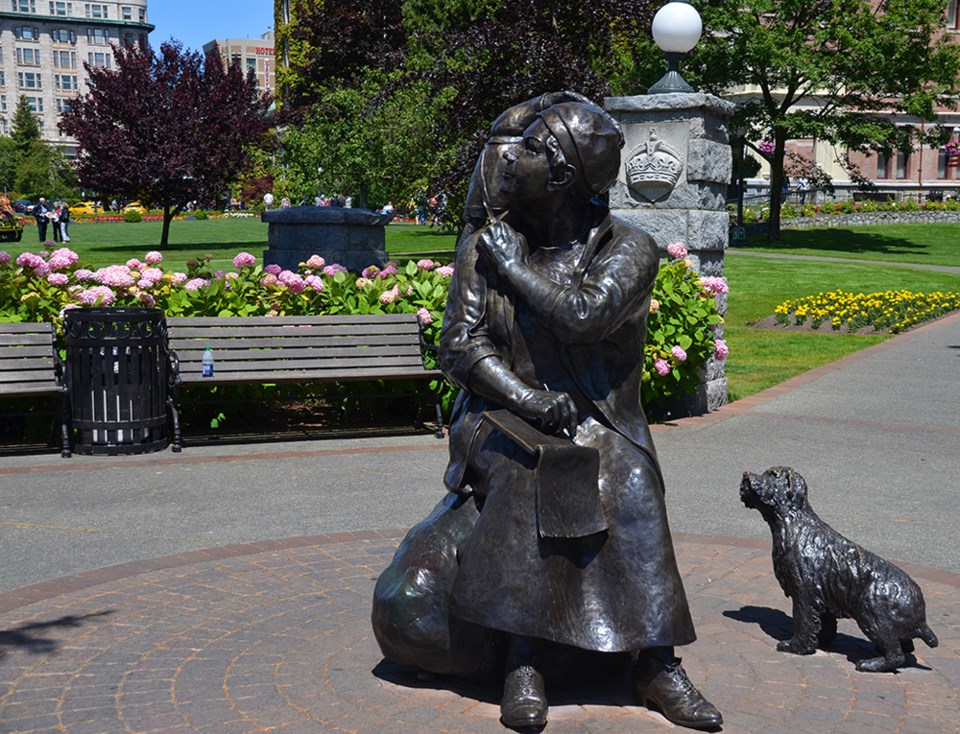 The statue of Emily Carr in Victoria.Shutterstock

Carter's latest book Emily Carr's B.C.: South Coast to the Interior, is the final instalment of the writer's trilogy on Carr. It features Carr's life from her return to B.C. after studying in England in 1904 to her final expedition up the Sea to Sky and through Lillooet in 1933.

Carr stopped for some time in Brackendale to visit her niece Lillian Rae .

Carter is presenting on Carr and this trip at a free talk at Squamish Public Library on Oct. 3 at 6:30 p.m.

In her writings, Carr talked of happy times in Squamish.

"She always had a really good family time there," said Carter.

But the trip up to Lillooet wasn't all rosy.

Just the day after she left Brackendale and arrived in Lillooet, Carr had to have her long-suffering dog put down. When she was unable to find a vet to do it, she worked out an alternative.

"She found a police constable and got him to shoot the dog for her. There was no other way she could get it humanely put down," Carter said. "She, the police officer and a guy who was a convict — he had been in jail overnight — go across the Fraser River and that dog Koko is buried on the far side of the Fraser River."

Though it was very unusual for women to travel extensively at the time, Carr started her adventures in 1907 with a cruise to Alaska with her sister. This is what piqued Carr's interest in First Nations, according to Carter, and later led to a trek to Haida Gwaii in 1912.

"When I do presentations about those early trips, I actually wear what she would have worn, the kind of clothes: the long skirt with the big back end on it, suitable to accommodate a bustle, a long-sleeved, high-neck dress. With that, she was getting in and out of canoes, trekking around. It was amazing."

Carr’s last great expedition was in 1933 and included Squamish.

After this trip, she stayed close to her home in Victoria.

Carter acknowledges that though remembered as a preeminent artist, Carr also carries a reputation as prickly and odd.

"I think the reason for that is she was so focused and so pressed. She had essentially given up everything [for art]," Carter said.

A man had pursued Carr for marriage and even followed her to England to try and convince her to marry him.

"She came to the realization that a woman in her age — it was about 1900 when she turned down the marriage proposal — if she was going to be an artist, she couldn't combine that with being a wife as well. She recognized that. She had given up all of that. She was utterly focussed on art."

Add to her passion that she was on a self-imposed mission to record First Nations culture in her art before the settler population and institutions eradicated it.

Perception of Carr as eccentric was sometimes just Carr being practical, Carter said.

The artist was often seen around Victoria pushing a baby carriage, though no infant. Carter said the carriage was essentially akin to a modern-day shopping cart, which was a pretty ingenious way to carry what she needed, given that Carr didn't have a car.

"I am utterly inspired by her — by her single-mindedness, by her flexibility and her practicality," Carter said.

Carter also praises Carr for pivoting in her later years to do something creative once travelling to paint was no longer feasible. She started writing in her 60s and had her first book published at 69. It won a Governor General's Literary Award.

Originally from Ontario, Carter acknowledged she didn’t grow up knowing much about Carr. It was a trip to Skidegate, in Haida Gwaii with her husband that sparked her interest.

He asked a tour guide about Carr's visits to the area and Carter learned how strong and close the connection was.

"The guide said, 'It was my grandparents who were her guides,'" said Carter, who added she made a note of this and of other places on the islands Carr had stayed.

"I started to realize what an incredible traveller she’d been. I got interested and started to look at where she had gone and what she’d done.... I just got hooked. She just reeled me right in."

Emily Carr's BC: South Coast to the Interior is available online through Indigo.ca. For more information, go to lauriecarter.com.

**Please note, this story has been updated since it was first posted.