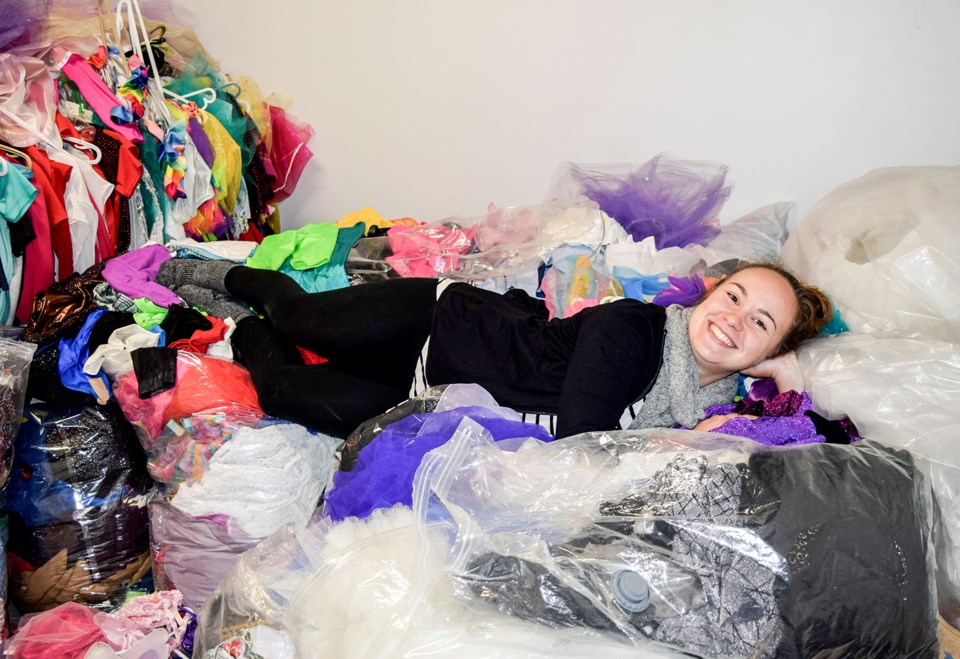 Sara Stuart, owner and director of the Squamish Dance Centre, strikes a pose on a mountain of donated costumes.Jennifer Thuncher

Sometimes life takes twists and turns that unexpectedly land us right where we wanted to be all along.

That certainly seems to be the case for Sara Stuart, owner and director of the Squamish Dance Centre.

Stuart launched the centre almost a year ago when long-time dance teacher Debbie Vidas’ Still Dancing School of Dance closed suddenly. Stuart was a former student and instructor under Vidas and soon parents from the school encouraged her to open her own dance school.

She has done just that by opening Squamish Dance Centre in January of last year, using Vidas’ school and teachings as a foundation she’s built on.

“I thought this is where I would be in 10 or 20 years,” said 23-year-old Stuart with a laugh. “In a week we found a space… we branded, we got going and it totally exploded.”

The school went from 90 students at the end of its first season to currently boasting 270 dancers with classes for two-year-olds through to adults.

“We literally want everybody to come dance,” Stuart said, adding the school has added a class just for boys this year.

A new class called Diverse-Ability Dance is soon to launch for dancers of any age who have special mental or physical needs.

“We want them to come to a class where they feel welcomed and accepted and that is specifically catered to them,” Stuart said.

Instead of parents having to hire an aid for their child during the class, senior dancers will be paired with each participant.

Stuart’s mantra is that dance should be accessible to literally everyone.

“I want everybody, all walks of life, to feel welcome and comfortable here and one way is to make it affordable, because if you can’t afford something you don’t feel comfortable doing it.”

Bags full of dance costumes, most donated by Vidas, are stacked in a second floor room of the sprawling Dance Centre on Queens Way in Squamish’s industrial park.

The students return the costumes for other students to use, instead of hanging them in a closet never to be worn again, Stuart said.

The school also has a sewing room where parents can work on recital costumes.

“Typically those would be taken home,” Stuart says. “Now while they are waiting for their kids – 45 minutes or half an hour – they can just bop in the sewing room, tackle it, leave it here if they want… come back next week.”

All the supplies are available in the room so parents don’t have to purchase their own thread or other materials.

Stuart credits Vidas with playing a huge role in her effort to make dance accessible.

“She allowed me to dance at no charge for pretty close to my entire dance life,” Stuart said. “I wouldn’t be where I am today without her support and commitment to me.”

In Vidas’ honour, a Debbie Vidas Scholarship was created and presented for the first time to a student at last season’s Squamish Dance Centre, according to Stuart.

Vidas is equally complimentary about her former student.

“I am very, very proud of Sara,” said Vidas, who taught dance in Squamish for over 30 years. “I had her since she was just a little girl, three or four years old. She’s like one of my children.”

Vidas said even from a young age Stuart was very mature for her age, describing her as an “old soul.”

“From the beginning she was just so focused,” Vidas said.Dance can be an escape from daily troubles big and small and builds confidence, she said.