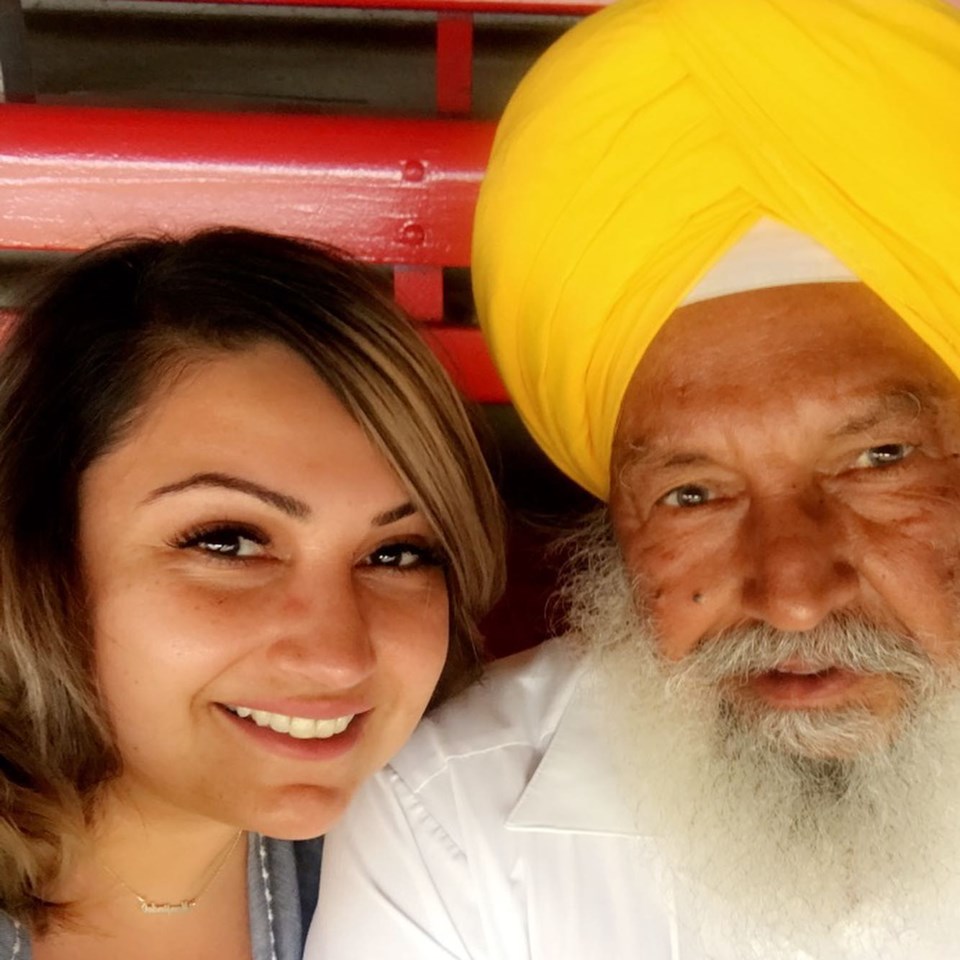 Mini Kahlon remembers a lot of loving and funny things her father did, such as buying a life-jacket for her fur baby, Niku.

It is in her father's name she is aiming to shave her head as part of a fundraiser for BC Cancer, an organization that helps fight the disease that took her beloved dad.

A Go Fund Me campaign, "The Baldification of Jin & Min," has been launched to help raise the money. Once donations reach $5,000, Mini will shave her head.

Mini's father, Rajinder Singh Kahlon, lovingly referred to as “Bapu," or grandfather, died Dec. 3, 2019, of cancer that had spread to his liver.

"He was such a colourful person," Mini said. "There was such breadth to him."

Her name was a result of her father naming his youngest and smallest child a moniker that fit her lot in life, Manjinder, or Mini.

She recalled how he participated in the Polar Bear Swim every year and adored his grandsons, Kieran and Shaan.

Kahlon, who lived in Tsawwassen when he died, had been a Sea to Sky businessman — owning True Value Hardware stores in Squamish and Lillooet — and served on Squamish council, the first traditional Sikh elected as a city councillor in Canada.

"Raj was a very gregarious man, well-liked and popular in the community at large. As a councillor, Raj was always busy in ‘outreach’ — extending his hand for a conversation with any and all...A BC Cancer fundraising initiative in Raj Kahlon’s name will be so appropriate and well-received, given his long time status and role in our community."

Kahlon was the one to keep the squash league going, French added, being the first to pick up the phone to initiate games.

"We laughed through matches. Whenever I played him, it was a good time,” said French.

What Mini misses most about her dad is just the everyday stuff.

"I really just physically miss him," she said. "Anytime something happened, he is the person I would go to for advice or to share good news."

Months after her father passed away, her dog Niku unexpectedly died of cancer as well.

The online fundraiser is launched in both her father's name and the beloved pooch's.

She recalled how after her dad died and Niku had been diagnosed with cancer, she found the life-jacket her dad had bought the dog.

Niku was able to enjoy the water a few times while wearing it in the days before he died.

"He was out on the water for the first time. It was so sweet and fun," she said. "So cool that dad had some sort of plan that we were able to actually make happen."

A strange serendipity is that after Niku died, Mini and her partner adopted a dog from Mexico without knowing the breed. They soon found it was part German Shepherd, the only type of dog her father had ever owned.

Joining Mini in the fundraiser is her friend and workmate, Harjinder Kaur Sanghera (Jin).

Both work in social services in the Downtown Eastside of Vancouver.

"We see people battling cancer far too frequently. People who may not have the same supports we did.

For them, and for countless others, there has been BC Cancer," said Mini, in a follow-up email to The Chief.

For Sanghera, the fundraiser to shave her head coincided with a desire to mark her 45th birthday.

She turned the milestone age with a weekend in Squamish in January and had wanted to shave her head to mark the occasion.

The campaign allows her to put meaning to the deed.

"And here we are," she said. "I am excited and looking forward to it."

The online campaign lasts until Feb 11, which is the United Nations’ International Day of Women and Girls in Science.

Empowering women was something her father championed and would be proud of, Mini said.

Go here for the campaign.