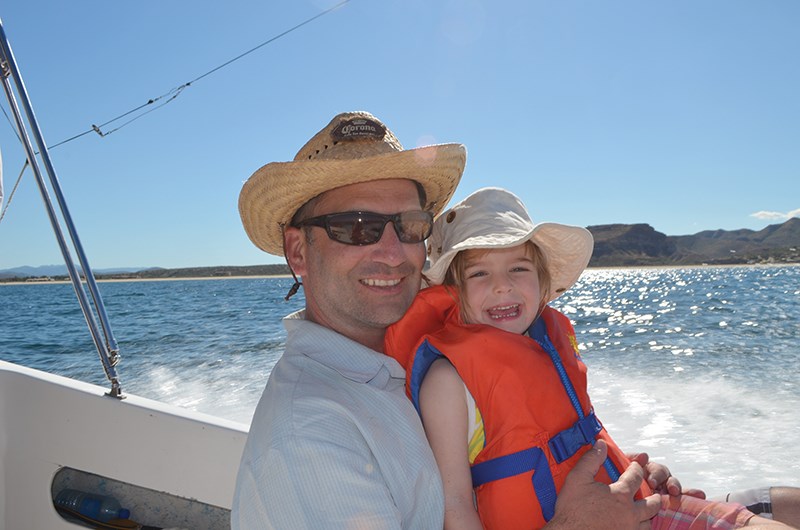 Adam Greenberg, shown with his daughter Eliana, is heading to Germany next month to take locally donated stuffed animals and cash to Syrian refugees.Submitted

Squamish’s Adam Greenberg will soon be on his way to a refugee camp, weighed down by stuffed animals and a desire to help.

Greenberg will be traveling to Germany in November and plans to visit a refugee housing unit there to bring clothes and other donations, including stuffies collected by children in Squamish.

It started when he attended a community meeting on how to help Syrian refugees held last week at the Squamish Adventure Centre.

“That’s where I learned about what those kids did,” he said.

The children, Nicole McLeod and Luca Capicik, Grade 4 Squamish students, went door to door and collected more than 200 stuffed animals for children from Syria. They presented what they did to those gathered at the meeting but said they didn’t know how to get the toys to those in need.

“I’ve got enough Air Miles points, I can travel to Germany at no cost, stay at a hotel at no cost and I’ve got plenty of money to support myself while I am there for four or five days,” Greenberg said, adding he travels often for business so has accumulated plenty of reward points. “So, I did some research, found out where those refugee camps are and decided I will make a trip over a weekend and I will go and do it myself.”

Ideally, Greenberg would also like to take cash to buy supplies for the refugees.

He said he will take photos and video and when he gets home use those images to raise more funds to help fund a family to come to Squamish.

He will be broadcasting live from the refugee camps on the live-streaming video site Periscope.

Greenberg isn’t new to philanthropy. He is currently helping a group settling Syrian refuges in Toronto and is also involved in funding an orphanage in Mexico.

“I feel like I have a pretty fortunate life, and I like to get involved and give back wherever I can,” he said. “I have been watching the news and the Syrian thing has struck me as something I should try to get involved in and show some leadership in.”

He stressed he isn’t a leader of the Syrian response group in Squamish, he is just someone trying to help. He’s committed to raising $10,000 for a refugee family being sponsored by the group in Toronto and another $10,000 for the Squamish group. Because of his work with the group in Toronto, he said he understands the steps that have to be taken to bring a family into the country. Step one is raise the funds, he said, adding to sponsor a family requires at least $30,000 that is in a separate bank account.

With any extra money over the $20,000 he has committed to raising, he will purchase needed items for the refugees while in Germany.

For information or to donate, go to www.youcaring.com and search Help a Syrian Refugee Family Come to Canada.