His labour of love: a pond at Quest

As he got through high school, his plans became a bit more ambitious: He wanted to start designing pond landscapes, sculpting them with rocks and other features.

“For my whole life, I’ve always loved to build,” he said.

Now, as he finishes his undergraduate degree, he is leaving a major project – his university keystone project, in fact – behind at Quest as a legacy.

Marston has been working since the fall on a pond that is notable for the rock features that surround the water. He has designed all of it to look as natural as possible and to remain solidly in place.

The site is designed so that it should require little maintenance, using filters as well as the plants and fish themselves, once they are in, to keep things in balance.

“It’s all self-sustaining and self-recirculating,” he said.

Ultimately, he would like to see some trees and plants to help complete the scene. “I think it has a lot of potential,” he said.

Marston admits there was some controversy when his plans had to be moved and the pond required more financial support. Some student representatives questioned the use of funds when the costs started increasing.

Initially, when he first arrived at the university, he had wanted to erect some kind of water feature in the circular area surrounded by the academic building, but the university was a bit leery about the location. Then the proposal came up to erect it on a nearby hill area, at which point Marston put together a plan, but then he learned he had to move because there were other plans for the location.

This is when the costs started to rise, and what was supposed to cost $1,800 at first turned into something that added up to roughly $6,700.

He put in some of his own money and started raising funds in Squamish. A couple of businesses, Northwest Landscape Supply and Coast Aggregates, stepped up to help with supplies and keep his costs from going even higher, specifically helping with the basalt boulders and river stone, while Rob Askew of Corporate Electric offered to help get the power system running.

At present, Marston is still fundraising for some of the final additions to the site.

Still, he thinks any delays were well timed in terms of his own experience and education, which fit nicely for his keystone project. “I felt these past few years, I needed more experience,” he said.

Marston now thinks most people on campus appreciate the work that has gone into the pond and enjoy having their own little water ecosystem.

“It’s a really high-traffic place,” he said. “I wanted to put it in a place where students naturally interact with it.”

He said his poetry class even came out to write in the meditative environment.

After Marston graduates this spring, he will line up the last features, then leave behind his project for future students, but he plans to come back to see how things have taken shape, especially with the plants and trees.

The Quest pond should ultimately help him get Aquascape certification so that when he returns home to Massachusetts, he can start his own business. Once he gets home, he plans to build a similar pond at his old high school, which should help get his name circulating through the community.

He also hopes the pond inspires future Quest students to think of ways to add to the already stunning location in the mountains above Squamish.

Marston and other Quest students will be making short presentations about their keystone projects at the university throughout the day on April 28 and 29. 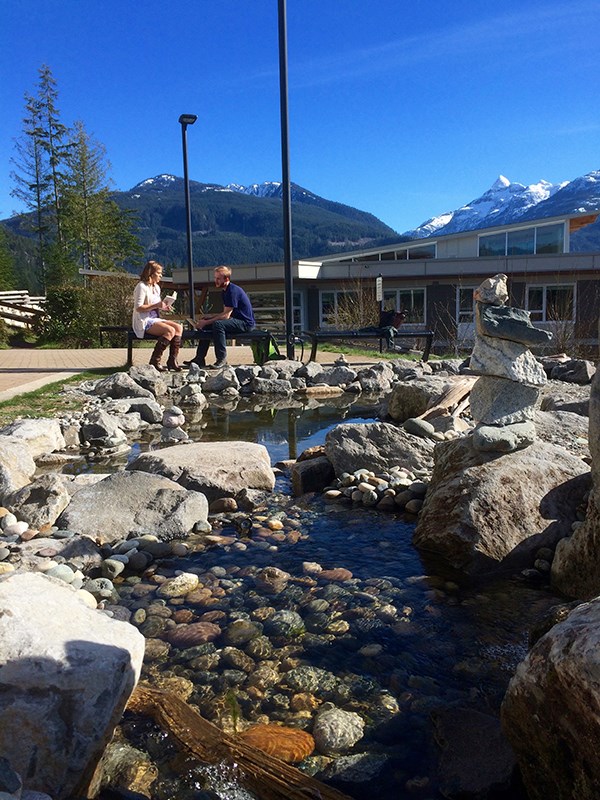 Photos: Two Squamish students chosen as mayor and deputy mayor for the day
May 18, 2022 12:25 PM
Comments