Hope for an ALS cure for Squamish ski instructor, and others like him

In the summer of 2018, Squamish's Ryoichi Hosoya felt a weird feeling in his right foot.

Hosoya, a ski instructor at Whistler Blackcomb for more than two decades, waited it out, but when his foot didn't get better, he sought out physiotherapy.

It was determined he had something called foot drop, or a weak foot, said his wife Winnie Hosoya, who spoke to The Chief on behalf of the couple on June 4. 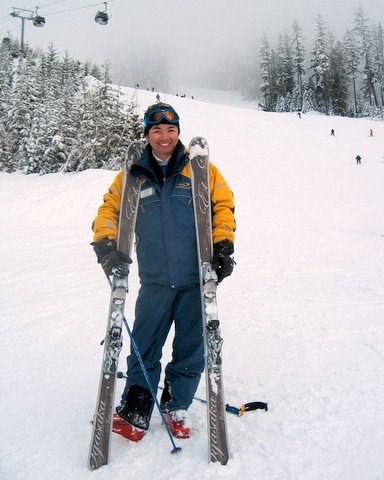 A few months of unsuccessful therapy later, and approaching his season on the mountain, he started to seek out other medical diagnoses. Doctors, too, thought at first he had foot drop.

Many tests later, on March 9, 2019, he was diagnosed as having Amyotrophic Lateral Sclerosis (ALS, also known as Lou Gehrig's disease).

"ALS is the most terrible disease. The person who has ALS has just the worst — their body just keeps deteriorating and eventually they will stop breathing and they will just die without even having a voice. It is just horrible, horrible suffering," said Hosoya.

She acknowledges she didn't know anything about the disease before he was diagnosed.

Part of the reason for the couple going public is to raise awareness of the disease in the Sea to Sky.

Once diagnosed, the disease progressed quickly.

"We didn't think he would last to the end of the winter," Hosoya said, reflecting on that dark time. "He was pretty much on 24-hour care, and I had to feed him. I couldn't even touch him because he was in so much pain."

Fast forward — having exhausted his B.C. options, The Hosoyas have been in Anaheim, California for a Phase 3 stem cell therapy trial since December.

He has had three cell transplants in total, the last one at the end of March

Since then, COVID-19 has swept the globe and more recent protests against police brutality have filled the streets across North America.

"Funny enough... we were going through this by ourselves, but then we feel like, 'Oh Gosh, this isn't so bad. The world is actually in a lot of pain together with us,'" she said. "That is a selfish feeling — but we aren't alone."

And there have been positives along the way.

The trial has shown promise, for example.

"We feel like we have seen improvements. Not major, it is not like he is standing up again and running, like some people claim on the internet," she said. "But we do see the progression slow down."

The trials are finishing up in mid-June.

"It is a better result, but is not a cure, unfortunately," she said. Next, they want to try some private company drug trials, but they are costly.

Thus, there is a Go Fund Me campaign set up by Squamish a neighbour to help the couple access more options.

"We just have to keep looking," Hosoya said, adding her husband wants to help with the trials not just for himself, but so that eventually there will be a cure for ALS.

"We are still hopeful," she said. "We will still keep fighting."

More than 400 people in B.C. are living with ALS; over 3,000 in Canada, according to the ALS Society of British Columbia.