Eagle Festival includes presentations over the next three Sunday evenings
Jan 11, 2017 9:27 AM By: Michaela Garstin 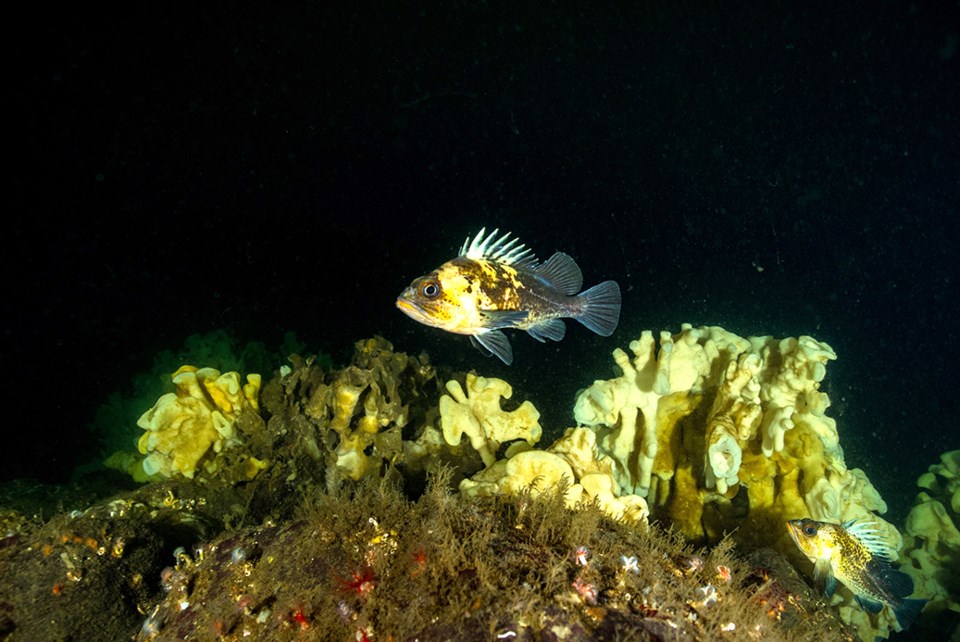 
It was an exciting day for local citizen scientists when the Department of Fisheries and Oceans went on an expedition to collect images from 12 newly-discovered glass sponge reefs in Howe Sound.

Using a remotely operated vehicle, the Phantom HD2, they took video and photos as arrow worms, shrimp and copepods zoomed by in the murky depths.

These deep-water creatures, however, paled in comparison to the white cloud sponges looming in view.

A long-armed squat lobster peeked out from the sponges and a quillback rockfish zoomed by as the scientists looked on over a period of four days in October.

In total, 18 glass sponge reefs have been discovered in Howe Sound, ranging from hundreds of square metres to acres in size.

Teaming with sea life, these reefs are a passion for Adam Thomas, a citizen scientist and scuba diver from Bowen Island, who will be giving a lecture as part of the 31st annual Brackendale Winter Eagle Festival & Count on Sunday, Jan. 15 at 7 p.m.

He worked with Glen Dennison, director of the Marine Life Sanctuary Society, as a volunteer with the society to help rediscover the glass sponge reefs that were once thought to have gone extinct 45 million years ago.

“Diving on these sponge reefs offered a glimpse of something unknown and hopefully positive.

I am hopeful they can act as sanctuary areas for some species of depleted rockfish stocks,” said Taylor, a citizen scientist. “... With firsthand observations, I note there are increased numbers of sub-adult and adult rockfish on these reefs. More than I have witnessed elsewhere in Howe Sound.

“The challenge is these reefs are extremely fragile. Any contact with fishing gear can damage and destroy the sponges.”

And on Jan. 29, Michael Allen, who has studied black bears in B.C. for 32 years, is showing highlights from remote cameras that followed a mother grizzly and her two yearlings as they fished for chum over 44 days along the Squamish and Elaho rivers last year.

“We have really interesting lectures this year that everyone should come out and see,” said Thor Froslev, owner of the Brackendale Art Gallery, who has worked to attract diverse speakers for the past 31 years.

For more on the Eagle Festival’s lineup of musical performances, art exhibits and other events, visit www.brackendaleartgallery.com/Festival.html.