Jeweller whose work appeared in Bates Motel moves to town

Many of her statement pieces feature small branches and gemstones
Nov 23, 2016 7:59 AM By: Steven Chua 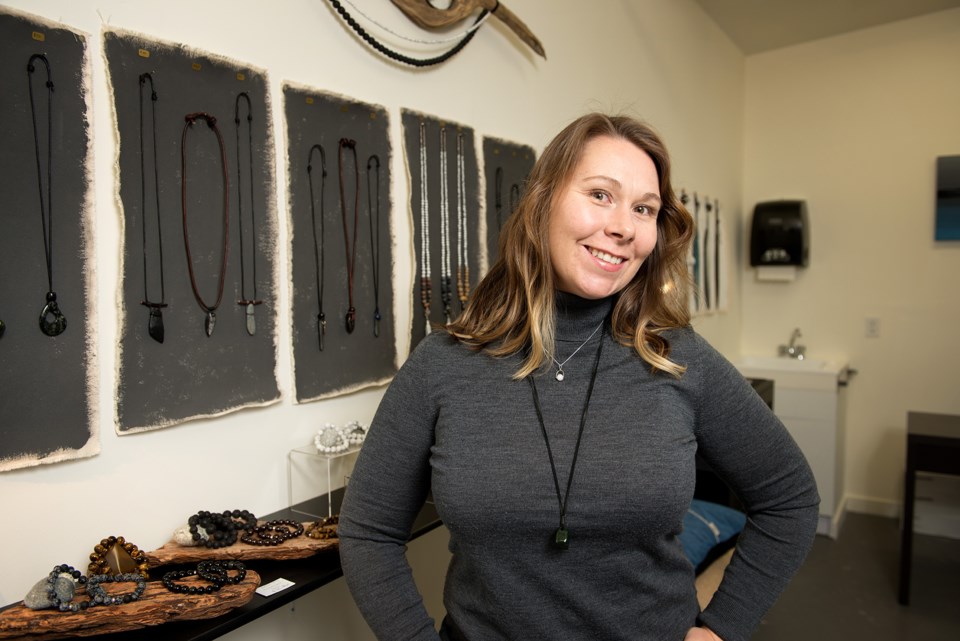 If you like jewelry and blockbuster TV, you’ll probably want to check out Scandinavia Wolf Designs, a boutique that has just moved into Squamish.

A necklace made by the business owner was worn by Ron Selmour, an actor playing the character of suspected gang affiliate Martin Epe in the TV series Minority Report. But that’s not the only TV show to feature Kristy Hansen’s necklaces – Ryan Hurst, the actor who plays the character of Chick in Bates Motel, will be wearing Hansen’s jewelry in the series’ upcoming season.

“I think it’s really exciting,” said Hansen. “It’s scary too, because you’re like ‘My stuff is getting out to the world,’ but at the same time you’re like ‘Wow, it’s good enough to make it on a show, and they’ve chosen my craft.’”

But you don’t have to be a star in order to look like one – you just need to go to the Squamish Town Hub (formerly On the Farm)where she transplanted her two-year-old business from Tsawwassen. Looking to reconnect with nature, the 37-year-old moved herself and her boutique to town in September.

The Nelson native said she felt life in the Vancouver area was too busy and thought Squamish would be a good place to start a family, so she also decided to bring along her business. Jewelry crafted by the Hansen is often produced from unlikely materials – twigs to be exact.

Many of Hansen’s pieces feature a branch and a gemstone, most of which she gathers locally. She often takes nature walks around town and collects wood that has an appealing shape.

Forested areas, mountains, beaches, lakes and rivers are some of her favourite spots. The gemstones she uses are either found on these walks or are ordered from suppliers in Vancouver, Toronto and, occasionally, California.

She chooses the type of stone depending on what properties she feels each piece of jewelry needs. For example, an amethyst is said to be beneficial to the mind while a lava stone is believed to offer protection and strength.

The end result is a unique take on jewelry which can often feature laser-cut wooden feathers alongside gemstones bound to painted branches.

“When I first find it, it’s usually something someone would walk over and not think about,” said Hansen of her foraging process. “I like to take something that’s raw, natural and fallen and give it life again.”

The idea came to the Hansen after her sister reminded her of her childhood fascination with rocks and twigs.

Hansen began rekindling that interest while combining it with insights she gleaned from studying fashion and interior design in school.

Furthermore, her inspiration also comes from life experiences. For example, her decision to incorporate fallen branches in her jewelry is a metaphor alluding to how a person could take a fall in their life and turn it into something positive.

Scandinavia Wolf Designs will be taking part in the Squamish Town Hub’s holiday market on Nov. 25 from 4 to 9 p.m.