Life of Chinese-Canadians in film 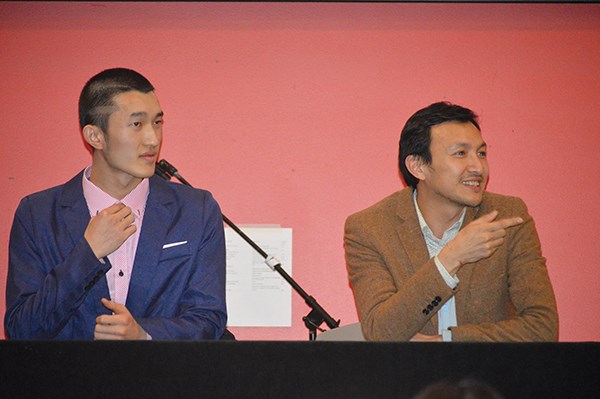 Like many Quest University students, Vic Wang comes from far away. He arrived in Canada from China to study at the university, which attracts students from around the world.

As a newcomer to the country, he has let his experience influence his education directly in the form of a documentary film that looks at the experiences of Chinese-Canadians and their lives in Vancouver.

Last Thursday night at Quest, he showed the product of his studies, a 40-minute film, Becoming Canadian – Journey of the ‘Chinaman, to fellow students and the general public.

The film opens with an overview of the history of Chinese people in B.C., which did not begin with the railroad, as many assume, but with the influx of people moving up from the U.S. for the gold rush.

Wang does touch on the history of migrant labour in building the railroad that connected B.C. with the rest of the country, including how Chinese workers were paid less than white workers and how many died while laying track.

The film also examines other important aspects of history such as the head tax imposition on Chinese immigrants and the eventual apology from the Canadian government.

Most of the film, though, is taken from interviews with Chinese-Canadians of different generations. Some were born here while others moved here, most arriving in Canada when they were young. He admits he would like to have expanded the range of backgrounds of his interview subjects.

The subjects, however, provide a range of views on everything from language, shows of wealth, assimilation, differences between men and women, cultural tensions, politics, education and the pace of life in Canada compared with China.

Toward the end, the film asks whether different cultures can coexist and even points to challenges surrounding new immigrants to Canada from other parts of the world.

As the credits rolled following the film, Wang received hearty applause from his audience.  “This is one of the greatest moments of my life,” he said.

Wang said he wanted to look at the issues from different vantage points, such as new versus old, Hong Kong versus China versus Taiwan, and Mandarin-speaking versus Cantonese.

“I want to present ideas that are not commonly seen,” he said.

With the help of his academic mentor Fei Shi, Wang has been working on the film as his keystone project at Quest since last fall.

“I started to brainstorm ideas and think about structure,” he said.

Wang is planning to keep this film as a student project only, although he will submit a copy to Quest’s library.

He wants to stay in Canada when he is finished school and hopes to continue working with filmmakers in Vancouver who are focused on cross-cultural issues. “There are a lot of stories we can develop,” he said.