Look out for the Western toad 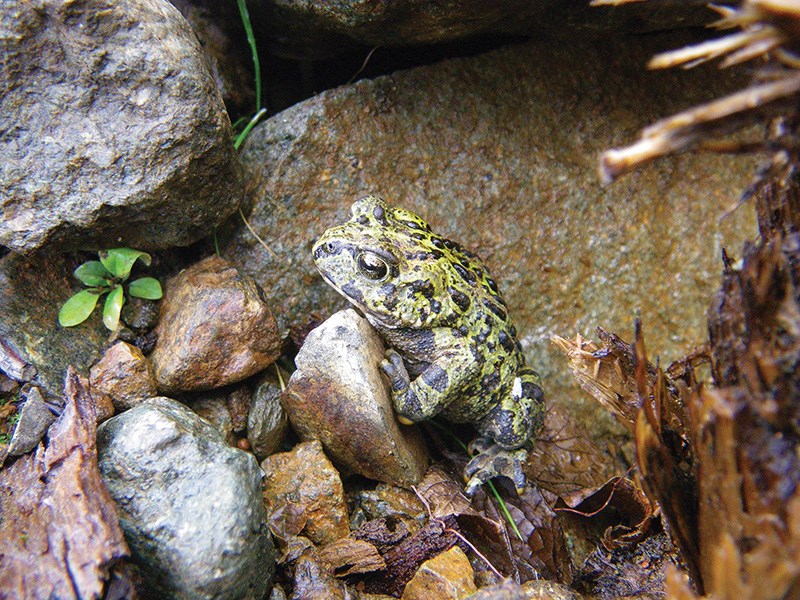 Ever look down while on a trail at Alice Lake and see a conga line of little toads travelling across the trail?

Quest University student Alicia Saunders is asking visitors to the popular provincial park to be on alert for the Western toad.

Saunders’ keystone university project is on the migration of the toads. She hopes her work will help protect the important species.

“The toads reproduce in mostly Edith and Fawn lakes, but then once they emerge from tadpoles into little toadlets… they all travel across the paths in the thousands to get to the forest where they are going to spend their adult lives,” Saunders told The Chief. “When they are doing this mass migration they aren’t seen [well] because they are tiny little brown things hopping across the path.”

Western toads are native to the Sea to Sky Corridor.

With the help of volunteers, Saunders is monitoring the toads as they metamorphose in the lake and then begin their travel into the forest. She wants to determine exactly where the toads are migrating, and for how long.

Typically, the once-a-year migration happens sometime between August and September.

The colourful Western toad is one of the biggest toads in the Squamish area.

“It fills up my hand,” Saunders said of the adult toad.

They are often brown but will have yellow toes or red spots; some are bright green and some are red on the back. Toads are different from frogs in that they have dry, bumpy or warty skin, while frogs usually have moist slimy skin.

Western toads are understudied, according to Saunders, and are an indicator class, meaning they are the canary in the coal mine for other species.

“They breathe through their skin so if there is any kind of toxins in their environment, they are the first ones to be affected,” she explained.

Once it is clear when and where the migration occurs, the public can be made aware.

“When it is happening we will likely have someone out there daily telling people about the toads, asking dogs to be on leash so they don’t eat them and asking people to walk their bikes and keep an eye out for them. If it is a big migration we may block off a section of the trail and reroute it,” Saunders said.

Anyone who spots a Western toad can alert Saunders through iNaturalist, a smartphone app. Users can take a photo of the toad and then uploaded it to Saunder’s Toadally Project on the app.
“And then I will be able to map the locations of where people are seeing toads in Alice Lake,” she said.

If the user isn’t sure it is the right amphibian, other users will help identify it, she added.

Saunders starts her fourth year at Quest in September and aims to become a biologist with a focus on wetlands.

“I think wetlands are super important to humans so I would love to work them into our development plans,” she said.

For more information on the Toadally Project, Saunders can be reached at leo.roxs@gmail.com.