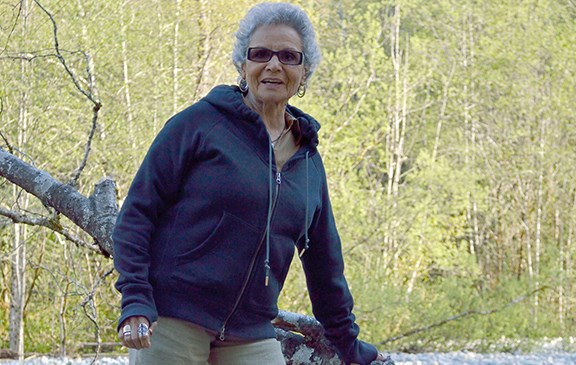 A woman renowned in Squamish for becoming a prolific marathon runner despite her later start in the sport has died.

Mabel ‘Mae’ Palm passed away on May 31, after having been diagnosed with lung cancer. She was 78 years old.

Palm made local headlines for her athletic endeavours. Her story was that of a late-blooming marathoner who, after having found her passion, quickly hit her stride.

She is also remembered for having a big heart.

“I could talk to her about anything, she was always there,” her daughter, Breanna Wilson, told The Chief. “Anytime I needed someone by my side, she would be there. She was just an amazing person.”

After having been inspired by Brackendale athlete Dag Aabye, Palm began running at the age of 37.

Initially, Palm’s goal was health and fitness, but her interest eventually blossomed into a burning passion.

By the time she ran her last race in 2008, Palm is believed to have run well over 100 marathons, a number of triathlons — including the Squamish Tri — 13 Iron Man competitions and several ultramarathons.

For context, last year’s Iron Man Whistler spanned 226 kilometres, which is comparable to the road distance spanning from Vancouver to Lillooet — about 250 kilometres.

But while Palm is perhaps best known locally as an accomplished athlete, her daughter remembers her mom as a “best friend.”

“She was an amazing mother and she was one of the best friends I will ever have in my life,” said Wilson. “She was a true inspiration to all of us.”

One memory that stands out for Wilson is when she and her mother visited South Africa to see the house Palm grew up in.

It was an eye-opening experience for Wilson.

“How different our youths were,” she remarked. “We had two different worlds growing up.”

Palm grew up as a person of mixed ancestry in South Africa during apartheid. Under that regime, she was labelled “coloured,” or “mixed.” Considered neither white nor black, she had more privileges than the black population, but she did not have the same rights as a white person.

Wilson remembers her mother mentioning some of the challenges growing up in that system.

“It was awful — there was a lot of other children teasing,” she said. “I can’t imagine how many horrible things probably happened in her childhood but, you know, just being put down because of their colour.”

By the time she was 16, Palm’s mother had saved up enough cash to send her to England in hopes of giving her a better life.

Palm was given enough money to survive for a week in the new country, and from then on she had to fend for herself.

After about a decade, Palm then moved to Canada.

She met her husband James Wilson on Vancouver Island and wound up moving to Squamish in the late 1970s as James pursued opportunities in the logging industry. Along the way, she had her two children, Breanna and Brendan Wilson.

Brendan remembers his mother as being someone who was full of life, regardless of her age.

One such occasion, he said, is when the family was out boating.

Once the boat was far out in the water, Brendan’s son decided that he’d like to take a swim — something which the family previously hadn’t planned on doing.

But Palm was more than happy to oblige her grandson. Palm, at the time 77 years old, showed she wasn’t afraid to jump in the ice-cold water and have a great time.

“She was still loving life and not ready to say, ‘I’m too old to do that.’” he said.

It’s this love of life that Brendan says is one of the standout qualities — among many — that his mother had.

Another quality, he said, was her willingness to help.

Brendan also added that he would like to thank the town for its support.

“We definitely haven't felt alone in this,” he said. “We’ve received incredible support and comfort from the local community.”

“It just really shows how widely loved she was,” Brendan said.

Palm’s funeral is scheduled for June 23 at 10 a.m. It will take place at the Squamish Funeral Home on Tantalus Way.