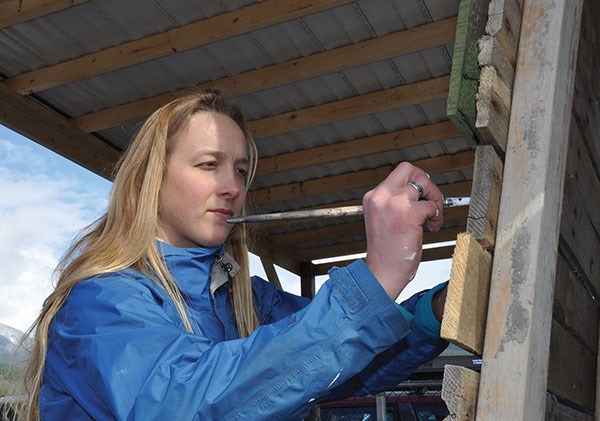 Neder Grantham-Segal and Kendra Perrin are using hammers and crowbars to dismantle wooden shipping pallets in a backroom at Squamish ReBuild. At first glance, the connection between the sliver-inducing labour and a course on Democracy and Justice at Quest University Canada may seem tangential at best.

But the students insist they’re fully on board with a new partnership that links the postsecondary institution’s students with hands-on volunteer work provided by Squamish community-based organizations such as Squamish ReBuild. The non-profit society’s aim is to be self-sustaining through the sale of recycled and “upcycled” former building materials that might previously have wound up in the landfill.

Grantham-Segal and Perrin, in fact, said tearing apart pallets and some of the concepts they’ve been examining during tutor Eric Gorham’s Democracy and Justice class are a perfect fit.

“I think a lot of the time when we speak about societies in a classroom, it seems very practical and philosophical,” said Perrin, from North Vancouver. “The idea behind ‘service learning’ is that it helps you connect with real, on-the-ground challenges.”

Grantham-Segal, who hails from northern California, said he appreciates the chance to connect with the likes of Squamish ReBuild, part of whose mission is to promote social justice through the creation of lasting partnerships.

“There are a lot of young people who love helping out, and this is about creating those opportunities and those connections,” he said.

Inis LeBlanc, the store’s general manager, said that since Quest students began coming last November, she has been able to assign them to help some of the projects — such as turning shipping pallets into plant boxes and the like — that are often overlooked in the facility’s day-to-day operations.

In return, students get a glimpse of what an organization that promotes environmental awareness through the productive use of discarded materials works.

“Part of our mission is to collaborate with other organizations to create these kinds of partnerships,” LeBlanc said. “So much can be done when you’re working together.”
Gorham said Luce Mélançon, an educational consultant for Quest, first put him in touch with LeBlanc about a potential partnership. Gorham had been looking to include a “service learning” component in his classes, and Squamish ReBuild seemed like the perfect match.

“Democracy and Justice helps students learn about principles and theories of governance and socioeconomic distribution,” Gorham wrote in an email. “I use the service-learning component to help them implement some of their ideas into practice and to see how political and economic activities reflect some of the ideas in the course.

“ReBuild is directly concerned with environmental justice — a key branch of distributive justice. At the end of the course, students develop their own Quest organization related to their service work,” he said, adding that Quest’s current student government model grew out of his Democracy and Justice class.

Gorham said he’s also looking to partner with other community organizations in the future.

Madeleine Kunda, a second-year Quest student from Pennsylvania, said as she hand-painted a Squamish ReBuild sign to make it more visible from Highway 99 that she has enjoyed the “hands-on” approach to learning.

“I jumped at the opportunity because I heard it was hands on and Inis is an entrepreneur. I have a real interest in that,” Kunda said. “I couldn’t pass on it because it’s a chance to get off campus and parallel what we’re doing in class.”

LeBlanc said she first had the idea of connecting with Quest when she met Mélançon at a Squamish Rotary meeting.

“I was wanting to create more opportunities for more people to get involved in the success of Squamish ReBuild,” she said. “People are very supportive of the idea of recycling building materials — wanting to recycle, purchasing items made from recycled materials — but I wanted to take it to another level.

Added LeBlanc, “It’s a social enterprise, and I think it’s the future of doing business because it’s showing people that it’s possible to run a business and do good things for the planet and for our communities.”