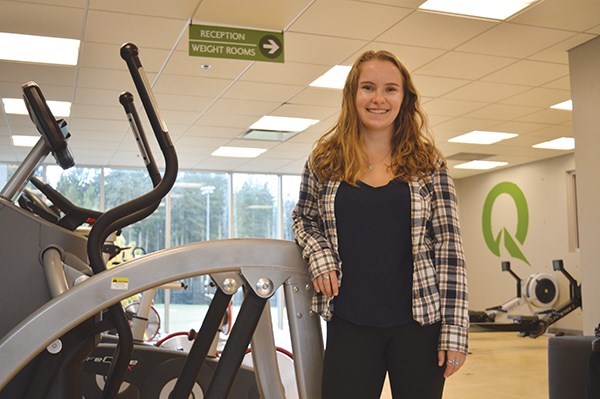 Before she’s finished her studies, Quest student Janali Gustafson is trying to determine whether mind can influence body in athletics.

She has been conducting research into power poses – standing in a position of confidence – and how this might affect levels of testosterone and cortisol.

At least that is the question she is asking for her keystone project at the university. It is specifically around how people can push their limits physically.

Now in her fourth year, she grew up in New Mexico and was looking at liberal arts schools around the U.S. when she heard about Quest University.

“I came to visit and just fell in love when I got here,” she said.

As to the subject of power poses for her research, she heard about the idea from a TED Talk when she was in high school

More recently, power poses have been the subject of other studies.

“This is a pretty hot topic at the moment,” she said. “It’s in this period where we don’t really know what these poses do.”

She felt there was something missing from the conversation around links between power poses and athletic performance.

In the summer, as part of a fellowship program at the university, she conducted research on 20 people, including athletes from the university and people from the wider Squamish community.

“We were so excited to get Squamish participants,” she said.

The participants took part in three sessions, which included opportunities to do what would be considered “high” or “low” power poses.

To measure the effect, the participants gave a saliva sample that would provide information on their hormone levels.

“It’s way simpler than getting blood,” she said.

This information is being measured against data from questionnaires the participants filled out to gauge their sense of confidence of anxiety.

To see the effects, they also perform tasks in areas such as balance, reaction time, vertical jumps, hand strength and endurance.

“This was meant to give us a full picture,” Gustafson said.

The fellowship program let her get more done on her keystone project.

She is still working on analyzing the data with advisors Meaghan MacNutt from physiology and I-Chant Chiang from psychology to make sure they have not missed anything.

“We really need both their expertise to make sure we got both sides of the equation,” she said.

They are also making sure the methodology from the study has been sound.

“We’re hoping to eventually get this published,” she said.

Down the road, she wants to become a physiotherapist and is looking into applying to graduate schools.

As to what the study will yield, Gustafson is not yet sure.

“There are so many mind-body interactions that we don’t understand fully at this point,” she said.