Local mother shares her family’s adoption story
May 4, 2016 11:04 AM By: Jennifer Thuncher 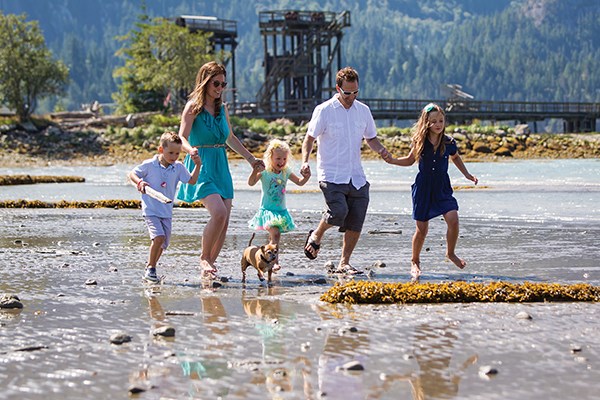 Adoption was the best way for Alicia Marreiros’s family to grow in love and number, the Squamish mother says.

About 645 children who were in government care in B.C. found their forever family over the past two years, according to the Ministry of Children and Family Development.

Marreiros’s five-year-old daughter, Bri, was one of those children. Marreiros and her husband, George, adopted Bri a little over a year ago.

“Bri found us. It’s that simple,” Marreiros said, of her youngest daughter.

The couple already had two healthy birth children, now nine-year-old Ciahni and six-year-old Kade, when they decided to expand their family.

Adopting was something Marreiros had wanted to do since she learned her own mother had been adopted. “When I was young, about eight years old, we met my mom’s biological family… and that was really meaningful for me,” she said. “I became incredibly intrigued with the entire process of adoption.”

When she first heard about Bri, she knew the four-year-old girl with blonde curls was the second daughter she was meant to have. “All along I ‘felt’ there was a four-year-old girl out there waiting to be ours,” she said. “The first call we received regarding a possible match…  our social worker said, ‘Alicia, I think I have your kid. She is cute as a button, and she would be four shortly after placement.’ At that moment I knew. I started to cry, and I knew.”

Like any major change, adoption has meant growing pains for the family, Marreiros acknowledged. Because her daughter had been in foster care until her placement, she had trauma, loss and attachment issues the family has had to work through, she said. But after the first year together, everyone is settling in.

Marreiros said misconceptions about adoption abound. Children who are waiting to be adopted aren’t “trouble makers,” she said. Every child just wants to be loved and to belong.

“Children yearn to be cherished by loved ones and there is just something about what happens when a child is ‘claimed.’ Their growth and development shoots up in a way that shocks those around them, in a positive way. It’s amazing to see,” she said.

Older children waiting to be adopted need to find love and permanency too, she stressed. “Kids need parents to love them and guide them even after they turn 18 and become adults.”

For those wanting to adopt, a few routes exist: adoption through the Ministry of Children and Family Development, which means adopting a child who is in foster care, as Marreiros and her husband did; or through one of the four licensed adoption agencies in B.C., which facilitate both local and international adoptions.

The ministry is a quicker route, according to Karen Madeiros, executive director of the Adoptive Families Association of BC.

“The wait for [international] adoptions can be incredibly, incredibly long,” she said.

Adopting an older child is far more likely than adopting an infant, she said.

While private agencies can be costly, going through the ministry is essentially free, according to Marreiros. And perfection is not what social workers seek when evaluating a family’s eligibility for adoption, she said.

Anyone over 19 who can provide a loving home may be eligible to adopt, the ministry confirmed.

Although the family doesn’t have contact with Bri’s birth family, Marreiros recently sent a letter and a photo album to the adoption agency to be passed on to the birth grandparents and other relatives.

Openness between the child and her birth family is far more common than in past decades, according to Madeiros.

“I would say every adoptive family has to be prepared now that there’s going to be openness,” Madeiros said. “While families may not be having a lot of openness, say, with birth parents… it can be often with aunties, grandparents – it can be with other adoptive families that are parenting siblings of that adopted child.”

Marreiros said she considers herself an advocate for adoption and hopes it becomes more openly discussed.

Adoption isn’t for everyone, Marreiros said, but she added it’s hard for her to understand why other potential parents wouldn’t want to do it.

About 850 children are currently waiting for a forever family in B.C., according to Madeiros. To learn more about adoption, go to the Adoptive Families Association of BC website at www.bcadoption.com.