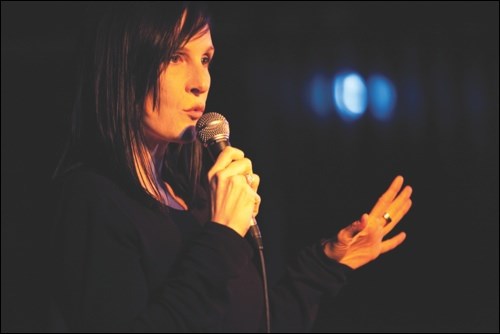 Squamish’s Monique Hurteau, who has several careers on the go at all times. She also happens to be the partner in crime of Corner Gas star, Lorne Cardinal.Benjamin Luk Photography

Squamish’s Monique Hurteau has a lot in common with a hummingbird.

The bird, like the woman, seems from a distance to be flitting randomly from task to task, but on closer inspection, each move is purposeful and interconnected.

Hurteau, who happens to be life partner to Corner Gas TV star Lorne Cardinal – clearly the bird metaphor can work in more ways than one – has a masters degree in business with a specialty in management consulting, is a comedienne, a strategic planner, a documentary producer, a TV script writer and an artist, to name just some of her current occupations.

Each different role she plays works with or helps the other, she said. “It is a duality,” she said. The hard-core, intense business side of her needs the artistic outlet and visa versa, she said.

“I get bored easily too, so I need these things to keep me engaged and interested,” she said, when she spoke to The Squamish Chief before heading out for a walk in the rain with Cardinal and their dog, Jake.

Her watercolour artwork is what has been taking up most of her time lately, she said. She has gallery representation in Winnipeg, “but [each painting] has been selling before it makes it out to the gallery – not complaining,” she said of her sometimes abstract and sometimes colourful canvasses.

For much of her early adult life, Hurteau worked in her family’s land titles business but during a two-week holiday taken after going seven years straight without a break, she realized she had to change. “I just thought, this is not right to live this way,” she said. “It altered me in ways I couldn’t go back.”

That is when she started exploring different facets of herself.

“I made these shifts of trying things that had always interested me,” she said.

Her new adventurous spirit led her to comedy, which led to the Humour For Health workshops that she still offers to help people add humour and therefore better health to their lives.

Her transformation to Renaissance woman also led to Cardinal, who she met while at a comedy event on Commercial Drive in Vancouver.

Soon they were doing the workshops together.

“I said, ‘I will handle all the logistics, you just need to be there and more than just be my Vanna White, not just my man candy,’” she said.

Being coupled to an actor known for his comedy, it is not surprising that Hurteau has great comedic sensibilities herself, peppering her stories with the right combination of self depreciation and insight. She has used her sense of humour to overcome challenges she has faced including three serious car accidents – each a rear-ender.

“It is great fodder for standup,” she said with a hearty laugh. “One [accident] was in Prince George, I got rear-ended by a guy named Lucky.”

The second serious accident ended tragically with the man who hit her vehicle dying from his injuries.

“That was really traumatic,” she said.

Her knack for comedy helps balance the pain of life, she said.

“I feel sometimes like if I didn’t have that, I probably might not even be here,” she said. “If you use your powers for evil and not for that good then you can end up sending yourself off in a ditch.”

Even though she is clearly a multifaceted talent in her own right, Hurteau never minds the attention her famous partner attracts, she said.

“I am used to kind of being in the back a bit more,” she said. “We’ll do a workshop or do something and I have learned now to go stand off to the side, because everyone wants Davis [Cardinal’s Corner Gas character] and I am great with that, because I see how happy his roles have made people.”

The couple also collaborated on a documentary, Chasing Lear that she produced and that will be airing on APTN in September.

The labour of love project is about an all First Nations production of the Shakespeare classic that took 40 years to come to a stage.

For more on Hurteau go to, www.moniquehurteau.com.