Vikki Weldon will speak about the importance of mentorship
Feb 26, 2015 12:11 PM By: Jennifer Thuncher 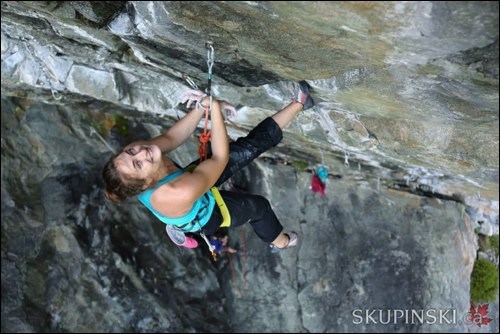 Vikki Weldon doing what she loves best, climbing. Weldon will be a featured speaker at the March 4 Feat Canada event.Submitted photo

Rock climber Vikki Weldon is only 26 and already a titan of her sport.

Redpoint means a successful ascent of a route with no falls or illegal rests. 5.14a is the route difficulty, 5.15c.is the most difficult route in the world.

Weldon, who is sponsored by some of the biggest names in climbing such as Arc'teryx and Five Ten, works as a pediatric nurse when she isn’t climbing.

She attributes her success to the many mentors she has had along the way.

Her recent trip to Morocco is an example of the role mentorship has played in her life. On that trip in November, she put up a first ascent, meaning she mapped out an original climbing route.

“It was something that was totally outside my comfort zone, and I found someone who is keen on teaching me and I went for it, and that is what I think people should not be afraid to do,” she said.

Before the trip, Weldon said, she had never even drilled a bolt, but with the guidance of Squamish climber Paul McSorley she was able to create the whole route.

“Paul basically taught me how to do everything on the fly, and it was a really good learning experience,” Weldon said, adding it is her proudest accomplishment of her career so far.

“It is something that was really outside my comfort zone.”

They called the route Zahir, an Islamic term Weldon said translates to a thing or a person one becomes obsessed over.

“In our opinion, we put up an amazing route. It is really fun and a great location,” she said.  “I really hope people will climb it.”

Weldon has been climbing for almost as long as she has been walking, having grown up with climbers, and credits them with inspiring and guiding her.

“My parents climbed and they have been mentors for me, pushing me to really do what I want to do and supporting me in that,” she said. “I have three siblings, they all climb, and they have been role models for me and influenced me.”

Coaches and friends were also invaluable sources of support, she said.

“Every step of the way, there is someone there to look up to and provide inspiration for you to keep pushing yourself,” said Weldon.

With her success and exposure Weldon has become a mentor and inspiration to others, a role that she isn’t quite used to.

“It definitely feels weird,” she said. “I find other people inspirational, I don’t really think of myself as inspirational, but I think it is kind of cool.”

It is Weldon’s belief in mentorship and humble nature that makes her a perfect speaker for the upcoming Fascinating Expedition and Adventure Talks (FEAT), according to organizers.

"Vikki is really down to earth and a great person to talk to. She has a good self-understanding, and that's one of the most important things someone can have if they're going to be a leader,” said Sean Verret, founder of the talks.

Weldon will be speaking at FEAT Canada on March 4 at Centennial Theatre located at 2300 Lonsdale Avenue, North Vancouver. For more information, go to www.featcanada.ca.

Want to help bring joy to Squamish Elders and seniors who are homebound?
Apr 15, 2021 1:58 PM
Comments