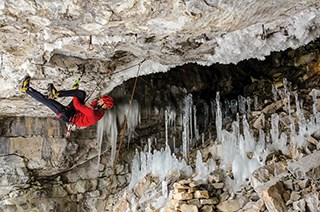 June 12 started out just another summer day climbing at Smoke Bluffs Park for Alberta native Josh Pelland. As he had done the previous two summers, Pelland, a self-described dirtbag climber, was spending his days gripping rock and his nights living in his truck. But on June 12 something went wrong and Pelland fell about 20 metres.

“I was just out practicing rope-rescue by myself… problem solving and I guess having a bit of a training day,” he said. “I was… jugging up a fixed line that I put in place. I remember being about five feet from my anchor, within arms reach of my anchor and that is all I remember.”

Pelland said he hasn’t seen his equipment yet so doesn’t know if human error or equipment failure is responsible for the accident.

“I don’t remember popping off the rope or the rope snapping or anything. I just remember waking up in the hospital.”

Since the accident he’s learned he landed on his right side and hit his head – which caused bleeding on his brain – smashed up his legs, and broke his back.

“My injury is in my thoracic spine – T7 complete is what they call it,” Pelland said.

He is paralyzed from the waist down.

Pelland,31, was rescued by Squamish Fire Rescue and BC Ambulance Service and transferred to Vancouver General Hospital. He was in and out of consciousness for a few days, he said, but remembers the arrival of family members who rushed to his hospital bed from Alberta.

He underwent heart surgery, orthopaedic surgery and two operations on his legs.

After a month in Vancouver he was transferred to Calgary.

“I am doing pretty good,” he said late last week from Foothills Medical Centre where he will remain for about another month.

He is already keeping physically active and has a positive attitude about his situation.

“I just got to get on with it and start. I got to do it sometime so I might as well do it right away,” he said.

He’s grateful his cognitive function wasn’t impacted, he said, and his upper body is strong. He will be able to live a fully independent life.

“I have already joined a hand-bike club and have been rippin around the streets of Calgary after my daily dose of therapy.”

Pelland, a construction worker and labourer by trade, started climbing about 15 years ago and is already thinking of ways he can continue with the sport he loves.

“I would love to get someone to put a fixed line in and I would just jug up it and hang in space,” he said.

Brad Zdanivsky has done what Pelland wants to. Zdanivsky became the first quadriplegic athlete to climb the Stawamus Chief in 2005.

Because, unlike Zdanivsky’s case, Pelland’s heart rate and blood pressure regulation are not impacted by his injuries (both are impacted for most who are quadriplegic), getting back into climbing shouldn’t be too difficult, Zdanivsky said.

“The equipment changes for him are pretty straight forward,” said Zdanivsky. “All that core strength is still there.”

Pelland said he is open to coming back to Squamish.

“All my memories have been just awesome,” he said. “Just the greatest memories of my summers being there and the friends I made and the climbing partners I climbed with. And cruising up from awesome big walls, having a big explore out there. No hard feelings and no bad memories at all.”

He wants to thank Squamish rescue services who attended to him when he fell.