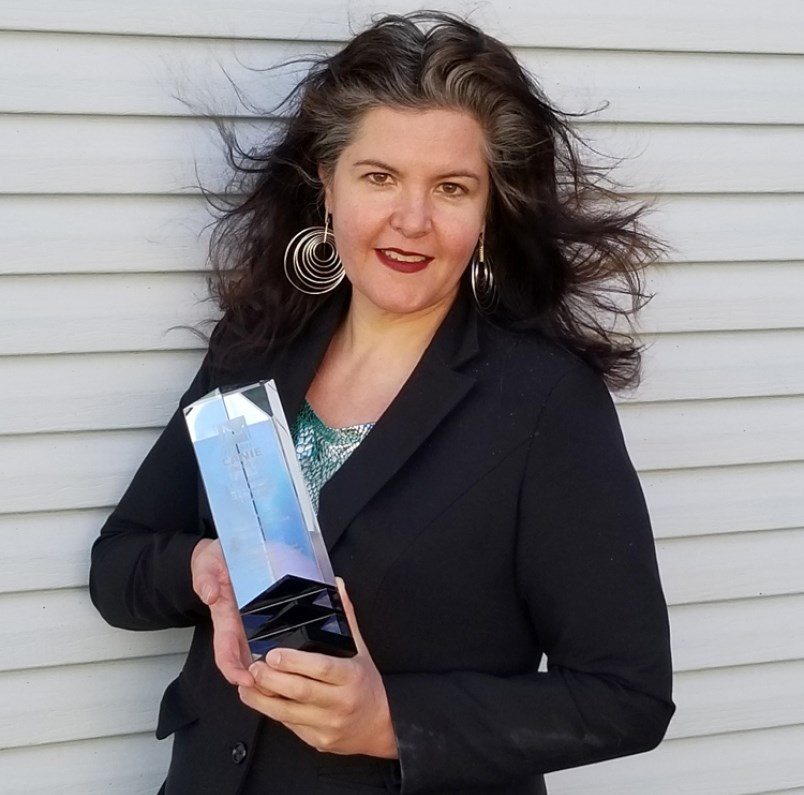 Kelly Ann Woods with her award.Melissa Steacy of State B Beverage Company

Kelly Ann Woods is going to need to expand her trophy case soon.

The Gillespie's Fine Spirits founder took home her third major award in recent months when she was honoured with the CANIE Woman Entrepreneur Award for British Columbia, presented during a digital event by Startup Canada's Innovators and Entrepreneurs Foundation on June 4.

In a June 6 interview, Woods acknowledged that while thrilled to be recognized, she wasn't exactly sure of what put her over the top.

"I have no idea. I always wonder," she said with a laugh. "I always think, 'Wow, this is pretty prestigious and I'm sure you had a lot of people nominated.'

"I just look at it and know I'm doing something right and I should keep going and [wonder] 'What else can I do?' and you make sure that whatever you're doing, you use that power for good, not evil."

Woods also received the Diversity Institute / Women Entrepreneurship Knowledge Hub Micro-Business Award at the RBC Canadian Women Entrepreneur Awards in November and was honoured in the Community Builder category in the inaugural BC Business Women of the Year Awards in April.

"In each of them, I was nominated by an incredible person that I deeply admire. It's the whole process of winning an award that's incredible when you get nominated by someone you have deep respect for," she said.

Woods explained that each nomination has kick-started a fulfilling process of soul searching when she ponders her accomplishments during an interview or while filling out a questionnaire.

"As women, and especially as businesswomen, we don't value our contributions as much as perhaps we should, so it's been this exercise for me to really look at what I've done, look at what my day-to-day is, look at how I contribute and look at why I should win an award," she said. "We have less inclination to take up space than our male counterparts in the business world. I don't want to make generalizations, but that seems to be par for the course as far as one of the variations.

"It's been an incredible thing to be able to look at things and take up some space."

Though two of the three events were held virtually, Woods appreciates the opportunity to interact with other strong and accomplished women and realize the similar mindsets they possess.

"You get together with these people and you realize we are all wanting change. We are all wanting growth and development," she said. "Being put in the position with these other women where you can come forward and say, 'Actually, we want these things to change,' and have a unified voice is pretty exciting."

The ongoing COVID-19 pandemic has wreaked change but created opportunity within business for Woods.

A major arm of the Gillespie's organization, its G Spot lounge, has been closed with no set plans to reopen soon because it is "such an intimate environment" and difficult to maintain physical distancing. With the hospitality industry facing what is likely a lasting overhaul, the ability to adapt is paramount and Gillespie's has made some alterations to keep up, including filling the hand sanitizer void when commercial options were few and far between. More recently, Gillespie's pivoted to increasing its online presence, making cocktail kits available for purchase, complete with an instructional YouTube video starring Woods.

It hasn't been as easy as one might think for Gillespie's to capitalize on the increase in alcohol consumption during the pandemic, as Woods said while people are drinking more, it's mainly cheaper beverages as a means of escape.

"People are drinking to dull the experience as opposed to drinking a lot of premium products," she said.

"It's not about dulling an experience, but really focusing on the enjoyment of one."

She also points to the non-alcoholic Boozewitch line, which is made up of flavourful mixers to help create mocktails.

Next up will be the launch of the State B line of cannabis drinks, which Woods said will be especially relevant as, with an increased focus on respiratory health, people move away from smoking and vaping.

"To be able to take my knowledge of beverage and apply it to this burgeoning industry is wildly exciting," she said. "It's an operation that I hope brings so much joy and wellness to people."

Woods is unsure of a launch date at this point, noting her expected range at the moment falls between August and January.