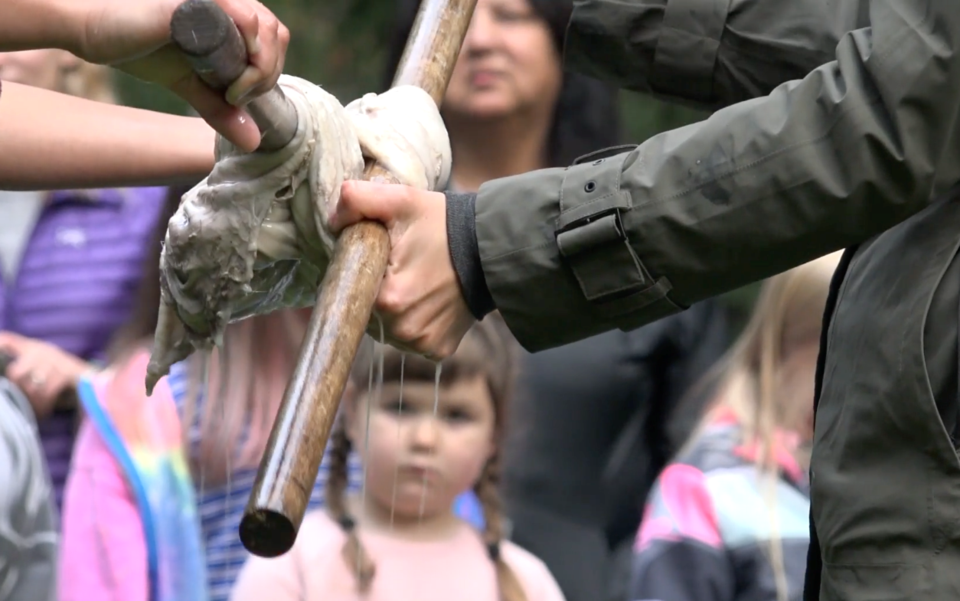 "Why do you like being out in the woods?" a young camera operator asks a fellow student who is sitting atop a log in the forest above Alice Lake.

"I don't know. I like it. I feel like a wolf in the forest," the girl answers.

The scene is from a Squamish Nation Education Department video posted to its Facebook page.

Students from the school attend the camp each fall. It is held at the Ni'nich St'ena'tch (meaning deer hunting grounds) longhouse, which is tucked on a forested road at Alice Lake Provincial Park.

It is a day of learning traditional Sḵwx̱wú7mesh skills and centuries-old practice.


Sea to Sky school district Indigenous culture and language worker Charlene Williams guides the students through the cultural values of the process.

The four deer hides the students helped tan this year were gifted to the program from different hunters in the community, she said.

The skill was lost to several generations of Squamish people, but is being revived through programs like this.

"I never had a chance to do the deer hide tanning, neither did my mother and as far as I know, my grandfather on my mother's side didn't either," Williams said, adding that her grandfather on her father's side may have known how to do it because there is a little jacket that was passed down.

She first learned in preparation for teaching the students, several years ago.

The process starts a week before the camp. The hides are soaked in a mixture of water and lime.

The students can then scrape the fur off the hide. Next, it has to be neutralized again in a rinse of vinegar.

Two of the hides were later made into drums.

The other two were made into leather.

For those, the hides had to be rubbed with animal brains — traditionally deer brains, but for the class, food-grade pig brains were used.

"It is a really interesting chemistry," Williams said.

"There's a funny fact that each animal has enough brains in its head to tan its own hide," she said.

The older youth in the video have attended the camp for three years, so they were quite comfortable with the process, but the first year, there was some trepidation about the work.

"There were some kids who didn't want to scrape at all," she said. "But the brains — even though they were super grossed out about it — everyone wanted to do it, and it was the most exciting part about it," she said.

The hide is then worked and worked to become the leather.

It has to get stretched and pulled and rubbed with a pumice stone to remove the rough bits.

"Our school is a little different. We are very much hands-on," Williams said, explaining the kids' comfort level with the work.

"We talk a lot about hunting and gathering from the land, and they go out and they see the fish getting caught and cleaned... it is not that new," she said.

It is an amazing learning process for them all, she said, noting that the students have been able to make drums since the school started six years ago, but being able to participate in the process from the deer hide to the completed drum was special.

"Being able to know the process of being able to make the hide right from the hair on it to smoking it and tanning it and then making their own gifts," she said.

For the last two years of the camp, the students made the hides into medicine bags they gifted to family and community members at the winter potlatch.

The two drums made from the hide at the camp were gifted to both a representative from BC Parks and one to botanist Leigh Joseph who worked with Aya7ayulh Chet (Cultural Journeys) and other community members to create a trail at Alice Lake. with signage that shares traditional medicinal plant knowledge.

The 250-metre Story Trail was completed last winter through a partnership between Joseph, the school, BC Parks and the BC Parks Foundation, and the Squamish Nation Education Department.

"Leigh came and she told the children about the plants and then we had a planting day where we got to do a whole bunch of planting, near the longhouse and on that trail area," Williams recalled. The QR codes on the signs lead to audio of the students sharing cultural knowledge.

"Teaching traditional knowledge of ways we carry ourselves when we are working with plants," she said.

Over the last few years there's been an increasingly close relationship between the school and BC Parks, but the first big project they worked on.

Reflecting on all the students learned through both these projects, Williams said while the students may not know it now, they are lucky to be exposed to all these traditional Squamish teachings.

"This knowledge that they are growing up with is knowledge that I didn't get to learn until my teens and my adult years — how to weave with cedar, how to harvest deer, how to tan hides — they are so blessed to be able to learn... It is part of their everyday life at our school."