Wine with a song 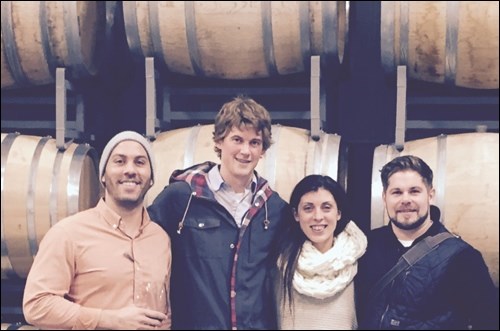 When you think about music, do you think of wine?

A group of Squamish entrepreneurs are betting the success of their new business venture on the pairing of wine with songs.

And they are launching their wine label just in time for the Squamish Valley Music Festival.

“We just really noticed that there was a correlation between people drinking wine and listening to music, and basically we thought there should be an independent wine like there is independent music,” said King, a private chef who has been in Squamish for eight years.

The wine itself is made in Prosser, Washington.

The Squamish friends are introducing two wine blends to start: one white and one red.

“As the sun goes down, you want to drink a red, and during the day, a nice crisp white,” said King.

The 2014 Tour White is a blend of pinot gris, riesling and gewurztraminer, which King said creates notes of bright citrus and tropical fruit, with a touch of minerality. (To wine experts, this means the smell or taste of wet stones or crushed rock.) The second wine is the 2013 Tour Red and is a blend of syrah, grenache and mourvedre, which creates notes of dark berries, white pepper and vanilla, according to King.

The wines are aimed at music lovers between 28 and 38 years old. “Festival goers and wine lovers,” King said.

There is both a sense of a hometown advantage and of nervousness launching the wines in Squamish, King acknowledged.

“The advantage is you find a lot of people who are interested in trying it and get behind the story, and the challenge is you just hope people that are your friends like it.”

The wine will be on the shelves at local liquor stores this week.

The ultimate plan, King said, is to sell the wine in B.C., Alberta and Washington.