Mike Alexander never got to meet his biological grandmothers, but the latest project he is working on is allowing him to ask himself some deep, philosophical questions of identity and then share them with the world.

An Anishinaabe Sixties Scoop survivor from Swan Lake First Nation in Treaty 1 territory, Man., Alexander began his journey into art at the age of 40. Fast forward, he is now an artist-in-residence at Skwachàys Lodge, an Indigenous social enterprise that combines a hotel with an art gallery that supports on-site housing and studio space for 24 Indigenous artists in Vancouver.

The residency, which he began in January, has opened a multitude of doors for Alexander – he is currently working on no less than seven projects for upcoming exhibitions and events.

“I've wanted this since I quit my job and started being an artist full time. Because of commitment and determination, [I am] starting to realize that if you want something, you can have it. Just be careful that you ask only for the things that you're willing to receive, which in this case is a lot,” he said laughing.

“It’s a lot. And I don't take it lightly. I want to do it really well; I want to do it the best of my abilities. So to have the time and space and the support to do it, that's the phenomenal part.” 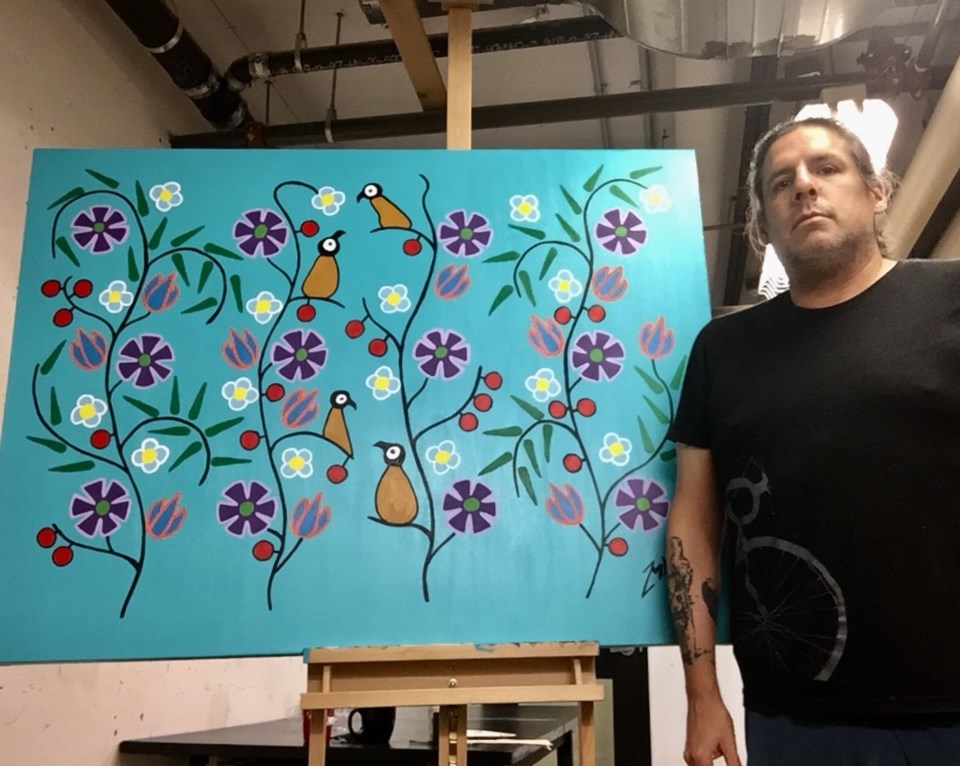 One of these projects that has come to Alexander is Honouring our Grandmothers Healing Journey. The three-year long project, which started in 2021 by Further We Rise and Sacred Rock, is a travelling exhibition of message chests and bentwood boxes that symbolize the “grandmothers who travelled to the Downtown Eastside; grandmas who’ve passed on; and grandmas who are with us now and their life stories.”

There will be one "elements" message chest which will include artwork of differing nationalities connected to Indigenous peoples historically of the DTES.

Meeting with Nadine Spence, a Nlakapamux First Nation artist and founder, producer and director of Honouring our Grandmothers, Alexander was invited to participate.

No two people’s relationships with their grandmother’s are the same, Alexander explained. While all special, each is unique.

“I never knew my grandmothers, either of them, because of what happened when I grew up in Winnipeg. So, the fact that there's an absence, that is an experience in itself,” he said. “And how I am dealing with that in life, as an artist and as a man, as a father, as a grandson, as a son, like, as everything. What does that look like? What does that mean? Where have I come from? Why am I here? You know, some of these philosophical sorts of things that I've carried all my life, this is an opportunity for me to share some of that stuff.”

Reconnecting with biological family about three years ago, Alexander said until then, he lived his life with a denial or a belief that colonization hadn’t affected him. Being afraid of what he would find if he had reached out, Alexander said he eventually took the risk, and his community has since embraced him.

“My community responded to me and said, ‘We think we know who you are.’ The post adoption registry confirmed it. And suddenly, I've got family. Suddenly, I've got parents, I've got grandparents. And it's the happiest day of my life, but it's also a point where I start grieving in a way that I've never been able to grieve before, for the loss of these people who only exist as photographs to me.

“And there's something tremendously important there, that I think drew me into this whole piece about grandparents.”

At a retrospective of famed Ojibwe artist Daphne Odjig, Alexander said he had a realization that someone like Odjig could have been his grandmother and could have taught him how to paint.

“That connection with the art absolutely broke my heart. I'm standing in the Kelowna Art Gallery, just bawling my eyes out. And I'm not sure if it's happiness or sadness. but it's this realization that I belong to something that's really important,” he explained. “Her paintings were medicine for me to find. She painted those with me in mind, I know it. I felt that she was there saying ‘welcome home.’

“That's what inspires me to sort of tell the stories that I do through art, you know. I need to share this; I need to know that I'm not the only one that’s finding ways to heal.” 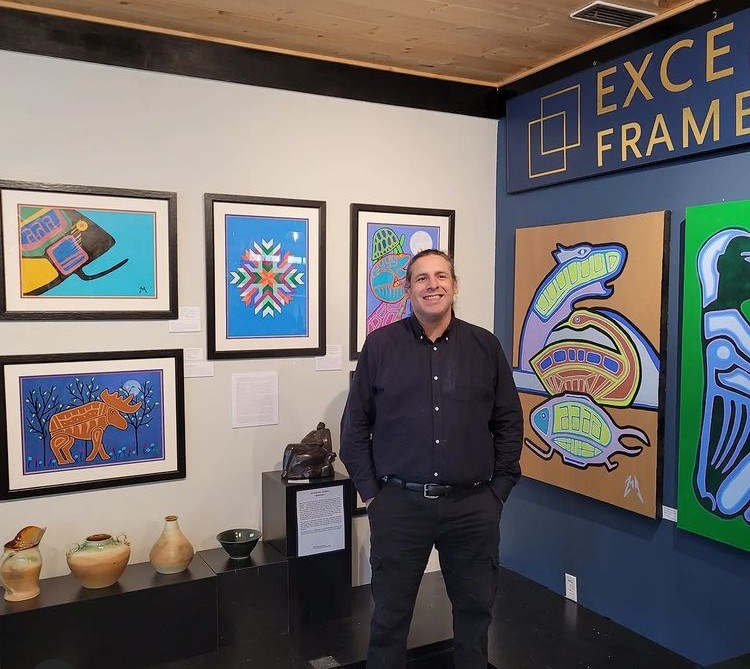 With the help of Spence, Alexander was connected to Stó:lō and Sḵwx̱wú7mesh Úxwumixw (Squamish Nation) master carver Peter Wayne Gong, who has since become somewhat of a mentor to Alexander, along with Kootenay's-based Ojibwe artist Mark Anthony Jacobson. Gong created the chest which Alexander will paint to honour his grandmothers.

Not knowing Gong before meeting him Alexander said he was quick to see how respected Gong is.

“The evidence is hanging on his walls and with people visiting him all the time. There's someone coming through with a gift for him, someone dropped off some eagle feathers for him, someone brought some art for him.”

While moving to Vancouver hasn’t had a big influence on his art as it might have had on others work, Alexander said while he was living in Kamloops in May 2021, he learned very quickly about where he was living.

“I lived within five kilometers of the Kamloops residential school, when all hell broke loose over there. And so you kind of learn a lot, very quickly about where you live if you're open to listening to the experiences and stories of people who called that place home,” Alexander explained. “I see myself as a guest here, anywhere in B.C., so therefore, I think it's my sort of job to take the time to find out about how things are here, and so that definitely has an impact on what I do and how I do it.”

Alexander said that while it’s much easier to blame people for things, when “we choose to be wilfully ignorant and when we refuse to look at Canadian history,” cruelty is allowed to exist when people refuse to look at the true history.

“When you do, you're going to find all sorts of really sad, tragic sorts of history, but also some of this resilience that is unlike anything I've ever seen before. … I am really glad that I'm meeting people that are benefiting from what I think is a shift for the better in Canadian society,” he said, adding that the unmarked graves found at Tk'emlúps te Secwe̓pemc has pushed for a universal understanding that it was “unacceptable.”

“There's no way we can look away from this anymore, which in turn sort of makes it possible to talk about some of the details of what reconciliation actually looks like.

“As horrific as this is … I don't think any of us are going back to a time where we're you can sweep this one under the rug. It’s too shocking. It's too big.”

How that translates to his work, Alexander said when speaking of reconciliation, it means decolonization. And that includes himself and his work.

“I'm not just painting animals and trees and stuff. … What I'm trying to do is express what I understand, and what I understand about the natural world around me and my relation to it, as a part of it, not as a person in control of it. … Describing these relationships is the job of storytellers in Anishinaabe culture.

“We are very gifted people to be able to be charged with the keeping of these stories and these teachings.”

Charlie Carey is the North Shore News' Indigenous and civic affairs reporter. This reporting beat is made possible by the Local Journalism Initiative.