Milder weather draws black bears out of hibernation and, unfortunately, into Squamish neighbourhoods
Apr 13, 2017 10:59 AM By: Rosemary Newton 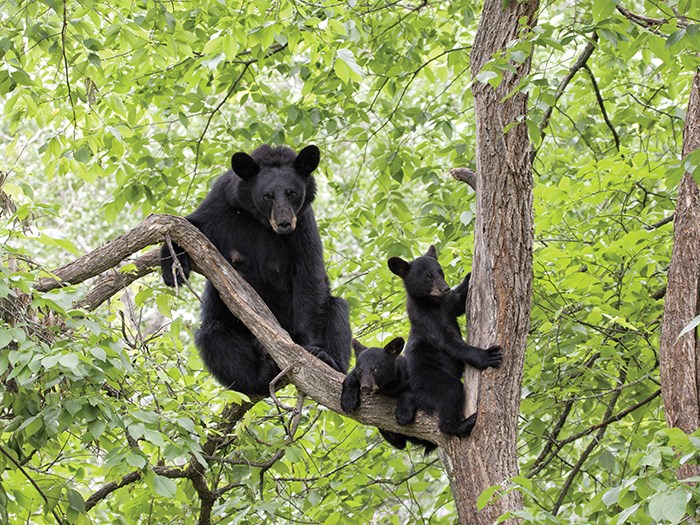 A black bear and her cubs carefully balance in a tree.Shutterstock

As spring arrives and bears are heading out of hibernation, experts agree it’s time for Squamish residents to brush up on their bear-aware skills to ensure positive co-existence between bears and human residents.

“We did have a report of a sow and three cubs trying to access a locked garbage container on March 23 of this year already, and so we want people to always be vigilant in terms of securing all their attractants,” he says.

Attractants, like food and garbage, can lure bears. Smaller animals like rodents can also flock, in turn causing predators like bobcats, cougars, wolves and coyotes to be attracted. According to Schumacher, bears can become dependent on human food.

“They go to great lengths to try and get human food because they get so many more calories from garbage than they can from picking berries or eating grass.”

Becoming addicted, the bears will only seek that food and associate people’s homes with human food. “When they start entering people’s homes for food we don’t have any other choice but to destroy that animal… If you remove the food source the bear has no reason to be there.”

The recent addition of garbage totes to the Squamish area has lots of benefits, he says, but have also introduced some new problems. Previously, people would store their garbage in a garage or in a shed. Now, green totes are often left in people’s yards, leaving tonnes of unsupervised time for bears to get their noses in them.

“All it takes is one container to be left open, unlatched, for that bear to realize that’s where to get food,” Schumacher says, and urges residents to store containers in a shed or garage if possible.

In October, 400 containers had to be replaced, he says.

In addition to securing attractants, he stresses people need to be vigilant and aware they are in bear country. This includes not just knowing how to prevent a conflict, but what to do in an encounter. It’s also wise to remember that under the Wildlife Act, black bears are designated as dangerous animals.

“One misconception is that they’re not dangerous. Then some people think they’re the most dangerous things in the world.”

Last year, he says there were two bear-related injuries in Squamish. Though predatory attacks have happened in B.C., they are generally defensive.

“It’s usually a surprise type of thing, somebody turns a corner and a bear is in their garbage and the bears tries to get away and the person gets knocked over or scratched on the way by.”

He doesn’t anticipate a higher bear population this year, as populations fluctuate up and down, but the likelihood of human-wildlife conflict does increase as more people are out in the back country.

“Bears aren’t out there to hurt us… You just have to be cognisant.”

Another misconception, he says, is that calling the conservation officer service means the bear will be destroyed.

“That’s not the case at all. We get into this job to save wildlife,” he says. “We do everything that we possibly can to avoid destroying bears and public education is the number one thing we can do.”

He recommends bear spray because there has never been a related fatality and it is more effective than a fire arm.

“I’m used to bears charging at me… but [still] it’s a fine motor skill to aim and shoot a fire arm.”

In addition to black bears, he says grizzlies are present on the outskirts of Squamish and Whistler and on the sides of the Sea to Sky Highway.

Rachel Forbes, executive director of the Grizzly Bear Foundation, agrees that being bear aware is the most important thing you can do to protect yourself – and bears.

“If you’re going out in the backcountry, do your homework, talk to a guide or to a conservation officer to know if there have been recent grizzly bear sightings in the area.”

She seconds bear spray as an ideal choice, but stresses the need to know how to use it. Portable electric fences are another recommendation for hikers and backcountry campers. The fences are lightweight and can be easily set up around your tent.

When it comes to grizzlies, she says there are plenty that people aren’t aware of.

“One of the big misperceptions is that grizzly bears are ferocious animals that will attack you, although that is a possibility that can happen, it will usually only happen if they are provoked to do so.”

Provocation includes any endangerment of their cubs.

On the other side, grizzly bears are also a threatened species in some areas of the province, she says.  “Overall the population needs better protection in order to ensure its long-term survival.”

Threats to grizzlies include issues around habitat, food sources, management by the province of environmental laws and the grizzly bear hunt. In addition, where there in a human-grizzly conflict, the bear is usually put down.

Last summer, she says grizzly bears were spotted in places they’re not typically seen, like on the Sunshine Coast, she says.

“Scientists are not sure what precipitated that, it might have been looking for new food sources, but it’s unclear.”

That being said, she says there is no reason for a grizzly to come into a town like Squamish unless it’s absolutely desperate for food. According to Forbes, there has been pressure on food sources like salmon and pine nuts this year.

“They can be struggling to put on enough weight in the summer prior to going into hibernation.”

The Grizzly Bear Foundation would like to see the expansion of the bear viewing industry, but with regulation, making sure guides are certified and there are proper animal welfare practices used. “We would like to see it done well.”

Thomas Reissmann is the director of the documentary The Grizzly Truth, a film that looks at the grizzly hunt in British Columbia. It looks at various arguments brought forward by hunting organizations and special interest groups, as well as conflicts between hunters and bear viewing operations.“This intersection of First Nation rights, tourism, hunting rights, environments, it really fascinated me,” he says. “I was quite surprised as a foreigner that this iconic species, which is part of the Supernatural British Columbia campaign, is also being hunted.”

While grizzly hunting is not legal in the Squamish area, in B.C. as a whole, 573 grizzly bears are allowed to be killed in the province each year.

While shooting the documentary in B.C., Alberta and Montana from April to November of last year, he says he learned a lot about the iconic bear.

“The most surprising thing was we have this notion of the grizzly bear as this dangerous and ferocious animal… I came to realize we really have a wrong perception of these bears.”

He says the most important thing for the grizzly bear’s conservation is survival.

“A part of the documentary is dedicated to this notion of coexistence with bears, and what can we do in order to reduce human-bear conflict because a lot of times these bears that get caught up in that conflict get captured and destroyed. It’s an important part of saving bear lives too.”

There are approximately 15,000 grizzlies in B.C. Reissmann says declining salmon stocks, habitat destruction and logging are other dangers to the grizzlies, but ending the hunt would be immediately beneficial.

“A short-term, easy solution is that we aren’t going to take out these grizzly bears.”

The film became available on Vimeo On Demand on March 30, 2017. Proceeds from the film will support the Raincoast Conservation Foundation and the Pacific Salmon Foundation.

Conservation Officer Schumacher stresses that residents should call the conservation officer service at  1-877-952-7277 with any sightings or issues, and to keep in mind one important detail.

“They were here before us and we have to learn to co-exist with them.”