From a hippie childhood to achieving a dream

Inis LeBlanc stays true to values she learned while living in the woods
Apr 16, 2015 8:57 AM By: Christine Endicott 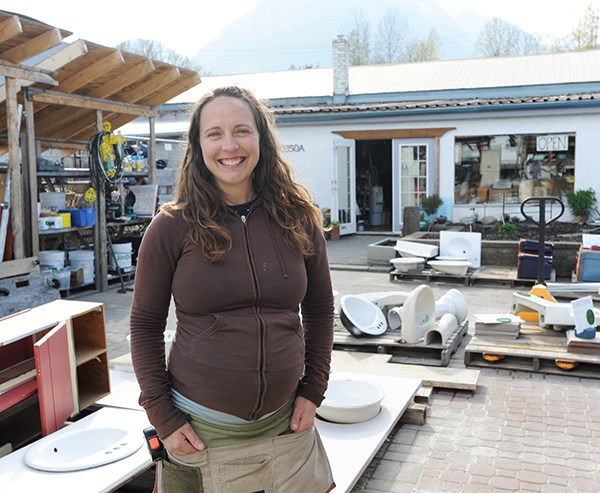 Inis LeBlanc’s story begins in a cabin in the woods as a young child.

LeBlanc was the child of hippies who chose to live in a cabin on Prince Edward Island without electricity or running water. They pumped water to bring into the house and chopped wood for heating.

“I literally grew up in the woods,” she explains. “That was my playground. We had no TV, no electricity. It created that very deep connection with nature.”

It’s where she learned values that have led to her success in Squamish.

LeBlanc, the founder and executive director of Squamish ReBuild, met me for coffee at a coffee shop downtown, where she asked for a mug instead of the disposable cups that most people receive. And why would she not use a reusable mug? LeBlanc learned early not to create waste and to respect her environment.

It was in early childhood in the cabin, growing up with parents who had embraced the back-to-the-land movement, that she forged a deep connection with nature.

When she was seven, her family moved into a house with running water and a shower – which to her seemed heavenly – but her early years as a child of nature had guided the course of her life. She chose to study biology at Dalhousie University in Halifax with an emphasis on ecology. After graduation, she found work in the field right away and spent years moving around to different places to conduct wildlife research.

“Probably the most amazing opportunity was a volunteer opportunity. I was flown up to Alaska and worked in very remote areas,” she recalls. Living in a tent with one other biologist, she did fish tagging and saw no other human beings for two months. Food was flown in by floatplane, and she was trained how to use a shotgun, which she carried at all times in case she encountered a grizzly. She saw moose and caribou every day. “We were literally on land that had not been touched,” she says. “The trails we followed were wildlife trails, made by bears and caribous.”

After two months, she and her colleague had to be evacuated due to rapid flooding. She recalls a worrisome night as they waited for the floatplane to bring them to a safer camp.

But LeBlanc continued wildlife research for a decade, taking jobs from Missouri to Vancouver Island and even Australia. She estimates she’s had 70 jobs in her life, many of them short contracts doing research in the woods. “Every three months you are looking for a new job. It’s stressful and tiring. I was interested in being out in nature… so I didn’t want to move into management where I would sit behind a desk… but it’s not much of a future, financially, at the technician level. I wanted to settle down.”

Ten years ago, she came to Squamish because she knew friends here, and it’s where she has settled and prospered personally and professionally. LeBlanc has a life partner and is now pregnant with her first child.

Her “first baby,” however, is Squamish ReBuild, a non-profit building supplies centre where people can purchase and repurpose used building materials instead of sending them to the landfill. The Squamish Chamber of Commerce named it Green Business of the Year in 2011 and 2012.

After four years, the centre runs smoothly, with a steady supply of people donating used items and many regular customers searching for unique, low-priced items for their projects, from home renovations to children’s treehouses.

For LeBlanc, it was a perfect fit for her beliefs. “I had been looking for a long time, ever since I left wildlife biology, for a job that combines my love for environmental issues and making the world a better place,” she says. She started planning Squamish ReBuild after hearing about a similar centre in Portland, Oregon.

“The biggest thing we are doing is we are creating an opportunity for people to be part of the solution,” she says. “Often people want to do the right thing, and it feels good.”

At age 40, with her baby due in June, LeBlanc also seems happy and excited for the future. She’ll hire someone to run ReBuild and pursue projects of her own for a while as she takes care of the infant. In fact, as we finish our coffee, I note that she has marked in blue pen some measurements on her hand. It’s for a closet in her home she is fixing up. And yes, she’ll use recycled materials to complete the project.

Coffee with Christine is a regular column by editor Christine Endicott featuring Squamish’s most interesting people.