New book explores relationship between an animal and its partner
Feb 10, 2016 9:10 AM By: Rebecca Aldous 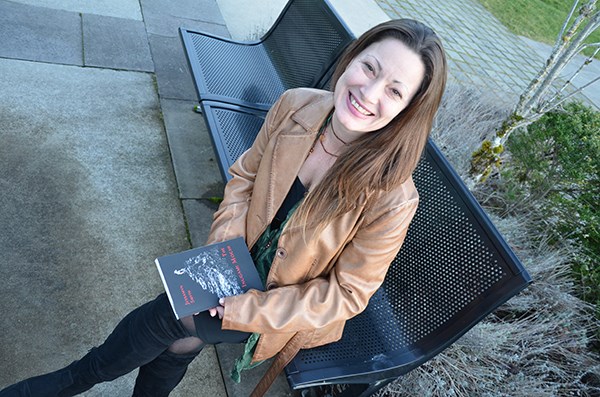 Jessamyn Smyth holds her new book that she is set to launch on Monday at the Crabapple Café.Rebecca Aldous

The mile-long, dirt driveway through the woods served as a bridge between two worlds.

Any frets, school yard taunts or urban fears drifted from the mind, leaving it to be filled with the wonder of the Green Mountain National Forest. In the middle of the Vermont park sat the Homer Noble Farm. It was one of American poet Robert Frost’s summer stops, a house cared for by Jessamyn Smyth’s grandfather Ted Morrison.

In the summer, the woodlands and old Victorian farmhouse became Smyth’s magical world as she accompanied her grandfather to his baby, the Middlebury Bread Loaf Writers’ Conferences – the oldest writers’ conference in America.

“My days were spent with Hercules,” the Quest University humanities professor says, explaining that Hercules was a massive wolf-hybrid dog. “He was our nanny.”

Smyth would explore the woods with him by her side, watch the deers’ white tails pop up as they neared, sneak up on the ruffed grouse. When the sun had reached midday, she’d lie on the steps of the porch and listen to a nest of garter snakes moving underneath the stone.

“My relationship with forest and animal life is the wellspring for everything for me.”

So too is Smyth’s love of words. The first item she latched onto as an infant was not a cuddly teddy bear, rather a dictionary. Smyth still collects and reads them today. There’s no denying being surrounded by America’s great writers at the writers’ conference seeped into her veins, she says. At the age of five, she was already reading poetry by Edgar Allan Poe.

In Smyth’s new book, which she will launch at the Crabapple Café in Brackendale on Monday, Feb. 15 at 7 p.m., her love of words and nature come together. The Inugami Mochi takes its title from a Japanese folkloric family – one part fur, one part beast; a bond in which the dog god, Inugami, functions as a stalwart spiritual and territorial defender to its human. The fictional work explores the relationship between an animal and its partner beyond the shackles of domestication.

“The whole book is about this extraordinary relationship that goes way beyond a pet relationship,” Smyth says, noting throughout history, there have been names and stories for bonds that have been simplified and muddied down to owner and animal title in today’s society.

The novel has been received well by critics. It’s a bit of a relief, Smyth admits, noting she had practice dealing with feedback as a child at her grandfather’s writers’ conference. The main lesson she remembers from the Bread Loaf didn’t come out of a book. Smyth clearly recalls the moment she mustered up enough nerve to share a poem with Morrison. It was terrible, she admits, a rip-off of Frost’s work and not deserving. However, her grandfather was able to find the one line that was uniquely hers and praise it.

“And he just didn’t say anything about the rest.”

It’s a teaching she uses today as a professor and one she nurtures at the Quest Writers’ Conference, which she started last year. This year, the conference takes place from June 12 to 19 and will include Canadian fiction writer Anne Fleming, Jane Urquhart and Pulitzer Prize winning poet Vijay Seshadri.

Smyth believes that one day, the Quest conference will be as big and instrumental as the gathering her grandfather initiated. Writers will always have an important role in the world, she notes. No matter what technology comes about, Smyth points out telling a compelling story is key to enhancing compassion and understanding.

Smyth is grateful for her summers in the Acadian forests and her grandfather’s teachings – lessons she is passing on. “He is part of the mapping of everything that is best in me.”