Whistler musicians discover what it’s like to have a rock star make an unexpected cameo in their set
Aug 29, 2020 10:30 AM By: Alyssa Noel 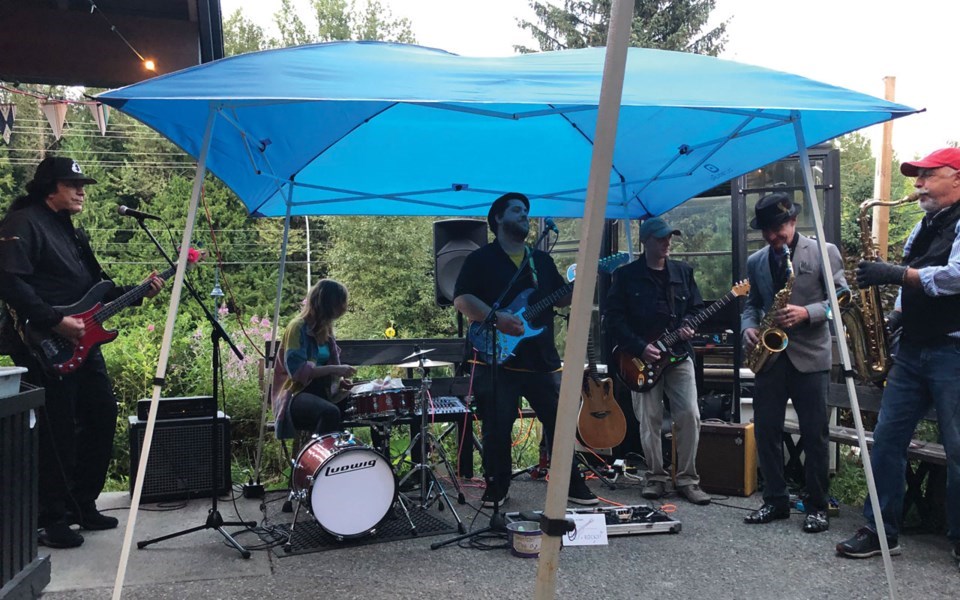 Or at least Kiss bassist and co-lead singer Gene Simmons appeared to be just another member of the Whistler music community last Saturday at the Alpine Café.

The rock legend—who is married to Canadian actress and model Shannon Tweed and has long had a home in Whistler—was dining out at the restaurant with his family while a set of local musicians were onstage.

“It was Kostas [a.k.a. Kostaman] who got the ball rolling with calling him out on the microphone,” recalls Monty Biggins, who was on rhythm guitar and vocal duty at the time.

While Kostaman has a regular Saturday slot at the café, he often plucks musicians out of the crowd to come up and jam. So right after a talented young vocalist played a few songs, he extended an invite to Simmons as well.

The crowd (who, it should be noted, all had to remain at their physically-distanced tables) also helped coax him to the stage by chanting “Gene” a few times.

“He took a moment to see what was happening and if it fit with the moment,” Biggins says.

Kostaman and Simmons had a brief chat and then “he got up and gave me $20,” Kostaman recalls. “We saved the $20 and the pick he played with—the punch line here is he plays the bass with a pick. He was gracious and cool.”

When he started to make his way to the stage, Kostaman turned to Biggins and said, “Gene is going to come up and you’re going to lead the jam.”

For Kostaman, it was a joy to sit back, relax, and let his friends shine.

“I was just watching all of my babies, my representatives, my family, just tearing it up,” he says. “It would’ve been great to play, but from where I was sitting, it was beyond great. I didn’t even think about it; [Monty] is my little brother.”

For his part, Biggins says, laughing, “My first thought was, ‘Oh no. What am I going to play?”

He handed over his bass guitar (with a new, less sweaty strap) and Simmons asked for a pick.

“I hand him one and he plays this funky bass line,” Biggins says. “The band just joined in. We let that evolve for a minute and I realized, ‘OK, I’m the singer. I gotta figure something out here.’”

Luckily in his arsenal he had a funky mash-up of Black Joe Lewis’ “I’m Broke” and James Brown’s “The Payback.”

“We were in a totally different key, but I thought, ‘I have that in my wheelhouse’ and started doing that. I took a break at some point and Gene starts counting down and pointing at different players, giving them solos. It was so organic. It went on like that for 10 minutes,” Biggins says.

From an audience perspective, Isla Robertson said the experience was thrilling, especially considering months of only experiencing music on a screen.

“I turned my head and all of a sudden Gene is onstage putting on a bass guitar,” she says. “I think my brain exploded. I couldn’t believe it was happening.”

As Reichard’s girlfriend, Robertson quickly thought to lend a hand and capture the moment on video. “I got right up front and started filming. I got the whole jam. As much as I was excited to see Gene Simmons play, I was more excited to see how well the guys did and how cool, calm, collected they were. They were a bunch of musicians jamming together,” she says.

By the time the impromptu jam was over, the group had dipped slightly into the neighbourhood’s “quiet time.”

A cop car was already pulling up.

“But by that time, we were packing down, so it wasn’t an issue,” Biggins says. “And it’s Gene Simmons, so we kept going with it. Who wouldn’t?”

If you missed the surprise jam, you can catch Monty Biggins and Kostaman at the Pemberton Hotel for a ticketed show (with ticket info to come) on Sept. 12.