School at the bottom of the world

Quest students get rare glimpse into life in Antarctica
Feb 18, 2016 6:00 AM By: Michaela Garstin 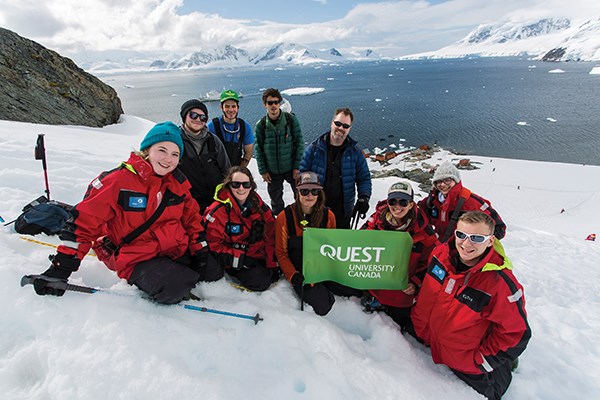 Quest University students stake their flag as they climb a snowy hill in Antarctica.Colin Bates

There’s an old marine superstition that clipping one’s nails brings about a drop in temperature and stormy weather.

“The passage is hardly recognizable shrouded in fog and fluff and the snow leaves the ocean waters slick and inky,” she writes in a blog post shortly after her group passes through the Lemaire Channel on the east coast of the Antarctic Peninsula.

“When the announcement comes… that we are entering what is tellingly referred to as ‘Kodak Crack’ they advise us that the fog has made it nearly impossible to discern the dramatic channel of rocks that climb vertically from the water towards the sky.”

Hale huddles in her room with two fellow classmates, safe from the “bitter snow, wind and mist” that await them outside.

She is one of a dozen Quest University students who visited sites around the southernmost continent to learn about its history and current geopolitical issues, such as the effects of international treaties and climate change.

The university partnered with One Ocean Expeditions, an operator from Squamish, for the month-long adventure that began on Jan. 9.

Luckily, the storm subsided and the passengers and crew returned to enjoy Antarctica’s summer season, where the temperate hovers around 1 C and the sky is never completely dark at night.

They travelled on the Akademik Sergey Vavilov, nicknamed the One Ocean Voyager, a ship that was used to search for a vessel lost in the doomed Franklin expedition of the 1840s. “It was amazing. It exceeded our expectations,” said Bates, who has travelled to Antarctica 40-odd times before becoming an instructor.

“It’s a place that defies description, though we do try. It really is otherworldly there.”

In a rare occurrence, the Quest University group saw three different types of orcas in one day. They encountered a sei whale, one of the largest species, in the Drake Passage.

They’re far from the only life forms there; while polar bears can only be found in the Arctic, not Antarctica, the continent is known as the “land of the penguins.”

Unlike the pristine wilderness many people picture Antarctica to be, the continent is the centre for debates surrounding climate change, marine conservation and resource extraction.

“Antarctica embodies a lot of challenges humanity is facing at this time,” Bates told The Squamish Chief. “It’s a living laboratory for our relationship with nature and each other.”

Bates says it’s their responsibility to bring back the message of what is happening to the environment – a startling phenomenon that some guides have been working in the area long enough to see firsthand.

In addition to climate change, the students discussed the Antarctic Treaty, signed by 53 countries including all the superpowers, that sets aside Antarctica as a scientific preserve without the threat of resource extraction.

It is up for debate again in 2048 – just 32 years away. “It’s a fantastic piece of legislation. It’s pretty amazing to think about how the superpowers can cooperate to meet a common goal,” said Bates, who has previously worked as a zodiac driver on board polar expedition vessels.

He was thrilled to see his students experience the magnificent – and sometimes hostile – region for the first time.

“When I see Antarctica through the eyes of my students, it makes me rethink what I knew before.”

Not many post-secondary students get the opportunity to paint landscapes onboard a vessel as it travels through breathtaking icy passages in Antarctica.

Abby Erdman, who is in her third year at Quest, examined how artists portrayed Antarctica, both historically and today.

“I looked at how artists experience Antarctica differently than, say, someone with a science perspective,” said Erdman, whose project also included a collection of her own small watercolours.

Early explorers, including Edward Wilson who took part in the British Discovery Expedition in 1901, often used art as a way of documenting the scientific record. Contemporary artists, often sponsored by the National Science Foundation, use their art to draw interest to the region.

As part of the fieldtrip, Erdman and the other student were required to complete a project on a topic of their choosing. The eclectic subjects reflect the learning goals of each student.

Olivia Trim investigated the meaning of modern day exploration in a world of Google and GPS, and how it has changed since the first explorers visited the continent. “We still have exploration, but in a slightly different vein,” she explained.

The classic polar explorers, including Ernest Shackleton who took part in the period known as the Heroic Age of Antarctic Exploration, travelled with ideals of nationalism on the top of their minds. Today, however, many people visit the region for personal reasons, including mountaineering and gathering scientific evidence.

Francesco Varoli, a fourth-year student, compared old and new equipment used to discover geographical areas of Antarctica. He noticed there were a lot of similarities despite the different decades.

“It seems not a lot has changed, but in extreme environments like this even a minute change has a big effect,” he said.

In terms of footwear, he noticed the basics of insulation have remained consistent. At first, grass was used as padding to trap dead air space between a person’s feet and the ice.

The same principle applies today to foam that is injected with bubbles.

For her project, Kathy Hale focused on what people learn about Antarctica through narratives on the continent. “There’s a narrative about Antarctica as a pristine wilderness. It may be the closest we have to this, but it’s glossing over the real threats,” she said, listing climate change and poorly regulated fishing operations as the paramount dangers.

“It’s our personal responsibility to include these threats in the stories we tell.”

For an in-depth look at the student’s expedition, follow their blog at tantalus.questu.ca/cbates.