“When I was a little girl, my late papa used to take me up to Squamish every other weekend. We would pass by the Chief, go way up into Squamish Valley and go hunting or berry picking…. I’d get so excited because my papa would tell me the story of the two-headed serpent every time we’d pass by it.

“He’d time it just right so at the part in the story when the snake goes up over the mountain, he’d point out the mark going all the way up. That was a huge impact when I was a child. I loved it.”

From the North Vancouver offices of the Squamish Nation where she works as a language teacher and translation specialist, Rebecca Duncan, Tsitsayxemaat, recounted how she came to know the story of the Sínulhka, the two-headed serpent. This story features prominently among Squamish narratives involving the Stawamus Chief, a mountain known historically as Siyám Smánit.

Duncan went on to tell the tale of the Sínulhka. It was a massive two-headed serpent that once roamed through the Squamish territory, its horrible shrieks frightening the people in the village of Stá7mes, Squamish. Xwechtáal, a young warrior, was tasked with killing the serpent. He pursued it up Siyám Smánit where it left a striking black streak, now known as the Black Dyke. For four years, Xwechtáal pursued the serpent until he was able to slay it as it rested in a lake.

From its body, he procured a special bone with which he was able to induce trances in other beings, an ability which granted Xwechtáal substantial power. He stopped at neighbouring villages, gaining many wives on his return to Stá7mes.
Stá7mes was one of the major villages in this region.

“It’s perfect in its location at the mouth of the Squamish River: you’ve got the salmon going up and also all the shellfish in the bay, the hillsides have deer and bear, and then the Chief being the protector, rising up there,” noted Duncan.

Hers is one of many Squamish Nation stories behind the Stawamus Chief.

The name, Stawamus Chief, is somewhat dubious. Its title in the Squamish language, Siyám Smánit, refers to something that is deeply respected like a leader, a role model, a teacher or an elder, not a chief per se.

He noted the error in the word Stawamus, as well. “As far as I can tell with my linguistic training, Stawamus is an attempt to spell a word in our language: Stá7mes. I think the reason the ‘w’ is in there is whoever wrote it that way was trying to capture the glottal stop, which we use a seven to represent nowadays. So it got written down as Stawamus and then that got transposed on to the nearby reserve named the Stawamus Number 24 Reserve.”

Khelsilem went on to retell the creation story of Siyám Smánit that he had been told in his youth. It occurred during a time when four brothers, supernatural beings called Xaays, came to this region to give teachings and moral understandings of the world to people who were living here.

“The mountain, this granite monolith, was originally a longhouse, and there was a potlatch or a big feast going on. The longhouse was transformed into this mountain. All of the spirits that were in the longhouse at the time of the transformation were stuck inside and so on the rock face today, you’ll see different animals appearing through the rocks.”

“A lot of our elders and people often look at it and try and make interpretations of what they see, the same way people look at the stars or clouds and make meaning out of it,” said Khelsilem.

Duncan commented that seeing a face in the rock is a mysterious event.

“They’re hard to spot. All my life, I’ve looked and looked. Just recently, during an event at Totem Hall, I went and stood outside and I finally saw one, clear as day. It was the face of a man.”

Joshua Joseph, Skwetsi7meltxw, is currently the youngest councillor for the Squamish Nation. As he was seated outside of Totem Hall, he looked up to Siyám Smánit and explained how the mountain is significant to him.

“I grew up hearing many stories around the Chief. It’s right on the land that our family comes from and it’s significant – of high importance – to our family.”

He has to yet to spot any faces in the featured granite, but he was happy to discuss existing narratives associated with the mountain. As he explained some different pieces of history, he did so without pointing up to, indicating this is a sign of disrespect to Siyám Smánit.
Joseph says that he has always wanted to climb the Chief, but has never gained the necessary skills or experience, so he usually opts to run up the backside instead.

“I can really feel it when I’m running through there, that spirituality and energy. I think it’s imperative that we tell our story because people don’t know.

“We just see this mountain; it’s beautiful and it’s amazing to climb or hike, but no one knows the history and the stories around it.” 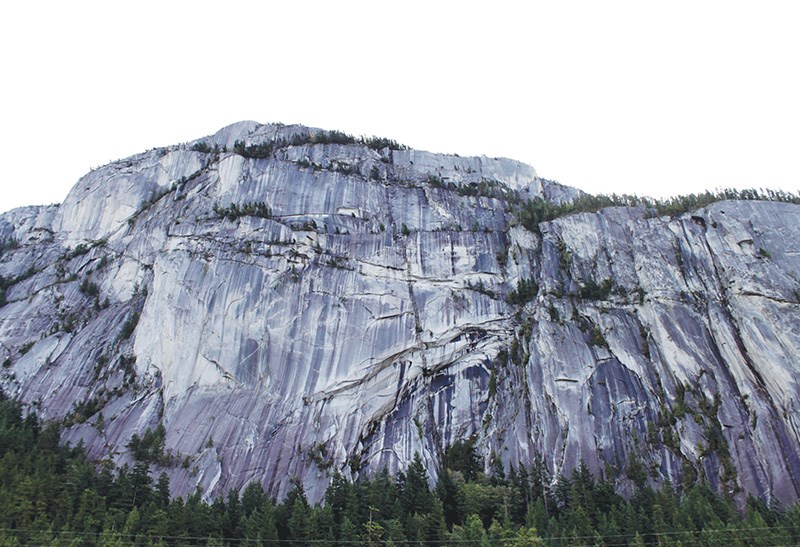 Sea to Sky mountains featured in poster from the Squamish artist who brought you 'Sh*tty Plants'
Nov 17, 2022 11:06 AM