'We are all eager for direction on movements for justice and reconciliation, and Chief Dan George provided decades of inspiration, hard truths and guidance to all of us.'
Jun 11, 2021 9:09 AM By: Elisia Seeber, Local Journalism Initiative Reporter 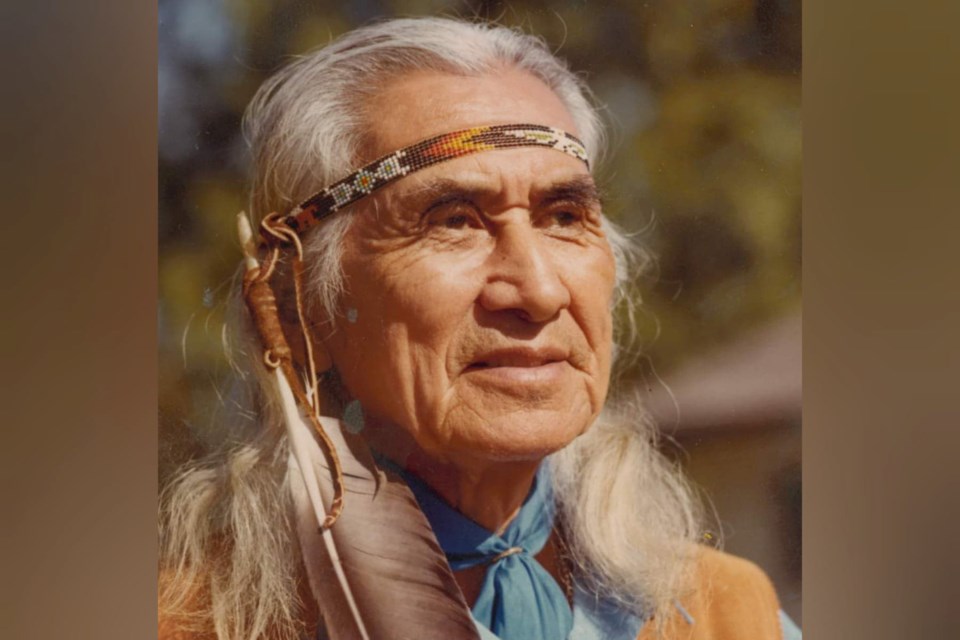 The Chief Dan George: Actor and Activist Exhibit is open at Maplewood Flats Thursday through Sunday to August 29, 2021.Wild Bird Trust of B.C.

When the late Tsleil-Waututh Nation Chief Dan George, Tśētsawanexw and Stalaston, spoke of reconciliation, he would say, “the only thing that can truly help us is genuine love.”

These are words George wrote almost five decades ago in a column that appeared in the North Shore Free Press – an early iteration of the North Shore News – on March 1, 1972.

They are words that still ring true to this day.

In the wake of discussions of genocide of First Nations peoples and the process of reconciliation this month, a new exhibition based on George’s life and legacy offers a source of knowledge, guidance, and inspiration for the path forward.

The Chief Dan George Exhibit: Actor and Activist, originally developed by MONOVA: Museum of North Vancouver, is currently being exhibited by The Wild Bird Trust of British Columbia and is on show at the Maplewood Flats Conservation Area in North Vancouver. It focuses on George’s influence as an advocate for the rights of First Nations Peoples in Canada and beyond as well as his career as a television and film actor.

George began his acting career in 1960 with a role in the CBC-TV series Cariboo Country and would later become well known for his role in the 1970 Hollywood movie Little Big Man, starring Dustin Hoffman.

But, he was much more than a film star, he was a voice for his people and while the sun has set on his time on Earth, there's still much we can learn from him says Irwin Oostindie, president of The Wild Bird Trust of B.C., which manages the conservation area.

“Canadians are again being confronted with Canada’s genocidal actions against Indigenous peoples,” he said.

“We are all eager for direction on movements for justice and reconciliation, and Chief Dan George provided decades of inspiration, hard truths and guidance to all of us."

Oostindie said the exhibit on George features stories and artifacts, including paintings, photographs and memorabilia, and was developed by MONOVA in close collaboration with the Tsleil-Waututh Nation and the George family.

While the words George wrote in his column back in the early '70s are nearly 50 years old, they still resonate today as Canada ventures into a new age of truth and reconciliation while also grappling with a global climate emergency.

He talks of respecting Mother Nature, sharing how as a child he grew up in a communal 80-foot-long smoke-house and learned from his father to live off the land, fishing and hunting and taking only what was needed. He writes that he finds it hard to "understand how men not only hate and fight their brothers, but even attack nature and abuse her."

"I know that my white brother does many things well, but I wonder if he has ever really learned how to love," he wrote. "Perhaps he loves the things that are his own but has never learned to love the things outside and beyond him. This is not love at all! For man must love all creation or he will love none of it."

A residential school survivor, he also shared some of his thoughts on reconciliation.

“My culture is like a wounded stag that has crawled away into the forest to bleed and die alone,” George wrote.

“The only thing that can truly help us is genuine love. You must truly love us, be patient with us and share with us. And we must love you with a genuine love that forgives and forgets ... a love that forgives the terrible sufferings your culture brought ours when it swept over us like a wave crashing along a beach … with a love that forgets and lifts up its head and sees in your eyes an answering look of trust and understanding.”

As well as an in-depth look at George’s life, the exhibit also considers other significant figures, events and milestones in the First Nations rights movement in B.C. and Canada and touches on the wider history and portrayal of Indigenous people in film and television.

While the exhibit opened on May 22, the WBT is inviting the public to a welcome reception on Saturday, June 12 from noon to 1:30pm.

The virtual event features a performance by drummers Nicholas George and Rob George to open the ceremony, which will be followed by words from Tsleil-Waututh leaders and local dignitaries. Oostindie will MC the event and speakers will address the historical and present day resonance of George. Curators from Tsleil-Waututh, the George family and the Museum of North Vancouver will be there to discuss the significance of the exhibition.

Since 2016, the Conservation Area at Maplewood Flats, situated within the traditional and unceded territory of the Tsleil-Waututh Nation, has functioned as a platform for reconciliation and conservation, and practices redress to the Nation.

The public can RSVP for the virtual welcome reception at Chief Dan George Reception.

The exhibit will be on show until Aug. 29 at Maplewood Flats, at 2649 Dollarton Hwy., North Vancouver.

For more details or to book an appointment, visit Wild Bird Trust of B.C.

Elisia Seeber is the North Shore News’ Indigenous and civic affairs reporter. This reporting beat is made possible by the Local Journalism Initiative.

Cultural tour to share the deep connection Tsleil-Waututh have to Maplewood Flats
May 30, 2021 12:05 PM