To my teenaged self: An Afro-Indigenous woman’s contribution to Tegan and Sara’s new video

DJ and Squamish Nation councillor Orene Askew transforms the wisdom she has acquired into a message for who she was as a student at Carson Graham Secondary
Jul 29, 2020 7:26 PM By: North Shore News 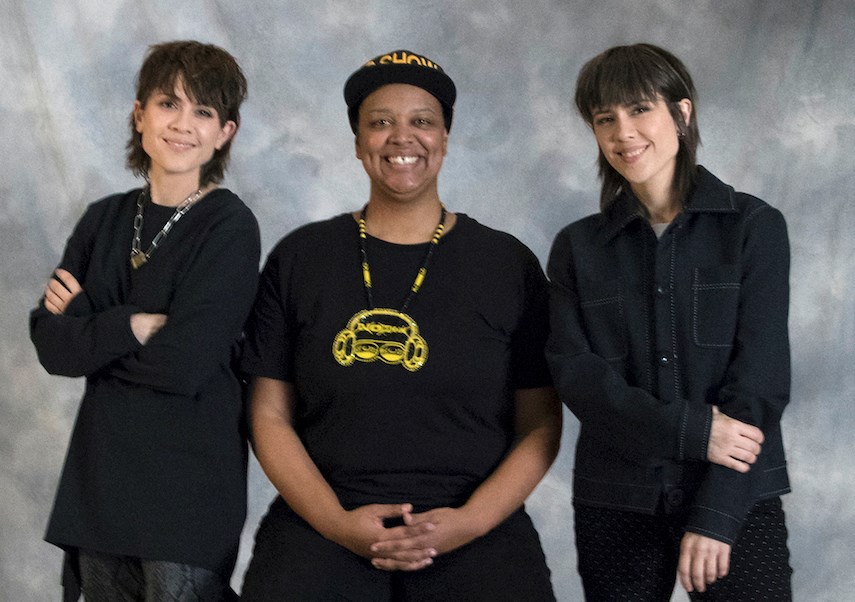 North Shore DJ and Squamish Nation councillor Orene Askew was thrilled when Tegan and Sara asked her to be part of the music video for 'I Know I'm Not the Only One.' photo Tegan and Sara

You can see hints of the woman Orene Askew was about to become in her high school yearbook photos.

It’s the early aughts of a new millennium. Askew is a student at Carson Graham Secondary in North Vancouver. One year she decides to go for a sporty look. It’s just a head shot so you can’t tell she’s 6’2” tall but you can definitely tell she loves basketball. In another photo, she’s about to graduate. Her smile is joy-filled. Is it the future she’s excited about or just the thought of leaving high school?

Almost 20 years later, musicians Tegan and Sara asked Askew to look at her high school photos and think about what she’d like to tell her teenaged self.

Askew was 25 when she plucked up the courage to tell her parents that she was two-spirited, a sexual identity exclusive to First Nations people. They were eating dinner at their home on the Capilano reserve and her parents didn’t skip a beat. “We know,” they said, and continued eating as if everything was normal. And that’s because there is nothing abnormal about being LGBQT+.

“When I finally did come out, it felt like a 50-pound weight was off my shoulders,” Askew says in an interview with the North Shore News. “I know that coming out seems like a simple concept but it’s not. It would be difficult to tell a teenager today, ‘Just come out. Just be who you are.’ Everyone has to go through it on their own.”

Askew is Afro-Indigenous. She might have seen herself as a follower when she was a teenager but today she is known as a leader in many fields. She’s a first-term councillor with Squamish Nation. In 2018, the Vancouver Pride Society presented her with the Kimberly Nixon Trans, Two-Spirit, Gender Non-Conforming Contribution to Community Award. Vancouver Pride also invited her to be the first-ever Squamish Nation member to be grand marshal of the annual parade. She shares her love of music and dancing as DJ O Show and has performed at Rogers Arena.

That’s why she was a natural “ask” to be part of Tegan and Sara’s new music video. Filmed in Vancouver in March, just before the coronavirus shut down the very idea of having a group of people in the same room, the video features a song that Tegan and Sara wrote when they were in high school. It’s part of their Hey, I’m Just Like You album which is itself a complement to their memoir, High School, about the Grammy-nominated and Juno-winning twins’ early life in Calgary.

“I didn’t know much about the music video but when I heard it was by Tegan and Sara, I love them so much that I just went running,” Askew says of her reaction to being invited to the video shoot along with other performers and activists such as Dan Mangan and MasterChef Canada’s Matthew Astorga.

Thank you @teganandsara for letting me be apart of your latest music video, “I know I’m not the only one!” Shot pre-Covid!! It was so much fun!! LINK IN BIO!! #teganandsara #djoshow #dj #djlife #yvr #vancity #vancouver #iknowimnottheonlyone #musicvideo #fun #youtube #loveislove #pride #business #entrepreneur #grateful #linkinbio #fun #life #workhardplayhard

Each participant was asked to wear something reminiscent of their high school days. Tegan wears a Nirvana T-shirt. Sara wears an over-sized green hoodie. Askew chose a black DJ O Show T-shirt and a beaded indigenous medallion. And, yes, her smile shows that whatever she was thinking about on photo day was warranted.

“I haven’t changed that much,” she says with a laugh.

What she yearned for then is what she’s able to fulfill today — having visible LGBQT+ role models in her life and as part of the greater community.

“When I was a teenager, I didn’t really see anybody like me or even the definitions of what it was to be LGBQT+. We’ve come so far, which is why I think the theme of this album is brilliant.”

Now that she’s thought of what she’d like to say to her teenaged self, what would she like to say to the Orene Askew of 2040? “It would be really hard to achieve because of the pandemic, but I’d like her to be someone who has seen the world and done everything she wanted to do.”