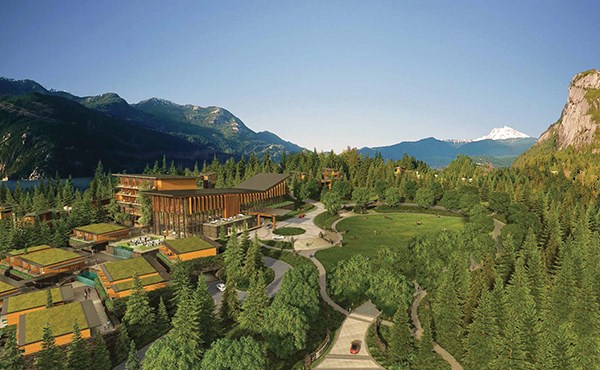 A rendering of the planned Lodge at Klahanie Resort, which is slated for across from Shannon Falls Provincial Park.Submitted

The off-again, on-again Klahanie Resort overlooking Howe Sound is back on with a new multimillion-dollar plan.

The resort is to be built on 34 waterfront acres at the gateway to Squamish across from Shannon Falls Provincial Park on land owned by West Vancouver’s Bahadur Karim. Klahanie was first proposed in 2007, but when the economy took a downturn, so did the project.

The new configuration is for a $400 million, five-star destination resort, hotel, restaurant and spa.

An open space, called “The Great Lawn,” is slated for the entrance to the project.

“Providing a public space in Squamish to be able to take in the falls and the Chief and to be able to gather,” said Paul Fenske of Ekistics, the Vancouver architectural firm in charge of the project.

In addition to a 50-unit upscale hotel, the project includes 75 cliffside-terrace suites with individual ground level entrances that step down to a pool, according to Fenske.

Sixteen 1,600-foot family-sized villas would be adjoined to the hotel by a footbridge and sit on the southern waterfront. An upscale, full-service campground with 34 “canopy suites” will be on the northwest portion of the site, homage perhaps to the current Klahanie Campground that has existed on the site for close to 40 years and will eventually be displaced by the project.

Forty-two residences that can be purchased for portions of the year round out the resort’s accommodations.

Plans also include a lodge with a restaurant and culinary school where guests could learn from celebrity chefs, a 33,000-square-foot spa and fitness centre and a full-service activity dock, according to Fenske.

An economic study to determine the number of jobs the project would include has not yet been done, but Fenske said the number of employed would be substantial.

He said the time is right for the resort with the growing attention paid to Squamish and the improved economy. The project is also smaller than that first proposed in 2007, which makes it more appealing and viable, according to Fenske.

“It was a more traditional tower hotel,” he said, adding the original plan also included a number of townhouses. “Having that volume of development on the site, we felt diminished the natural characteristics of the site and so our approach has been to touch [the land] less to gain more.”

“Klahanie” is a Chinook word that roughly means the great outdoors, Fenske said.

“It is very much in line with what our brand is and what we offer in the community in terms of activities,” said Mayor Patricia Heintzman.

Almost all of the property is already zoned for the development. Only the area of the villas near Darrell Bay has yet to be rezoned from resource to commercial, Heintzman said.

“They are pretty much ready to go,” said Heintzman.

She said she hopes the proponents will work with the Sea to Sky Gondola.

“When you think about the gondola and the parking issues there, maybe there’s a synergistic opportunity with that,” she said.

A BC Hydro right-of-way goes through the property, but the proponents are in negotiations over that issue, according to Fenske. The hydro lines would need to be moved, he explained.

Assuming negotiations with BC Hydro can result in an agreement on the lines, the proponents will next hold open houses in Squamish and then go before Squamish council for a rezoning of the one remaining parcel and a development permit for the rest of the project. If all goes according to plan, shovels could be in the ground in 2018, according to Fenske.