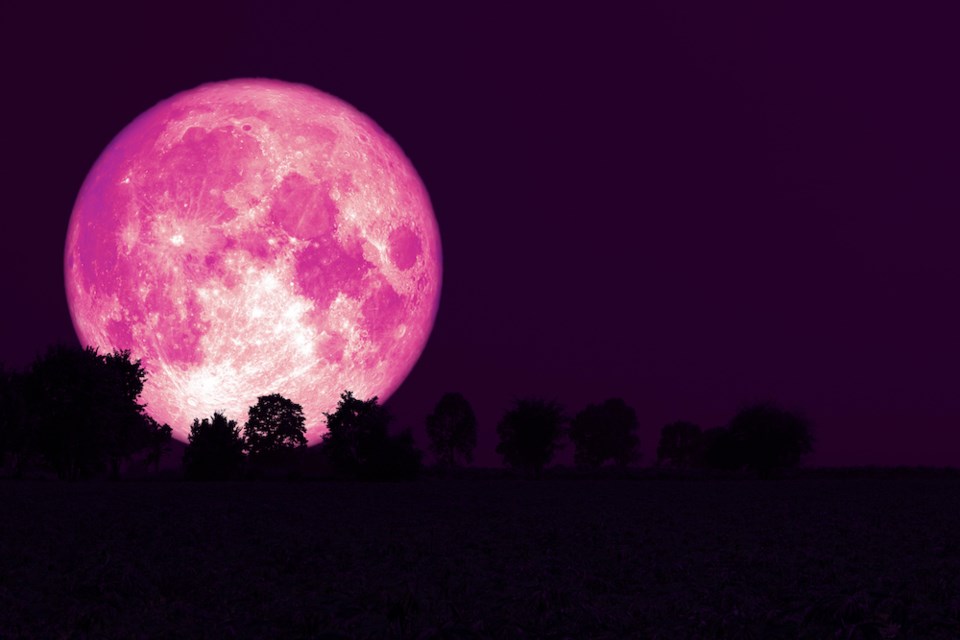 April's full pink moon will also be a supermoon this year in Vancouver, which means it will look bigger than usual.Photo via Chayanan / Getty Images

This year, April's full moon, known as the "pink moon," is also considered a "supermoon."

What in the world does that mean?

No, the lunar behemoth won't possess supernatural powers or super-celestial abilities - it will simply look bigger.

Known as the "Pink Moon," April's full moon is set to rise over B.C. skies on Monday, April 26. In Vancouver, the moon will appear at its fullest at 4:13 a.m., so unless you're a super-late night owl or a super-early riser, you will still catch the heavenly body in all its super glory on Sunday night (April 25).

Why is called a pink moon?

The Old Farmer's Almanac notes that the Pink Moon got its name from, "heralding the appearance of the “moss pink,” or wild ground phlox—one of the first spring flowers." They note that Native peoples would give distinctive names to each reoccurring full moon to mark the change of seasons. As such, many of these names arose when Native Americans first interacted with colonialists.

With that being said, Space.com notes that the April full moon also goes by other names including the Full Sprouting Grass Moon, the Egg Moon, and the Full Fish Moon.

Since the pink moon qualifies as a "supermoon," It will look a whopping 15 per cent brighter and seven per cent bigger than a regular full moon due to its proximity to earth.

EarthSky notes that astronomers usually refer to "supermoons" as perigean full moons--a term that simply refers to the moon being "near earth."

Sky-watchers should opt to travel as far away from city lights as possible in order to avoid light pollution that will obscure the clarity of heavenly bodies. While this works best in more remote places, anywhere that has a higher elevation will also provide more ideal viewing conditions.