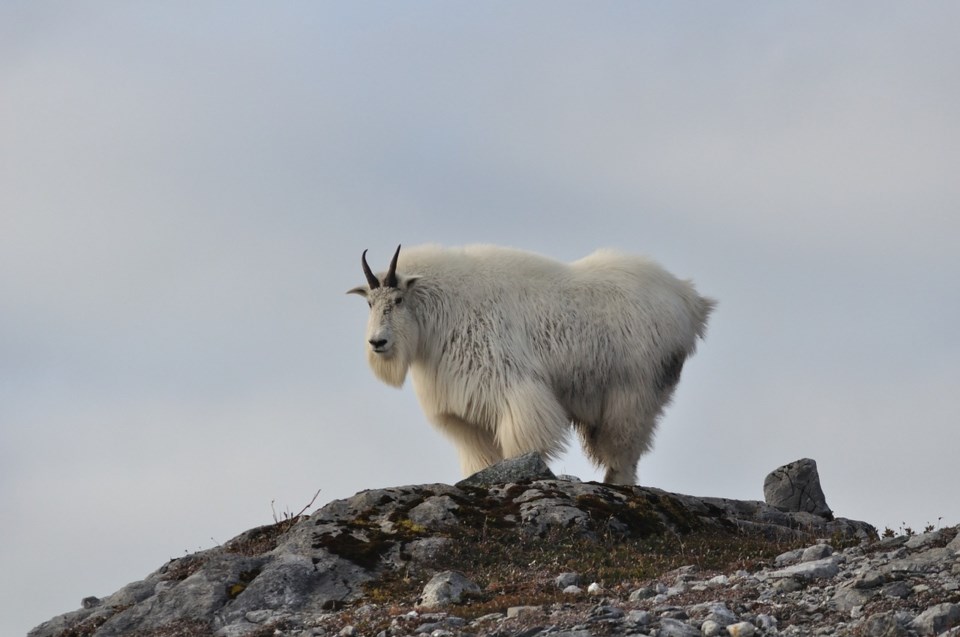 After learning of a new proposal for a wilderness lodge on Brohm Ridge near Squamish, a co-founder of BackcountryBC is raising concerns about the location of a designated winter range for mountain goats.

Paul Kubik of BackcountryBC compiled a map with information from the BC government, the wilderness lodge proposal and the Garibaldi at Squamish resort proposal. He says the Ungulate Winter Range  and project areas overlap.

Kubik said he's concerned about the regional impact on migrating mountain goats, road building, increased human presence and operations such as avalanche maintenance and slope grooming. He added that studies of mountain goats have shown they are disturbed by helicopters flying above them. While there haven't been studies on how goats react to wind turbines, which the wilderness lodge included in its proposal as a potential energy source, Kubik said, unlike helicopters, a wind turbine's rotating blades can operate in one place all year.

On April 23, the Federation of Mountain Clubs of BC also released a statement, saying it is opposing the Barrens Expeditions application for a wilderness lodge on Brohm Ridge.

"Until the short and long-term impacts of increased human use on the ecological integrity of Garibaldi Provincial Park — vegetation, wildlife and environment — are considered and planned for in an updated park management plan for the Park, we are opposed to the extension of a road above treeline," wrote the club's executive director, Barry J. Janyk.

It outlines other concerns similar to Kubik's, including impact on the mountain goats and the removal of water from Natasha Lake.

"The proposed lodge and roadway extension are not compatible with the objective of preserving mountain goats due to habitat loss and sensory disturbance from construction activities, infrastructure (i.e., wind turbines) and increased human presence on and near Brohm Ridge and Mt. Garibaldi, disruption of migration patterns — summer and winter— cumulative impacts from the number of projects proposed on Brohm Ridge, and lack of detailed environmental studies of a regional nature," Janyk wrote.

"Rather than developing this attractive alpine ridge, extending the boundary of Garibaldi Provincial Park to include Brohm Ridge would go some way towards compensating for the extensive removal of parkland for the benefit of Whistler / Blackcomb."

Garibaldi At Squamish (GAS) and the wilderness lodge are two separate proposals, but if both are approved, would reside on the north side of Brohm Ridge.

In an email, the Ministry of Forests, Lands, Natural Resource Operations and Rural Development told The Chief that GAS holds an interim agreement with the province that allows them to continue further assessments for developing their masterplan.

"At the point they are able to submit their master plan for formal review, the mountain resort branch of FLNRORD would lead a review process to identify all environmental values such as the ungulate winter range and the potential impacts," the ministry's email said.

Meanwhile, the wilderness lodge's applications are still under review. The ministry added that staff will consider wildlife management impacts as part of the review. The ministry did not state whether either project was inside the designated Ungulate Winter Range or how close either site is to the border.

Rod MacLeod, the vice president of planning for GAS, said the mountain goats live on the south-facing side of Brohm Ridge that is visible from Squamish, because the steep and windy terrain doesn't collect as much snow. The resort is proposed to be on the north side, where there is much more snow.

In an email statement, Don Worthington — the owner of Barrens Expeditions, who proposed the wilderness lodge — said he hired a registered professional biologist, who confirmed his project site would be outside of the Ungulate Winter Range.

In January 2016, part of the environmental certificate issued to GAS included three conditions about mountain goats, two of which MacLeod said the proponent has taken care of.

One of the conditions dictates power transmission lines cannot be located in the spring and winter mountain goat range. Another was about a Lift Q, which will be constructed as an aerial lift.

"Lift Q was going to be a T-bar right up Brohm Ridge, and it's now further north on the north side of the ridge and lower and it's going to be a chairlift," MacLeod said.

The third condition states: "The Holder must ensure ski run and lift development construction activities, including but not limited to vegetation management, snowmaking and grooming of runs on Brohm Ridge will not be conducted during the months of April, May or November, in order to avoid impacts on goats moving between winter and summer ranges."

MacLeod said the third condition will be a construction and operations issue that the proposal will work on. He added that he has been speaking with BackcountryBC and other access groups since concerns about mountain goats were raised last week.

In the Barrens Expeditions applications for an adventure tourism license, road permit and water license, the proposal states the company is aware of the nearby Ungulate Winter Range, but states the tenure site would not be within the boundary.

"It is our view that the proposed lodge site and development will not materially impact existing mountain goat values or habitat along the top of Brohm Ridge," Worthington said in an email. "

This area, including the land around the proposed lodge site, has historically been, and continues to be, a popular destination for motorized recreational users in both the summer and winter.  While mountain goats have been observed are along the west-facing slope of Mt. Garibaldi (which forms part of the UWR in this location), we are unaware of any recorded observations of mountain goats along the ridge area, and in particular near the proposed lodge site."